Sparky Takes a Side Trip

When we are in Wells, ME (Moody Beach Thousand Trails RV park), we are about an hour and a half drive from Sparky's middle brother, Rich, who lives in Bedford, MA. Sparky was super excited to find out that you can take the Amtrak Downeaster from Wells, Maine to a suburb near her brother, (Woburn) and the train station is about 15 minutes from his house. Not only that, but you can take your bike on the train! She decided to book a trip and spend a couple of days with him. Rich planned a great bike ride for us.

Now Amtrak has a terrible reputation for being late--A LOT! But Sparky decided to take a chance anyway. For about $17-18, one way, that covers the fare AND the fare for the bike, which is the senior rate. The train station (Wells Transportation Center) is about 7 miles from the RV park. There were no ticket agents on duty, but there were senior volunteers who help you with the ticket kiosk if you need it. So off Sparky went.....And what a ride it was! It was on time one way and about 15 minutes late the other way. The conductor said that the average speed depends upon the condition of the tracks and repairs. Average speed this trip was around 50 mph. The train is rated for 79 mph. He said if they are cleared for top speed, they go 79!

Sparky was so excited to ride the train! It's been so many years since she has ridden one, she kept looking for seat belts, as the track was rough when the railroad crossings were encountered. There was a cafe car with quite a few things to choose from. Sparky had a cheeseburger. Something about traveling always makes her hungry! (Yep, we gotta have a "snack box" in the truck on travel day, explains Eldo.)

You get on the train with your bike and you most likely will have to remove the front wheel in order for it to be stored upright in a bike rack. On the way there, there were almost no people on the train, so the conductor let Sparky have her bike with her beside her seat in the regular train section where the bike rack was located.

On the way back, the conductor insisted the wheel be taken off. No problem, but Sparky should have practiced it first before taking it off on a moving train! The conductor placed the bike in the rack for safe keeping this time.

The train ride passes through beautiful heavily forested areas in Maine. Don't try to watch the scenery or you might get sick. (Ask her how she knows, laughs Eldo.) No, she didn't get sick, but she almost did until she stopped looking out the window. There was a train yard along the way...Of course Sparky had to get some more train graffiti.... 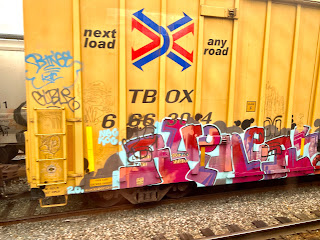 Rich met Sparky at the other end, stashed Sparky's bike in the back of his Tesla, and off we went! 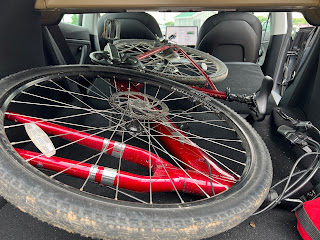 It was a great, fast paced weekend. The very next day, we went on a 25.7 mile bike ride through very hilly and beautiful areas surrounding his town. We passed through a wildlife refuge area/nature preserve..... 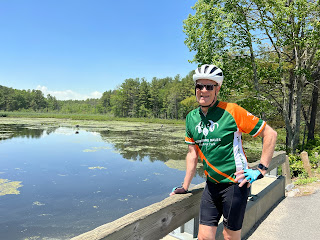 We rode the Bruce Freeman Rails to Trails for a few miles. It was a welcome relief from all those hills around Concord! Very level and a wide trail which passes by numerous ponds/lakes. At one point Rich stopped to rescue a turtle in the middle of the road which was about to get hit by a car. Yay, Rich! Tommy or Tina Turtle thanks you! 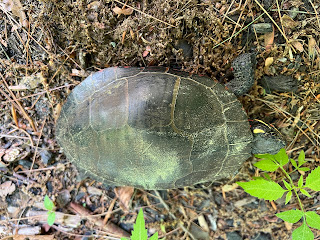 After almost completing the trip, Sparky asked if there were any "perks" along the trail, you know, like a sandwich shop or ice cream? Rich says, "Well, there is a Dunkin Donuts." HOT DOG! I'M IN! says Sparky. So naturally we stop for a couple of donuts and Sparky's Coke. After we had ridden the trail and got back on the country side hilly roads again, we passed by TWO lemonade stands. And because the little girls were so cute, Sparky and Rich made a purchase each time.  One of the stands had the girls doing cheer routines to get people to stop for a lemonade. Gotta love and support budding entrepreneurship!

That night we had an amazing dinner at Acitron, a really great Mexican restaurant in Arlington, MA. It was fantastic, best guacamole ever! Along a short walk to the restaurant, Sparky saw this memorial tombstone in town. "Near this spot, Samuel Whitmore, then 80 years old, killed 3 British soldiers, April 19, 1776. He was bayonetted, beaten, and left for dead but he recovered and lived to be 98 years of age." !!!! So much history in these New England towns and so little time to explore it. 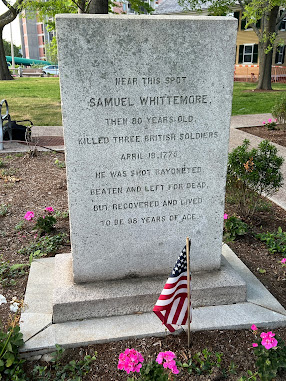 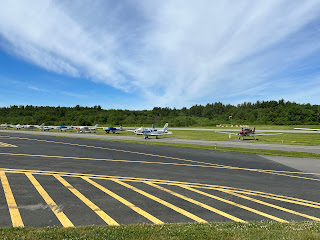 Sunday, it was breakfast out at a cafe at a small aircraft flying field, Nancy's Air Field Cafe in Stow, MA. Watch small aircraft take off and land while you eat breakfast. Fun! Rich use to fly small aircraft so he was very knowledgable and shared how the pilots have to work with the wind direction and steering the rudder pedals in order to get lift to take off. The food was fantastic! (The chef trained in Switzerland!). Then back to the train station, and back "home" to our rig. It was a wonderful weekend. We will see each other again in August, when Sparky and Eldo  take in a Red Sox ball game at Fenway Park with Rich and his wife, Lisa, and take the train in again!

Time to move on once again....Since we can only stay three weeks in a membership park, (this time we chose two in order to get in a visit to another membership park close to Bar Harbor) we are headed to Trenton, Maine where we will be 7.5 miles from one of our favorite destinations, Acadia National Park. We will be here for two weeks. Woo hoo! Biking the carriage roads, here we come! See you down the road...

Posted by Jeannie and Eldy at 8:11 PM