Well, we wrapped up our last few days in Trenton, Maine, with a couple of special notes... 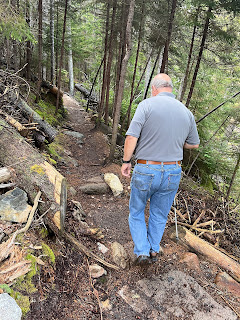 One, Eldo decided to explore a trail with Sparky, and he actually enjoyed it! We were driving around Mount Desert Island after a rain shower today, and found a trail that appeared to be new, over near the Seal Harbor area. It's so new, we think the crowds have not discovered it yet....SH-H-H-H! (Well, the secret is out now, laughs Eldo.) If you are on the south side of Acadia, check out the Asticou Azalea Gardens, Thuya Garden and Little Long Pond Natural Lands...where the Garden Preserve trailhead is located. 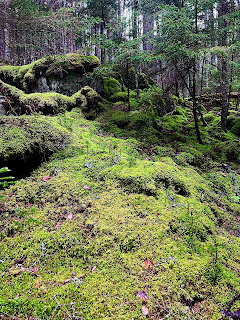 There are TEN trails that intersect and lead into other more difficult trails, at this particular location. Sparky was really excited to find that out.  So here we go...just for a short, beautiful walk into nature to check out the trail today. Eldy has lots of troubles with his knees so we took it easy. It was just nice to have him out on the trail, too! The trail was very different from other trails in the area, at least in the beginning. No big rocks, just tree branches and a spongey, mossy carpet under your feet and there were a couple of cool log bridges. After about a half mile, the trail then got extremely rooty and difficult to walk on. 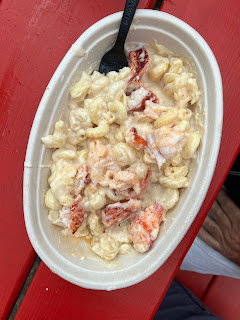 After getting our "forest bathing" done for the day, (that's what the Japanese call walking in the forest), we headed over to the Travelin' Lobster, a small outdoor walkup service restaurant that has a great outdoor vibe, and THE BEST lobster mac 'n' cheese we have ever had in our lives! (Not that we eat lobster mac 'n' cheese much, I think I have only had it twice in my life, explains E.) OMG, it was amazing, that's for sure! But super rich....it was a portion big enough for two as well, so naturally, Sparky had to try a little, even though she is not a lobster fan. She proclaimed it AMAZING!!!! Two happy campers here, to have found a great little restaurant with great food. Over 400+ five star reviews. The cheese quesadilla was terrific! 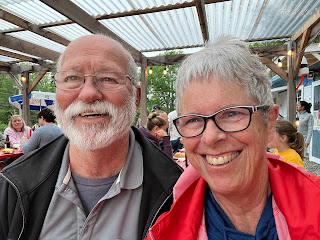 It was so good that we met up with friends we met in Sarasota years ago and ate there again! It was great to see Ann and Wally Stein. 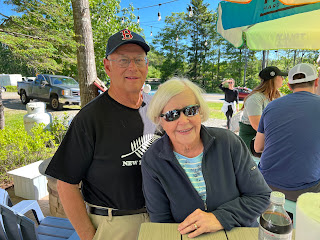 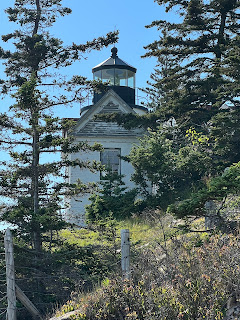 There are so many wonderful things to do in this area. We did not know that there are 27 lighthouses in the downeast area alone where we are, and 70 lighthouses around the coastlines of Maine. So next time, we might do a lighthouse tour or a lobster boat tour! We did visit Bass Harbor Lighthouse. It's not far from the Narrows Too campground, in Southwest Harbor on Mount Desert Island, where Acadia National Park is located. Once you get there, you can walk down to the rocks to get a better view from the side and if you are adventurous enough, walk farther out on the rocks to get a better photo of Bass Harbor Lighthouse in its entirety. There are lots of iconic photos on the internet of this beautiful lighthouse. Here's one that's easy to get from the backside. No walking on rocky cliffs, just walking on terra firma. lol....

Sparky settled for a close in shot on the rocks for today. Sometimes her balance is a little off she has noticed, as she gets older, so she's going to be more careful and pay attention to that when climbing around on rocks, lol. This was one of those days where she felt a little wobbly clambering around.

If you are interested in history, and have your passport, you can take a little trip to Roosevelt Campbell National Park in New Brunswick, Canada. The admission is free, and it's a wonderful place to visit. We went several years ago and loved learning about Franklin Delano Roosevelt's summer home, where he spent his summers for over 56 years. 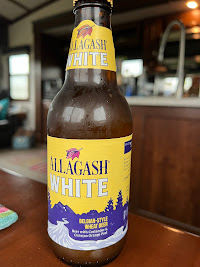 There are lots of wineries and breweries in this area, too. Of course there is a Maine Beer Trail and a Maine Wine Trail which cover the entire state of Maine. But in the Downeast area where we are, (that's roughly the southeast coast counties of Maine all the way up the coastline border to Canada, there are four wineries and seven brewing companies. Eldy has discovered he really likes Allagash White, a lighter Belgian style wheat beer. 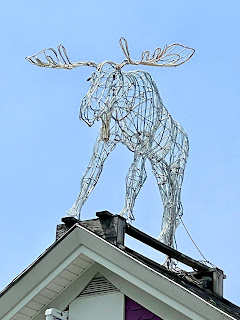 And of course, you have to visit all the cute little touristy shops and ice cream shops in downtown Bar Harbor and take a gander at the iconic moose wired statue at the top of one of the local restaurants, Geddy's. That is, if you can squeeze your vehicle down the narrow streets of the town with hordes of people all with the same idea to shop and eat in quaint Bar Harbor! It is VERY difficult taking the Dodge Ram dually with its big wide fenders into town, so we didn't go there much. The Island Explorer buses don't start running till June 23rd, so that curtailed most of our efforts to get downtown. It's a real possibility you could get your side mirrors on a big truck like that sideswiped and damaged unless you pull them in. We've seen big trucks with smashed mirrors. BUT--There are some great restaurants in Bar Harbor, lots to choose from. Where there's a will, there's a way. So we wish anybody good luck and hope you find decent parking! The harbor view at downtown Agamont Park is beautiful, even on a cloudy day. 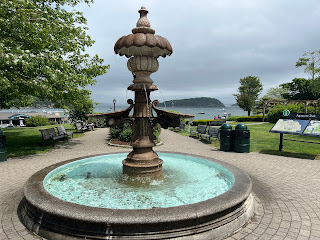 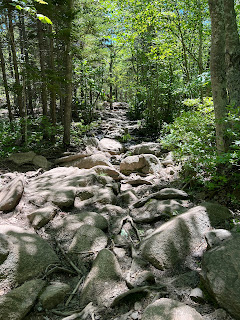 Sparky took one last hike out to Gorham Mountain. It supposedly is one of the nicest hikes for views and Sparky thought so, too! It's not an easy hike for seniors, however. It was rocks and boulders all the way up, and rocks and boulders all the way down, even if you take the back side down to the Sand Beach area and the Ocean Drive Path Trail back to the Gorham parking lots. There were LOTS of people on the trail, even though Sparky started at about 9:30, the Gorham Mountain  parking lot (off the Park Road to Sand Beach) was full, but the overflow parking lot was not. It's not a high mountain at 525 feet, but there's plenty of elevation change going up and down. It's super hard on the knees, as most people say when going down. However, it's a cool, family friendly hike and one of the most popular in the park. On the way up, you get to see the Waldrun Bates memorial pathmaker plaque that was inserted in the rock. He's the guy who helped create many of Acadia's trails and create the type of cairns (rock formations) used to help mark the trails. 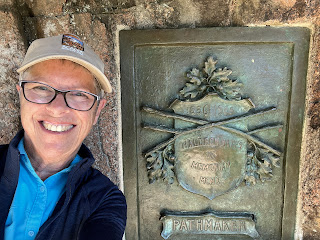 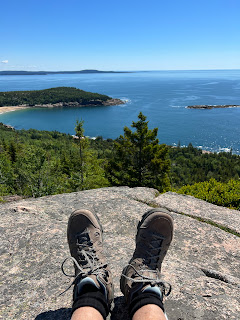 The views are outstanding! Sand Hill Beach is to the east, the Beehive (famous iron rung trail) to the north, and Otter Point to the south. This hike is rated as moderately strenuous and takes 1-2 hours depending on how long you choose to soak up these fabulous views from the summit. 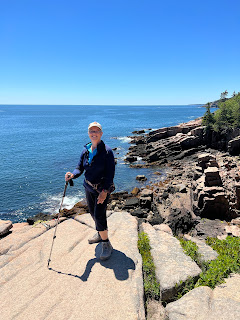 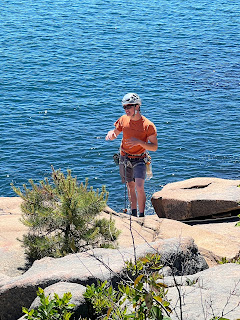 Sparky took the "back side" trail down the mountain as a LOT of people were coming up from the Gorham parking lot trailhead. When she got to the bottom of the trail, it came out near the Sand Beach area. Walk across the park road and pick up the Ocean Path walkway back to your parking lot. Lots of places to go down some stairs from the Ocean Park walkway. You might see some technical climbers coming up the cliff walls from down below! This guy (at left) just surfaced and popped up above the cliff face as Sparky got down to the cliffs.
The views along Ocean Drive walkway are wonderful! For perspective, click on the photo and you can see the little tiny people on the top left cliff. Lots of crazy people going W-A-A-A-Y out to the very cliff edges and dangling their feet over or walking at the edges looking down at the ocean waves crashing at their feet. Brave souls, they are! 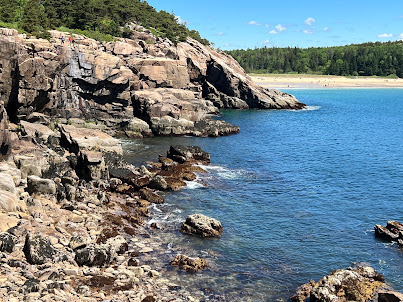 Sparky took one last bike ride, a 20 mile one, along the carriage roads and added a couple more of the cool Rockefeller bridges. This is the Hemlock Bridge built in 1925. It was one of the more expensive bridges to build, as it spans 200 feet. It has a single arch and two faux arches on each of the sides. It's really fun to look for the usual trail that passes underneath or alongside these bridges to get a totally different perspective from down below. Watch your step! Rocky, wet and slippery in the late spring, early summer. 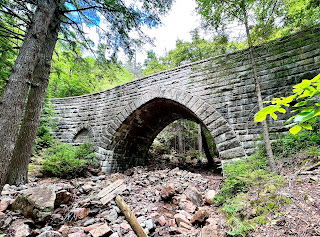 And right after the Hemlock Bridge on the same section of the carriage road is the Waterfall Bridge, a tenth of a mile further. Hemlock Bridge was built in 1925, spanning 120 feet. Right behind it is the 40 tall Hadlock Falls which flows through the arch. The waterfall becomes just a trickle in the summertime. But look at it now! 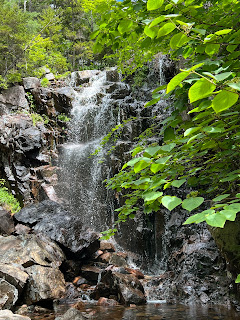 There are four buttress viewing platforms on this bridge. it's so cool! 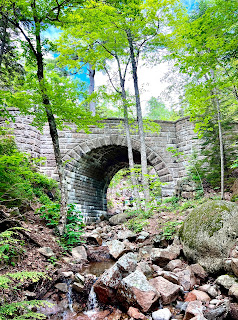 The crowds are coming....the end of June is near, and in the last two weeks, the number of people parking at the different areas along the Park Road is a LOT of people. We can see the crowd control management problems already with hiking trails and parking lots, even with allowing cars to park in the right lane along the one way sections of the park road. We are glad we got here in early June...There is a transit system for all over Acadia, the Island Explorer, which is fabulous, but it doesn't start till June 23rd, just in time to help alleviate some of the traffic congestion---maybe.
Well, our stay has come to an end, we have left Narrows Too and headed back to Wells, Maine, to Moody Beach, where there are crowds there, too! But hey..temperatures in the low seventies during the day, and fifties at night for the next two weeks sounds really great! We'll see you down the road....Thanks for reading....bye for now.....

Posted by Jeannie and Eldy at 7:37 PM