Well-l-l-l-l....Texas sure is an interesting state, and we are not even talking politics, that's for sure! Sparky says it's interesting because we've seen some exotic wildlife ranches in the area and she wondered a little more about them--are they for hunters? Are they refuges? Can you go visit them?.... So here's what she found out.....

First, there's the Hatari Wildlife Park...You can go visit this one. It's a little on the pricey side, (28.00 for one senior) but it sure looks interesting! There are four unique ranges--dunes, lower grasslands, lowlands forest, and the sahel. It's a drive thru tour that minimizes contact between you and the park personnel and the park takes great precautions during this COVID time to safely allow the public to come and visit. There are places where you can get out and walk...In the lowland forest, there's a 3,000 foot boardwalk. In the Sahel range, you can feed a giraffe on an elevated platform! The park is in Weimar, TX which is 21 min. or 18.3 miles from the Thousand Trails Colorado River RV park. There are species there at the park that we have never heard of, (and Sparky was a teacher! laughs Eldo). Here are some of the more exotic ones that you might see at the park: Bongo, Addax, Roan, Eland, Barbary sheep, Nile Lechwe, Scimitar Oryx, Sika, Sitatunga and the Sable. They are only open Thursdays thru Sundays from 9:00-4:00. Sparky thinks she might just have to check this out!

We saw some other exotic wildlife ranches in the area, and some in Texas are for sport hunting. The exotic animal industry is big in Texas. (Isn't EVERYTHING bigger in Texas?) Without going into the ethics of balancing conservation by raising the animals and then hunting them, we'll just say it's a BIG business.

And on to other things...There's not a lot to do in Columbus, TX, but several day trip ideas would be San Antonio and their Riverwalk, (2 hour drive), a trip to Katy (57 min.) for Camping World supplies and necessities and Hobby Lobby and Joann's, haha...(HA! We don't need anything at this point from Camping World OR Hobby Lobby OR Joann's, says E. Sparky has already thought of everything!) But--but--she ALWAYS needs craft supplies.

We like Beckey's Cafe for a very reasonable breakfast (but small portions), Schobel's for a nice breakfast but more expensive, and Los Cabos for decent Mexican food. AND--Nick's Italian Restaurant for very good pizza. Do you like brisket? Peter's BBQ in the next town of Ellinger, TX.

In the meantime, we continue to battle the ASIAN LADY BEETLES. They look JUST LIKE ladybugs but they range in color from red to orange and have varying spot patterns. They eat other ladybugs and they infest some fruits. They are an invasive species. THAT'S THE UNDERSTATEMENT OF THE YEAR. They CAN bite, and they emit a stinky odorous yellow fluid when they are dying, like if you squish them. Ask Sparky how she knows that! 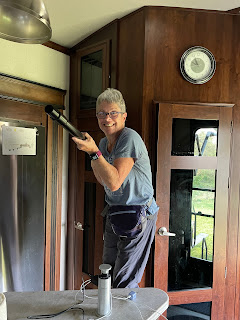 The beetles are currently winning. Apparently, they swarm every year about this time, in November, and they are only going to be a nuisance for a short while, the office says. How long is a short while? Inquiring minds want to know. Probably as long as we are here in the park, three weeks? Sigh.....OK....We have tried or are going to try, 1.) vinegar spray on the screens, (the jury is still out on that one but WE hate the odor, so we're not going to do that. Internet gurus say spray it all over your walls and windows! Uh, nope. 2.) bay leaves--we tried that (not enough smell), 3) vacuuming them up (works great but Sparky is vacuuming several times a day....Enough already!) AND---it will make your vacuum hose stink because when the beetles are stressed, they emit stink and little poopy trails behind so the vacuum hose is probably contaminated by now.  Eldo held out some popcorn for Sparky to suck thru the hose to push those little boogers through the L-O-O-N-N-G hose to the vacuum bag canister in the bay, the logic being the beetles will stick to the popcorn and get pushed through to the very end. Hmmmm...maybe. 4.) Blast 'em with the AC. That has really helped! If it's warmer inside than outside, the beetles want in. If it's colder inside than outside, the little varmints will want out. That's the logic. So far, the AC method is working pretty well. We're freezing, but that's ok. We are down from more than fifty a day to about half that. 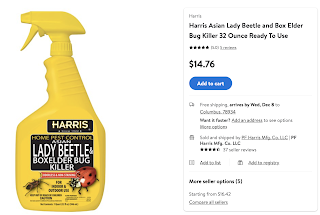 You CAN buy this spray from Amazon and so it will be #5 if we continue to be harassed by them almost flying up our noses in the house or creeping down Sparky's neck.

Sparky is still crafting up a storm and is currently working on a set of three fabric wine bottle carriers to put in her Etsy shop, JeanBeanGifts. 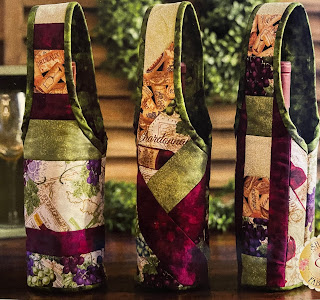 (She really hops around from project to project, explains E. Very short attention span means lots of projects going at once.) Yep, and a cabled headband is in the works, too. And a knitting stitch row counter, and....

So, here we are, still in Columbus, TX for another two weeks, providing the lady beetles don't run us out of town. Nah, they won't. They aren't as bad a big ole stink bugs. Wel-ll-ll-llll....the beetles DO stink! Time for the scented pine candle wax. Isn't this cute? Sparky's daughter gifted us this little Scentsy Christmas camper wax burner last year...Maybe the beetles won't like that scent! One can only hope..... 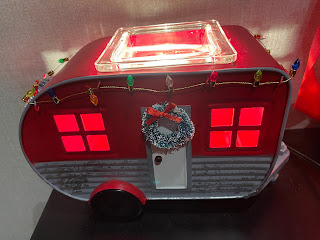 And with that...We will see you on the road....or in town, we're not sure where we will be next. Oh! Eldy says, Sparky forgot we were going to be in Lake Conroe, TX for a nice visit with Sparky's daughter and grandson. How could she forget THAT! She didn't, she just wasn't sure if we were going to make any day trips out of Columbus, TX. Lake Conroe....Where the shopping is terrific, there are restaurants galore, and oh, man....There goes the food budget!

Posted by Jeannie and Eldy at 9:16 PM