A Hop, Skip and a Jump Back to the Midwest...

We left Maine this week and headed towards the midwest...we're going to be in move mode for shorter stays in the area for the next few weeks, mainly because we are not using our membership parks where we are headed because there aren't any!

We had a tough drive from Maine to Timothy Lakes South in E. Stroudsburg, PA. We ran into major construction delays on the way which delayed us over an hour, and we sat in a truck stop behind a car carrier for about 20 minutes before a kind trucker came over and said, "Lady, you're going to be here all night. That pump is not working and the driver is probably asleep in his rig." So we moved over to another lane. When you are a Big Boy, (big fifth wheel RV) you have to get fuel with the big boy truckers. Sparky is always in awe of the big trucks and how agile the drivers make it seem driving them.

But we made it! We stayed at Timothy Lake South for three nights. The mosquitoes and bugs were pretty bad. But the deer were great. We had the same spot as our last stay and there is a deer trail that the deer travel every evening, behind our rig!

Sparky tried to go bike riding, but the McDade Recreational Trail was severely flooded right at the beginning from recent storms so she gave up when the water flooded up to her bike chain! It's not an easy trail, anyway...large loose gravel in many spots, significant ascents and descents. It follows the Delaware River for quite a ways, so it is a pretty trail in many places. Gotta have good tires---hybrid bike or mountain bikes recommended! 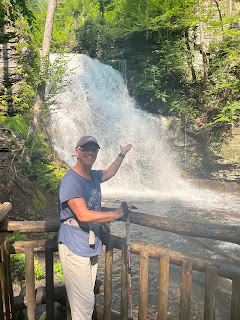 Instead, Sparky went back to Bushkill Falls, a privately owned park with EIGHT waterfalls. It's well worth the 14.00 senior entry fee (17.00 for adults normally) to hike all over the park.

There are several trails there, and the Red Trail is a great hike for cardio...TONS of stairs and lots of boulders, tree roots, and ankle busters if you're not careful. Sparky loves those kinds of trails, they are a true workout! 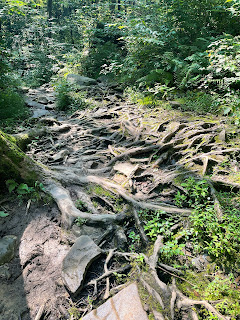 (Sparky is a little weird that way, explains Eldo. Some day she is going to trip, or badly twist her ankle and that will slow her down!) HUMPH! The Red Trail also has some flat terrain, but not much. Sparky had a discussion with some other hikers about how trails are designated--moderate, strenuous, etc. We mutually decided the Red Trail was strenuous. But that label depends on: 1. your age, 2. your agility and 3. your knees, haha. 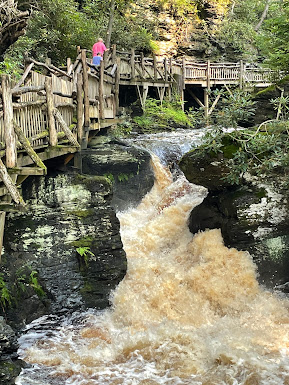 NOTE:  Part of the Red Trail is currently under repairs (8/25/21) so you have to turn back and redo all the stairs after 1.5 miles or pick up another trail. Sparky redid the trail back.
Heart rate up to 146 bpm and dangerously dehydrated as she dumbly thought, "I'll just get water at the end of the hike." Sparky felt a little dizzy at this point. (SPARKY! I have told you to be sure to take water with you! worries E.) So she took her time getting back and once past all the stairs, she felt better. But definitely will have water next time. She didn't like the way she felt. Legs were a little wobbly, too. It was 88 degrees but lots of shade so Sparky thought she'd be ok. Just be forewarned, TAKE WATER! Don't be like Sparky. 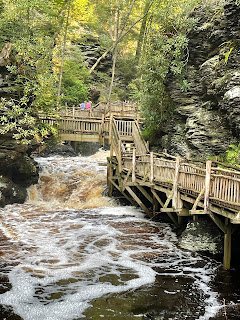 The waterfalls were AMAZING! Pennsylvania had received some severe storms and an abundance of rain from Hurricane Henri, so the volume of water was intense, far more than the last time Sparky hiked the trails at Bushkill Falls.

Canyon walls hug the trails in many spots. They were covered with ferns and little sprigs of wildflowers. So beautiful! The park was fairly empty first thing when they opened at 9:00, but by noon, the parking lot was overflowing. It's a popular place for visitors. You can see why! The water must have a lot of tannins in it that leach from the trees, like up at Tahquamenon Falls in Michigan?

One more cool thing...there is a portion of the Red Trail where people have made a little "park" of cairns--those rock pile towers that mark trails. Usually they are on the ground right where you need to follow a trail in a different direction. A new trend might be starting here?....a little rock cairn in the fork of a tree! 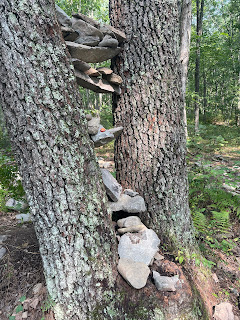 The trail was muddy and wet from the recent rains in a lot of places.

But Sparky soldiered on. Gotta get that exercise in for the day. She made it! It was great! And look at this beautiful leaf just waiting to be noticed....Fall is around the bend, Sparky's favorite season..... 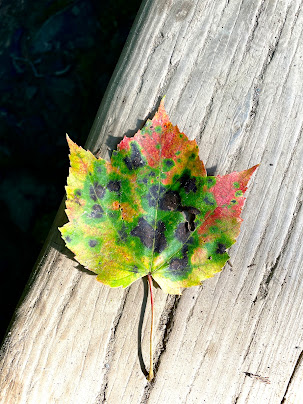 And with that last hike, we prepared to leave the next day for Kenisee Lake, a Thousand Trails park in Ohio, in Ashtabula County, home of many covered bridges. Another long drive, over 377 miles which took us about 7 hours with a fuel stop, and we made it to a great pull through site at this very nice park. The park is in the middle of nowhere, farm country, but the sites are REALLY long and spacious and there are very few bugs and mosquitoes because now we are out in the open! We will be here a little longer than we thought, as we discovered possibly BIG problem underneath our rig...Stay tuned and we will let you know what happened in the next blog. RVing is ALWAYS an adventure with Sparky and Eldo!

Posted by Jeannie and Eldy at 7:56 PM