About time, Sparky! Here we go now....
We have been to Alaska several times, twice on a cruise. This would be our fourth time renting an RV. Eldy plans for months in advance...First he scouts flights--good times for departures and arrivals, and good prices. When he sees something very reasonable, THEN he asks Sparky, think we should go to Alaska one more time before we are too old? Sparky knows at this point, he's got good flight prices and good times to get there. HECK, YEAH! Let's go!
We rented a 25 foot motor home from Great Alaskan Holidays. Their prices are the best, they don't gouge you on adding extras to your price list for the rental. Some companies charge you for dishes and bedding and other things. Great Alaskan Holidays does not. Their prices are the best for what you get, and they have mandatory training videos for newbies and for seasoned travelers. Their rigs have been in excellent condition and the three times we rented from them, we've never had a problem. We felt with the Canadian borders closed, that flying to Anchorage and renting the RV was the most cost effective way to visit Alaska. To drive there yourself is wear and tear on your vehicles, tire replacement probably necessary when you get back, and other worrisome things happening to your rig, like maybe a busted windshield. We opted for additional insurance to cover any windshield/rock incidents. (Bad sections of Alaskan highway are a given that are in repair mode as you travel while in Alaska in an RV.) We got the 25 foot Winnebago, the Winnie Minnie. What was even sweeter this time, was Sparky's very best friend of over 40 years, Jeannie Garrett, expressed an interest in caravanning with us to Alaska, so we enthusiastically booked our flights together and our rentals and off we went May 25th.
Day 1---We flew out of South Bend, IN airport, leaving at the wee pre-dawn hours, having spent the night in the hotel near the airport. As we left the hotel, we could hear opera music playing outside the hotel. Sparky asked the hotel shuttle driver where that was coming from? She said the local 7-11 next door plays opera music 24 hours a day to keep the loiterers away. They hate it!
We landed in Anchorage in the afternoon....We waited for Jeannie to arrive, she came in on a very delayed flight plan so we left the next morning. Great Alaskan Holidays allows you to stay in the parking lot for the night if flight plans are messed up and it's too late to depart the day you pick up your rig. After reviewing the weather for both northern and southern routes on our rough itinerary, we decided to head north. It was going to be colder  in Denali (about 20 degrees) than the southern parts of our route later in the week! We drove to Denali State Park while the temperatures were good and got to see Denali totally unobscured by clouds. It was a beautiful sight! Here, another tourist takes in the amazing view..... 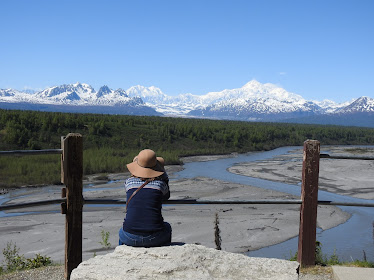 We stayed at K'esugi Ken Campground in Trapper Creek, Alaska that night. This is a beautiful campground that is relatively newer than most campgrounds. The sites are big and spacious and easy to get into. Sparky took a lone hike on one of the trails, then decided to turn back after seeing a lot of bear signs, like fresh scat and berry bushes blooming.. She also saw fresh moose poop on the trail! Oh, boy! (Sparky gets excited about some weird stuff, sighs E.) This is moose poop, in case you wanted to know...(Uh, no, they don't, silly woman! laughs Eldo). 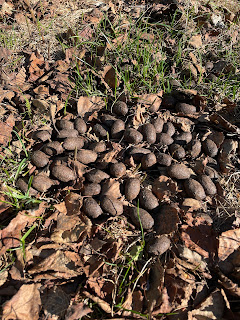 There is a beautiful visitor's center at the campground with beautiful artwork. 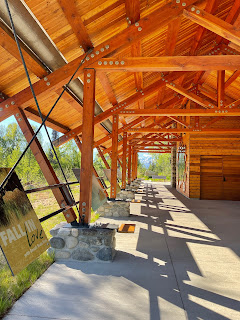 Day 2 --We spent the morning planning an itinerary. We weren't sure how far Jeannie could drive her RV, never having RV'd before, and we didn't know how soon she would tire of driving, so we were going to take our time and plan our route almost day by day, unless we knew that there was someplace we definitely wanted to make reservations for, like Riley Campground in Denali National Park. We had scored reservations for Riley campground park later in the week during our planning stages pre-trip so we headed south to Palmer on the Glenn Highway. Next stop, Mountain View RV Park where we spent the night, and had good pizza delivered right to our site! 45.00 for the night, not bad for a private campground in Alaska. It was very empty this early in the season. It's truly a beautiful view.... 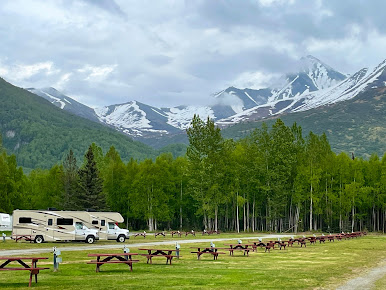 Day 3--driving to Glenallen...We stopped LOTS for scenic views so Jeannie could get photos. She was doing GREAT driving and got the hang of driving a motorhome very quickly. Sparky sat up front with her most of the journey to guide her and remind her of the steps when we would stop and park and how to hook up. 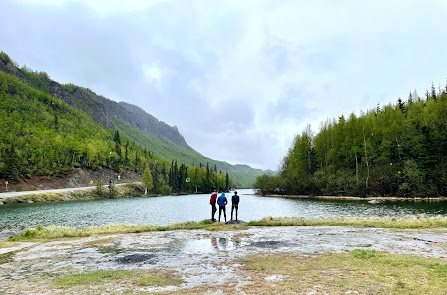 We stopped at yet another spectacular point of one of the river views and we came across three Russians, at least that's what we think they were speaking. Sparky asked to get their photo, as it was cool seeing them in perspective against the mountain/river view. They spoke very good English, and were glad to oblige. They loved Sparky's photo and asked her to air drop it to all three of them, so she did! Sparky got a thumbs up on their way out....We climbed in elevation, and the weather got steadily worse. As we neared Sheep Mountain, at 2750 feet, it started to snow. And then, IT REALLY SNOWED! We were in a blizzard. Jeannie was nervous. Sparky was nervous, Eldo was nervous. But of course, Sparky loving cold weather and winter, we had to stop to get a few snow photos. "LOOK, JEANNIE, IT'S SNOWING!" Eldy called out. 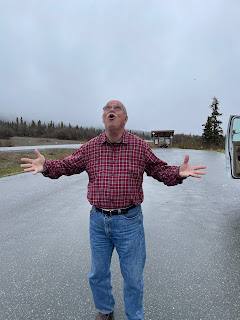 And how! Sparky LOVES snow.... 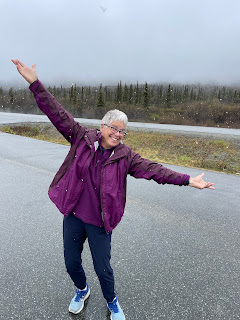 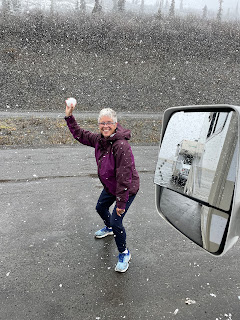 We had some tough driving to get through, with the heavy snow, so back out on the road we went again..... 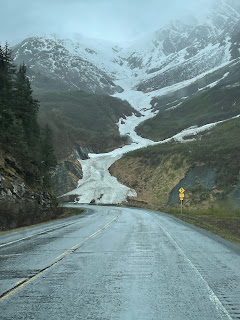 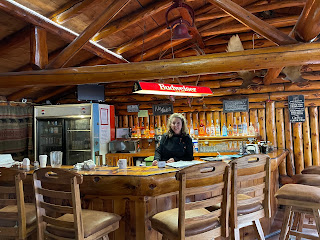 We stopped for the night at a very interesting place called the Ranch House Lodge RV park. The owners are working hard to restore and upgrade the park. It's one of the original roadhouses on the Alaskan Highway, and boy, did the owner have stories for us that she told over homemade  chili, served with any number of hot sauces you could possibly imagine! we laughed so hard at some of the names, and Sparky had a dickens of a time trying not to mess up the pronunciation of the last sauce on the right. You KNOW what she kept mispronouncing, right? Haha. 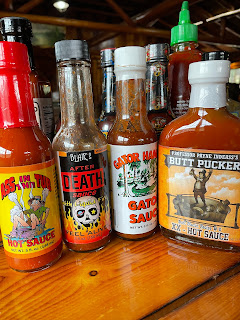 The roadhouse walls are original and the chinking between the logs is old army mattress stuffing for filler. That chili was a welcome meal from the cold that now enveloped the area.  Sparky bought the book the owner wrote detailing the history of the roadhouse. It was fascinating! They reused and recycled
everything! Proceeds from the book are poured right back into upgrading the park. Tomorrow we drive to Valdez. Stay tuned for Part 2 of the Great Alaskan Holiday trip....Bye for now!
Posted by Jeannie and Eldy at 5:51 PM