Wow! Every January thru May, the Venice Rookery hosts a multitude of egrets, great blue herons, anhingas, glossy ibis, an occasional gator or two for nesting season. (Months are approximate)....We love going down there from Bradenton in the early morning or late afternoon. It's about a 40 minute drive from our house and well worth it....

Depending upon what month you go determines the showy displays of the mating egrets and herons. Last year we went in April and Sparky got TONS of BIG, beautiful plume feather displays. This year we went a little earlier and the birds seem to have already settled down somewhat into their nests with their mates. We think they still will be doing courtship dances a little while longer.

It's a simple little place, a little park off of 41 down in Venice. Here are the directions from Bradenton or Sarasota: head 75 South to the Jacaranda Boulevard exit--stay on Jacaranda all the way to 41. Turn right on 41, go about half a block and turn left right by the state police building--there's a small brown sign that says "Venice Rookery" close to the turn.

You see everyone sporting all kinds of cameras from their little iPhones trying to take photos, to the big humongous lenses that the more experienced photographers have. Personally, Sparky has been VERY happy with just a Canon point and shoot 50X lens camera called the SX530. Here are some shots from last year with that camera. 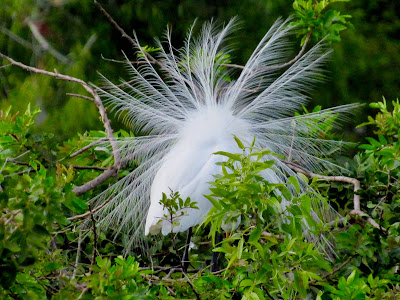 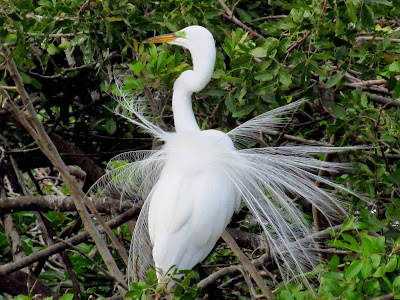 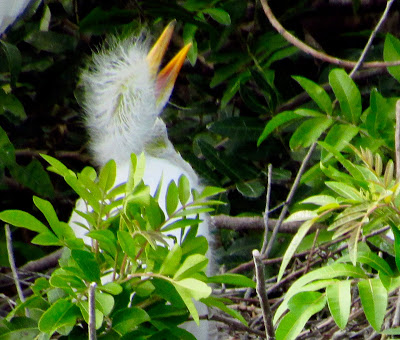 Here are some photos from a trip to the rookery last Sunday....These photos are with a Nikon P900 which has an 85X zoom!  This camera is MUCH heavier, but wow! What a zoom! 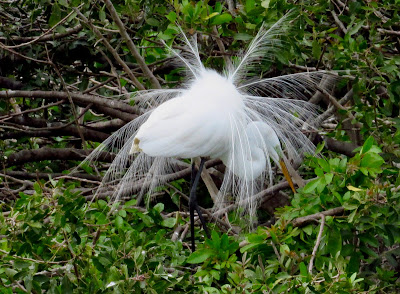 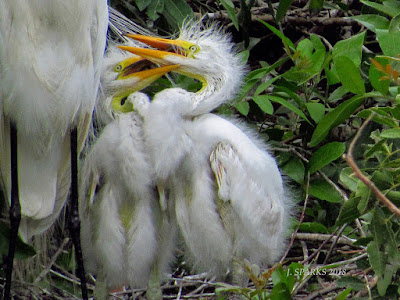 Sparky watched a great blue heron ferry twigs and branches from one side of the pond to the other. It was beautiful to watch the collaborative efforts of the herons to build their nest. 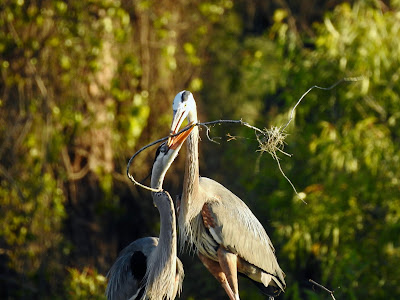 At one point, it looked like the one ferrying all the twigs and branches got tired.....Doesn't he look like he's saying, "Why me, Lord?" 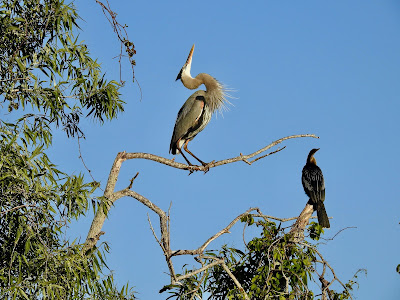 And here's a little weirdness...these cormorants at each other's throats! Either they were having a little battle about something, or one was feeding the other, (but we never saw any food exchanged). One stuck his head completely down the other's throat! 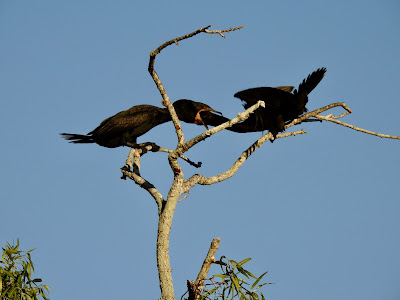 If you ever get a chance to visit the rookery during the winter months down in Venice, FL, you should go see the beautiful displays of mating plumage and hear the noise the young ones put forth as they are waiting to be fed. It's just a little island in the middle of the park, but there are TONS of birds and babies to be seen. Sparky thinks the young great blue herons look like little Groucho Marx. With all the little chicks fussing and hollering to be fed, it's quite the ruckus! Sparky's favorite photo of the day? This one below, where the young great blue heron photobombed the nest building. 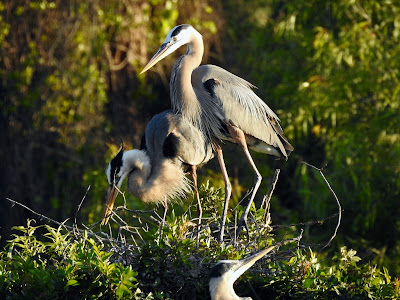 Have a great day!
Posted by Jeannie and Eldy at 7:05 PM