We decided to leave Denali a day early...We had had a complete exploration of the park, had toured the visitor center, and were anxious to see more of Alaska.
We were on a tight schedule, trying to cram as much stuff as we could in about 8 days, so we decided to move on....Pulling out of the campground, we saw the moose calves the campground host had been talking about the day before. Sparky yelled, "STOP THE RIG, ELDY, THERE ARE THE TWINS!" And Eldo, sweetheart that he is, pulls off the side of the road in the 28 foot rig, with traffic coming both ways, and lets Sparky get a photo. Sparky was so excited about seeing the twin moose calves, that she didn't think about the MAMA. You KNOW that mama had to have been close by. She all of a sudden thought about that, so only took ONE photo of the twins. Do you know how hard that was for her to pull herself away from taking any more????? (Very, very hard, nods Eldo. She's crazy about moose, you know.) 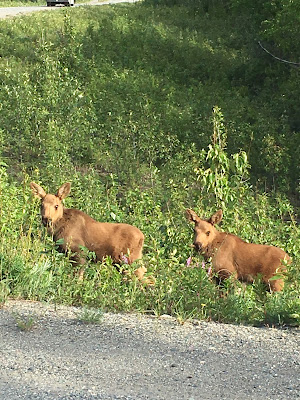 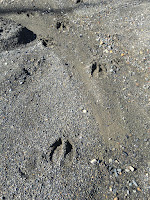 Before we left Denali, we had to dump. This is where we found out that the Coachman Freelander has TWO dump valves. We didn't realize that until we went to dump, and nothing happened. The gauge said we were full. What the heck?! Nothing was coming out. Eldy looked around the coach and underneath and lo, and behold, the second valve was on the opposite side of where you pull the valve. We opened the second valve, and whew! We successfully dumped our black and grey tanks. We did not know there were TWO valves to open the tanks on the Coachman. NOW we were ready to head out. We drove from Denali to Seward, a distance of about 375 miles. It was a fabulous drive, and the roads were great. At about mile marker 221 on the Seward Highway, there was an awesome pullout that was by the mountains, and secluded from the highway by trees. If we ever came back this way, that was one pullout that we would have boondocked at. We'd stop now and then for Sparky to take in the scenery, and we'd see fresh moose tracks!

The scenery was breathtaking.... 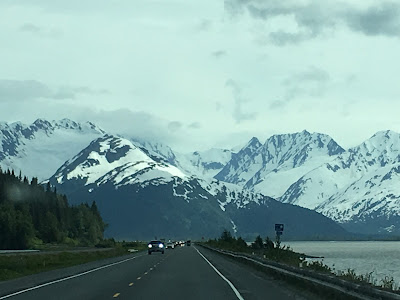 You travel along the Turnagain Arm...one of the most beautiful stretches of highway in America, according to some...Chugach State Park is on the left side of your drive with 3,000 foot mountains constantly within view. The flats of Turnagain Arm are on the right...

And if you time it right, you might see a Bore Tide...A bore tide is one of nature's most unique and unusual tides. It frequency of occurrence depends on a full or new moon and a big differential of about 27 feet between high and low tides. It's a tide from 6-10 feet high of succeeding waves that washes down the Turnagain Arm. It's so high because the water rushes into the narrow inlet there at the Arm. It's one of the biggest tides in the world! It moves quickly, 10-15 miles an hour, and because the inlet is so filled with silt and muck from the glacier river flow, the area becomes very dangerous for anyone who happens to be out on the gravel bars in the arm during low tide. Harbor seals often ride the tide into the arm, and beluga whales come a little later after the water gets deeper.

There were lots and lots of big pullouts along the way. We think anybody who wants to boondock and doesn't mind a little road noise, would have no trouble finding places to spend the night. We decided to stay at an RV park, Waterfront Park, which is on Resurrection Bay in the town of Seward. Waterfront Park is divided into several sections for RVers and tent campers. You can check the link for more descriptions and info, if you don't mind! We didn't need reservations at Waterfront Park in early June, but you might in July or August. They have full hookups for 40.00 but are limited on the full hookup sites. We had water and electric (no sewer) for 40.00 bucks a night. We stayed there for two nights. It's basically a gravel parking lot, and in early June, the winds come in off the bay and it's quite chilly! Here are the temps for the some of the days we were there, from June 9-15th...Sparky just loved it.... :-) Eldo, not so much....The weather was damp and rainy, OFTEN! 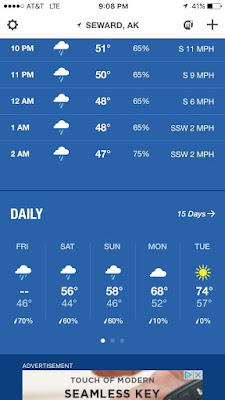 You can walk to town easily in about 10 minutes. There is a boardwalk that runs all along the bay in front of the RV sites leading to the waterfront and marina of Seward. There are several groupings of campsites along Resurrection Bay. In our particular section that we stayed, some sites are in the back of the parking lot towards the street, there is a middle row section and a front row section at the front of the bay. Our campground was called Resurrection North. For you crafty ladies, there's a great fabric store in town, AND a great knit shop! (Yes, Sparky supported the local economy while she was here, laughs E.)

While we were there, there was a big halibut fishing tournament going on for the weekend...Lots of tourists hired ship captains to take them out and go fishing and some really BIG halibut were caught! 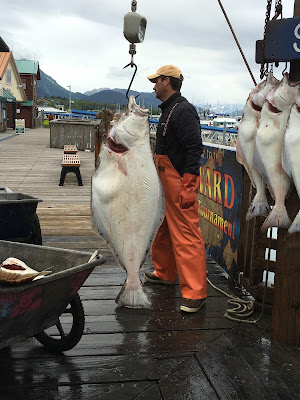 Sparky loved going down to the docks and watching the day's catch put up for weighing and display..."It's all in the details," said one captain. He's got the black rockfish interspersed with the halibut. Very neatly arranged. 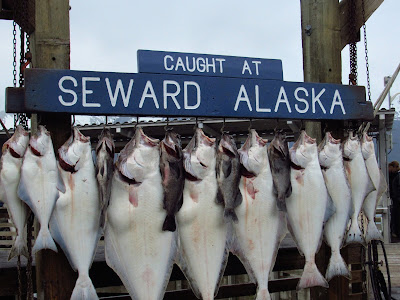 Sparky watched the fishermen fillet all kinds of fish...It's hard work some times! One halibut took two men to flip it over! These orange fish below are yellow eyed rockfish. 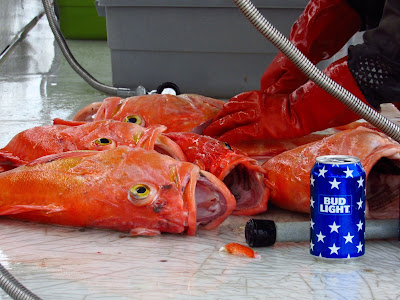 She learned that the orange ones are called yellow eye rockfish. This one was pregnant! 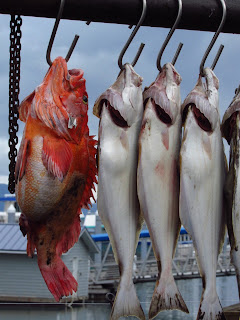 There were some good places to eat in Seward! Zudy's Cafe for breakfast, right at the waterfront, next to the Sea Life Museum.....Great for breakfast...The Railway Cantina--great Mexican food...Thorns' Showcase Lounge--great chili, sandwiches and cool atmosphere.... We decided the next thing we were going to do was go on the hike to Exit Glacier...It's a short hike to see a glacier up front and personal..you can't touch it but it's right there and it's just outside Seward within just a few miles...Sparky promises to speed up the blogging for the rest of the Alaskan trip if you come back to read about it.... See you at the glacier....
Posted by Jeannie and Eldy at 8:18 PM