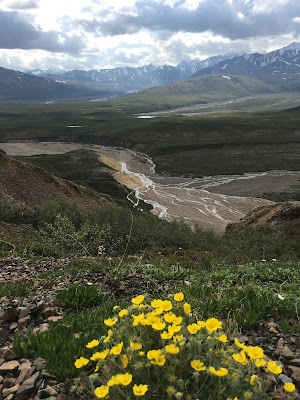 There several ways of seeing Denali National Park. The main road and the only road through the park is 92 miles long, the George Parks road, or just call it the Parks Road. It parallels the Alaskan Range and it is an amazing journey. During the summer, private vehicles can travel only the first 15 miles of the road to Savage River, and there are several pullouts for you to stop and take pictures. Beyond mile marker 15 at Savage River, you can take a bus, ride a bike, or go on foot, according to the Denali park web site. That is dependent upon what nature is doing in the park on any given day. If there is a caribou kill, or grizzly bear activity, there will be closures anywhere throughout the park that are posted on the Denali National Park website. Back to the road and traveling on the park road. You can see some wildlife usually, in those first 15 miles, but if you REALLY want to see some wildlife, it's a great idea to take a bus trip deeper into the park, which is what we did. Taking a bus trip is a great way and an environmentally friendly one, to see yet more of the park, and there are plenty of stops along the way for you to take photos and see things and use the bathrooms.

You can take a shuttle bus (not narrated) or you can take a tour bus which has a park naturalist on board who drives the bus and gives you lots of narration. Tour buses are tan, shuttle buses are green. We recommend taking cold weather gear and rain gear if you are there early in June, which we were there the first week. It started out cold (in the thirties when we left very early in the morning on the shuttle) and periodically it rained throughout the day. (it rains often in Alaska!)Here is a link to the different types of tours and shuttles. https://www.nps.gov/dena/planyourvisit/visiting-denali.htm
The shuttles are cheaper, make lots of stops just as the tour buses do, and in our case, we had a driver who did narrate and give us lots of terrific information. She was amazing! If you can be on the bus with Darlene Huss, you have a fantastic driver! We chose the take the shuttle bus to Wonder Lake, a glacial lake, four miles long and 280 feet deep, this is the next to the farthest bus trip into the park. In hindsight, we would not have gone as far as this as it was a 12 hour bus ride all day for 46.00 a person. The bus looks like an old school bus but has been outfitted with very comfortable seats. BUT--you could get off the bus at any of the stops, stay awhile, and pick up another bus if you wanted to to come back sooner. The number of hours was NOT a problem, there were plenty of stops, but at the end where Wonder Lake was, there was nothing there but TONS of mosquitoes, and BAD ones...no wildlife to see. No eagles fishing, because Wonder Lake was glacially fed and full of silt, and no fish were in it. No fish, no eagles. No moose, no critters. And by the way, you won't see very many eagles in Denali. Most of the rivers feeding the lakes are heavy with silt. So for the same reason there are no eagles at Wonder Lake, there are VERY few eagles in Denali National Park. However, we saw PLENTY of wildlife along the way, much earlier on in the park. Here is what we did see.....Right out of the parking lot leaving on the shuttle, we saw a mamma moose and two calves. The naturalist told us that moose calves have a 90% mortality rate. :-(  Moose eat 50 POUNDS of willow A DAY in the summer months!  We saw snowshoe hares, caribou on the gravel bars in the river, (there are about 2,000 caribou in the park). A little side note about caribou. Darlene, our driver, shared with us that caribou suffer the indignities of having a botfly infestation. Botfly larvae go into the muzzles of the caribou, then they grow and move into the throat, sometimes interfering with breathing. The caribou 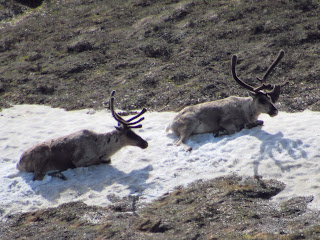 about go crazy from the larva infestation and try to get on patches of ice to get relief from the flies...guess the cold ice helps. In July and August, they can be seen running wildly on the tundra, or shaking their heads violently or stomping their feet, trying to avoid the botfly.

We saw a Wilson's Warbler, a cross fox, which is a sort of hybrid fox with red and black fur, who crossed the road and went right along side of the bus, intent on a mission of some sort. He didn't even stop and look at us, must be used to the buses going along the road all the time. He really blended into the hillside! 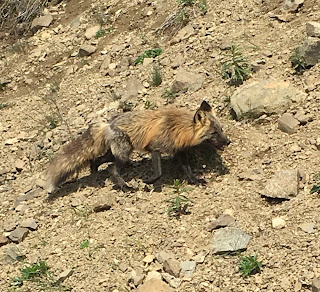 We saw Dall sheep, kind of straggly looking and scrawny. We think they were young ones....It looked like a male in the front with his harem! 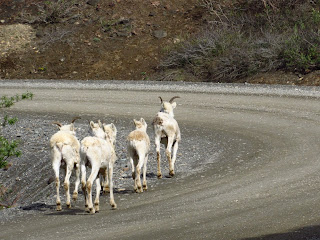 We saw THREE grizzly bears...a mama nursing her cubs....and one having a great old time in the meadow grasses... 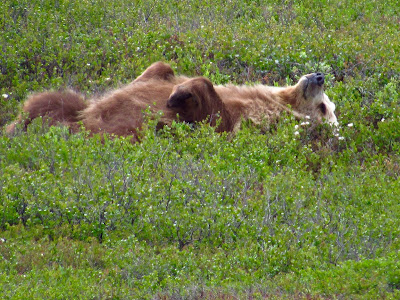 A magnificent creature, even from far away.... 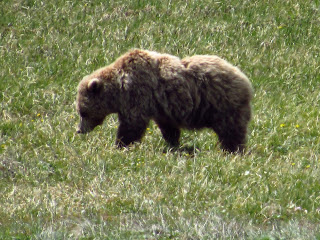 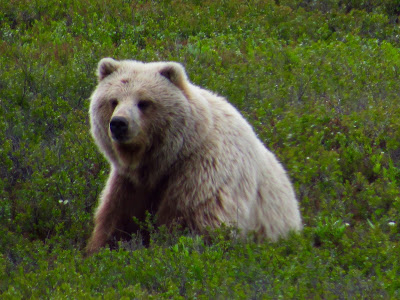 If you get lucky enough, you might get see a beautiful view of Mt. Denali. It's so covered up with clouds on so many days, only about 30% of the people get to see the summit. We did! See the mountains down low. Keep looking up and up, and there's the BIG ONE. Denali. We saw the summit on many of the days we were there. The views were spectacular. This photo just doesn't do it justice, but it shows the difficulty of photographing through and around the clouds coming and going constantly. 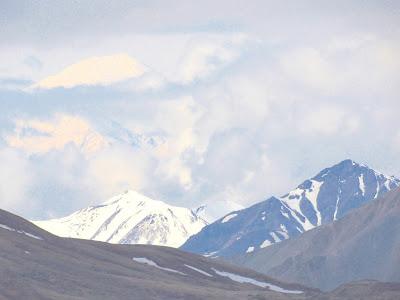 If you get lucky, you might see a wolf in Denali. Only 3-4% of visitors to the park ever see a wolf. We didn't, but we did see a rainbow on our way home from the park today, a beautiful finish to a long but wonderful day! 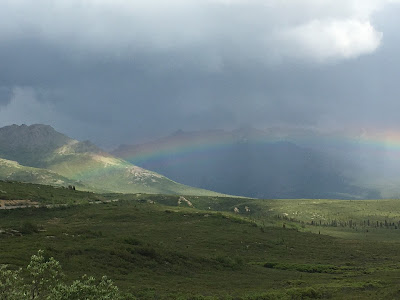 We thought that was the perfect ending, until Sparky saw this on our way out of the visitor center parking lot, as we were getting back into our car and heading out back to our campsite.....People were driving right by him and not even seeing him! He was in the bushes in the middle of the parking lot on a hill! Sparky made Eldo turn around and go back around twice. What a terrific day we had! 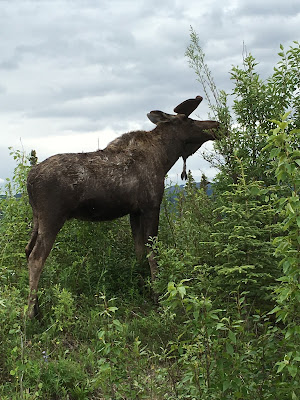 Next on tap, we leave Denali and head to Seward....See you later!

Posted by Jeannie and Eldy at 8:57 PM