So you are thinking about renting an RV to tour Alaska? There are a couple of ways you can do that...You can drive a new unit from Iowa or Elkhart, IN. You are basically delivering the RV from Iowa or Indiana to Alaska and you have two weeks to deliver it. Any time after that, you pay about 100.00 a day, according to one such arrangement. So you are paying the RV company their shipping charges and getting a vacation rental RV out of the deal. You pay for fuel, you pay for insurance, but you get the use of a new rig to go to Alaska, along with any possible snafus that come with driving a new rig long distances. And we heard of such an instance when we picked up our rental. A couple drove a brand new RV from Elkhart, IN to Alaska and on the way, had some major problems with the wall and the slide out coming apart, and a few problems getting someone to fix it on their way. But they were able to overcome that obstacle and enjoyed their trip nonetheless.

We aren't familiar with the arrangements to rent and deliver an RV from the midwest to Alaska, but do know that Winnebago, out of Iowa, is one of the RV companies which you can do that.

Eldy did lots and lots of research on the second way to tour Alaska in a rented RV. That way is to rent directly from an RV rental place in Alaska once you get there. We are not going to name the particular place we finally chose, because of all the legal ramifications that are involved with rating or  discussing our experiences, but think you will be able to figure it out by the time we are done. We chose to fly to Anchorage and rent an RV from there....

Now when you research different rental companies, and there are LOTS of them, there are all kinds of different charges for different things. Eldy investigated FIVE companies. Some companies charge for EVERYTHING in the rental--they charge you for linens, they charge you for kitchen ware, they charge you for a coffeepot, they charge you for extra insurance, some will charge for generator use by the hour, lawn chairs, cleaning charges, etc. Eldy found a company that did not charge extra for any of those things, nor did they charge for extra mileage. The price included UNLIMITED mileage, which was fantastic. Their rate also was half price, 160.00 a day up until June 15th. That included EVERYTHING, except for 11% Alaskan taxes. Good deal! Be sure to ask what models the company is offering. Some say "all new 2016-2017" but you don't know exactly what you are going to get till you get there. We were excited and booked an RV for nine days! Eldy then researched and researched air fares and the best, most economical way to fly.  He found a fare from Orlando to Denver, then Denver to Anchorage, for around 250.00 per person,  then double that for round trip. We thought that was pretty decent. Coming back, we flew Anchorage to Chicago, then Chicago to Orlando. He managed to find a flight to Anchorage that got us there at 2:30 PM Alaskan time so we could get an orientation for the RV and then be on our way....When Eldy researches, he truly researches. He investigated flying out of different airports from different locations, from different times of day, from the same airline round trip, to individual airlines single trip one way fares. Baggage fees? No baggage fees, he explored ALL the angles.

Day I--We arrived at the rental place. We found we were getting a 2015 rig, class C, which was no problem, not a new model that we thought, but it was actually bigger than what we had originally signed for, for no extra charge. It had 15,00 miles on it, so it had been out on the road and we were hoping that the bugs had been worked out it! We told the guy we had been full time RVers, so our orientation was VERY short. He showed us where to find different switches, and we examined the rig for previous damage or wear and tear and documented it with pictures on the phone. The one thing he DIDN'T tell us was that when dumping the black tank, there were TWO valves, one valve where you normally expect it, and one on the OTHER side of the coach that you had to open before dumping. (We found that out when we went to dump the first time on our trip and nothing happened. A few minutes later, when we looked under the rig, wondering why the heck nothing was coming out with the first valve wide open, we discovered a second valve to the dump tank line on the driver's side!)  The rig came with sheets, pillows, plenty of blankets, a small pot and pan and frying pan, a set of silverware for two, some kitchen utensils, a coffee pot, a toaster. It didn't come with soap, or paper towels, or a dish cloth, or anything to wash dishes with, so we had to stock up before heading out on the road.

Back to the paperwork...We had to sign and initial all kinds of warnings...we were responsible for the tires, if something happened to the windshield, we would be responsible for the first 600.00 of the repair or replacement, if we didn't dump the tanks before returning the unit, there was a fine. There were fines if you didn't bring it back gas full, water tank had to be filled, the normal stuff. There were highways that we were NOT allowed to go on, (the rougher, gravel highways) and we were NOT allowed to enter into Canada. There was even a hefty fine for writing and or publishing a review without getting it ok'd first. But we finally were ready to roll!

Before we roll and fill you in on our marvelous trip which is coming in the next few days, day by day, we want to let you know that there are some resources that we found to be invaluable if you are going to RV in Alaska, whether you rent, or take your own RV. The first one is an atlas called Milepost 2016. It's available on Amazon for about 24.00 and you can see it here.... 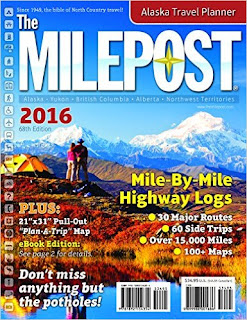 This is a fantastic resource....The main highways in Alaska are marked with mile markers. They are not always accurate as road improvements are going on all the time up there, (frost heave and tough winter damage you know), but for the most part, the mile markers are what you watch for constantly. This atlas covers EVERYTHING you need to know about traveling the Alaskan highways--where the roads are bad, where to find the best chances of seeing wildlife, where gas stations and rest stops are, where the pullouts for viewing and staying overnight are, 30 major routes, 60 side trips, 100+ maps, AND an E-book edition comes with it, also histories of cities, narratives of where to stay, narratives about the areas, the sights to see while you are in the area, they truly cover EVERYTHING!

Sparky sat with this book in her lap most of the trip, calling out cool stuff that was coming up along the highway...where the pullouts were, (and there were TONS of them, many you could stay safely overnight as long as you didn't mind a little road noise) and although we had the e-edition, it was easier to look at and navigate a real book. The only downside to this book is the pages are VERY thin and tear easily. (Ask Sparky how she knows that!)

The second resource we purchased before the trip was this book....Kenai Peninsula Wildlife Viewing Trail Guide, as we knew we were going to be visiting the Kenai Peninsula. It's about 9.00 and was a great little guide. 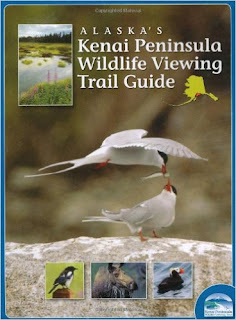 This book has 65 viewing sites located throughout the Kenai Peninsula. They are all of the Kenai Peninsula's major wildlife habitats. Each site has a notable species list, the key to the site icons located on the back flap, land ownership information (almost all are on public lands), field notes which are background information of the geological features, dominant species there, the habitat, helpful hints (like dress in layers for wind and rain), and a section called "getting there"--the specifics for accessing areas, in some cases only accessible by ferry or plane. In addition, some of the sites have viewing tips such as "park back by the ferry terminal and scan the entrance to the harbor. Bring binoculars or a spotting scope to observe off shore activity." There's also a wonderful chart of the 12 months of the year color coded as to when to see wildlife...Example: caribou can be seen grazing in the Kenai Flats in August.

And in the next few days, you will see our itinerary which unfolded day by day. We didn't really have one for this trip till we got there. We knew we had 8 full days to explore, we wanted to go to Denali, and we wanted to see the Kenai Peninsula and we knew we'd be setting off from Anchorage...So off we went.....

Posted by Jeannie and Eldy at 9:48 PM