A Quick Trip to Houston

Sparky's little grandson had a birthday coming up, it was time to go see him! Sparky's daughter, Kerry, was a contestant in the Galveston Island Beach Review Contest, and Sparky was needed for support and grandson control! She was on it!


The Galveston Beach Review is a fun contest where the women dress up in vintage bathing suits and forties and fifties outfits during the weekend event and the contest officially sets off the summer season at Galveston Island. It's an annual tradition.  We arrived at Galveston Island the night before some of the contest events and prepared to check in.

What was weird was, the motel room, booked through Hotwire, was through a third party rental, so the hotel could not give us the key. And the hotel was a homeowner's association hotel, meaning lots of individual owners had individual rental agreements with different agencies on the island, which turned out to be problematic. We had to travel down the street to the rental place which was closed by the time we got there. No problem, they had after hours check in procedures, which Kerry had not been given by hotwire, nor had she been told of this different type of arrangement. We called the first number on the door, it was disconnected. We called the second number and got a voicemail message to call a third number. Mama Sparky called the third number and got a gentleman on vacation out in Vegas, wanting to know how we got his number. He was the owner of the rental agency and we were not supposed to have access to his cell number. Apparently, hotwire screwed up on that one. After numerous attempts to explain our situation, and by now it was getting dark and late, and we were getting grouchy and tired, the guy tells us a code number to use on a bike style lock on an old lockbox which contained our room keys to the motel back down the street. Only the code did not work. We tried for half an hour to get it open. No luck. Kerry tried for 15 minutes. Sparky tried for 20. We pulled and tugged on the lock, we tried reversing the digits, we tried turning the lock the other way around and doing the combo backwards. We reset the lock each time by spinning the tumblers. Again we called, we got the number for the rental agency. She said she would come out and help us. But she lived 30 minutes away...That's okay...we needed help!....Thirty minutes later, she pulls up, walks up the steps, looks at the lock, doesn't even touch it and says, "It's open."  "WHA-A-A-A-T?????"  Somehow, the lock had popped open. She drove all that way only to tell us and show us that indeed, the lock had popped open after 45 minutes of yanking and tugging on it. Sparky was mortified! There was NO WAY THAT LOCK WAS ABLE TO BE OPENED AT ANY POINT IN TIME WHILE WE WERE TRYING TO USE THE COMBO. We apologized profusely to the lady and got signed into our room. (more on that later) We stayed at the Casa Del Mar, a wonderful place and our little condo was beautifully decorated in a nautical theme, although the unit was VERY tiny. The Casa Del Mar people were absolutely wonderful in trying to help us with our problems with the rental agency. They were instrumental in getting us what we needed. The unit was wonderful, but didn't have enough toilet paper. The hotel doesn't furnish it for that particular room as it was a private rental through a third party, and the rental agency was supposed to take care those things. If you do book a place to stay on Galveston Island, be sure you know who controls the booking, who owns the booking. We were never told that the entire hotel was full of individual, homeowners association condo units, and so they were not able to take care of our needs as they arose. But they sure came to the rescue on more than one occasion during the weekend when they didn't have the responsibility of having to do so. We highly recommend the Casa Del Mar right across from the beach on Galveston Island and would book directly through them next time and not Hotwire.

After that snafu, we had a ball...Sparky was only there for three days...so we made the most of it...while Kerry got slammed up for the contest....The meet and greet was first... 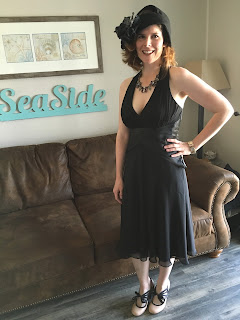 While Kerry met the other contestants, Grandma took Barron to the beach across the street....He loved it! 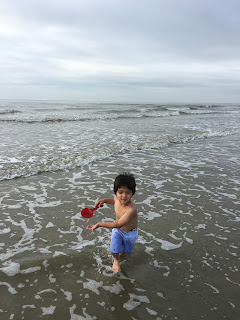 He played and played by himself, imagining the "bad guys" coming in on the waves and jumping over them to avoid them. :-) Grandma made sandcastles with him...He could have stayed there for hours, amusing himself. 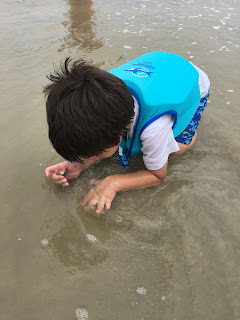 He watched his mom come down the steps to the beach for a group photo, all 40 ladies in the contest were dressed in their vintage bathing suits and pink bathrobes.... 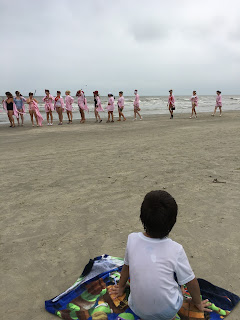 Here's Kerry slammed up in her bathing suit.... 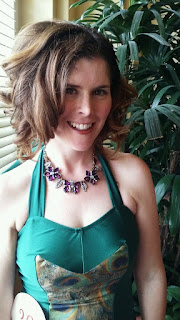 Unfortunately, the weather didn't cooperate much...by the time the actual bathing suit review paraded each contestant thru the stage, the rain started. :-(   But spirits were high, and Kerry had a lot of fun. As each contestant comes thru the stage, they pose different ways in the forties, flirtatious style of batting their eyelashes, twirling an umbrella or other such prop, smile and blow kisses at the audience, kind of like a Betty Boop style pose. The top ten have to answer questions from the judges. Kerry didn't make the top ten, but she really enjoyed the experience!
While Kerry was occupied with the contest and the events, Grandma took Barron to Chick Fil-A at least three times over the weekend, as it was within walking distance of the hotel where the contest was being held. Barron LOVES Chick Fil-A, and since he's a picky eater, that's where we went. Of course, Grandma likes Chick Fil-A too! 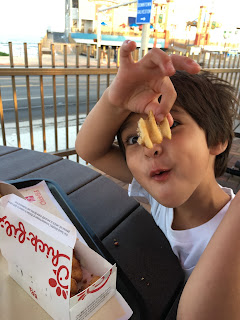 And of course, we spent lots of time together making silly faces at each other, which for some reason, Barron just absolutely cracks up laughing so hard at Grandma's faces... 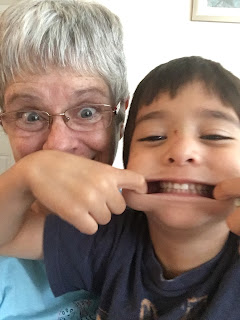 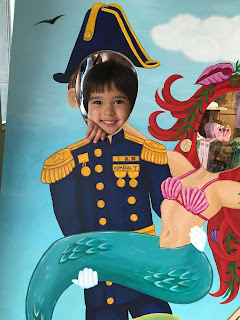 We went to the Strand in Galveston Island, a shopping district of old stores and old streets. The Strand is very dated, the streets are hard to navigate with strollers or wheelchairs, the curbs are high, and they are just not very user friendly for the handicapped or for the elderly. They really need to do something about that. But the shops are great and have some beautiful merchandise. Some are very expensive, some are very touristy, and some are very reasonable. Sparky always finds something she would love to buy, but didn't buy anything while she was there. They also have some great places to eat, but we were conservative while we were there, and ate simply. We will have to explore that option another time, as Sparky LOVES to eat out and try new restaurants! But of course, we had ice cream at one of the cool candy/ice cream shops while we were there!


One of the district's storefronts..... 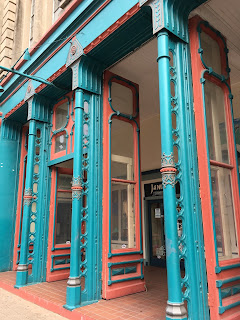 Here's Barron enjoying himself by a water fountain...He's such a cutie! Well behaved and very smart. 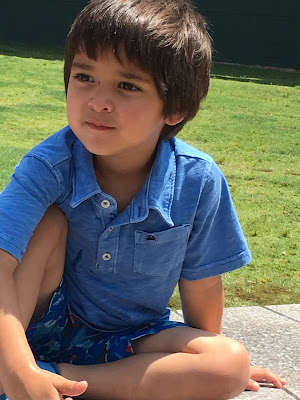 Here's Sparky enjoying a vintage phone booth at the Strand....Reminds me a lot of the phone booth on Dr. Who, only it needs to be blue! 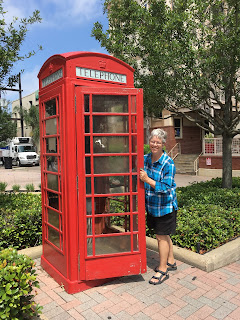 Too soon, the weekend was over....As we went to check out, the rental agency charged us a 50.00 lockout fee. We weren't locked out, we never could get the lock to open and get the key!..Sparky was incensed! She talked to the guy at the desk, and told him the whole story how we couldn't get the lock opened, and then how it popped open just as the lady arrived to assist us, and he says, "Oh, yeah...we had problems with that lock just last night!" AHA! Ammunition...Sparky fought hard to get reimbursed for that charge, and finally, a week after returning home, the charge was reversed. Whew! 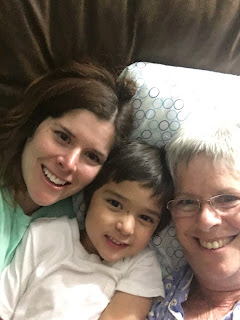 At any rate, it was a lovely weekend and too soon it ended....Kerry had fun...Grandma had fun, and Barron had fun....Time to head back home to Florida and get ready for our Alaska trip coming up within a week and a half! See you later......Bye bye, my favorite little guy.....xoxoxoxox 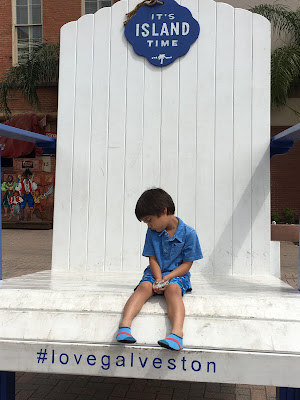