This visitors center at Rocky Mountain National Park deserves a special post all its own along with some important facts about altitude sickness, so here goes....

Our first full day at Rocky Mountain National Park, hereafter referred to as RMNP, was a wonderful day of exploration, culminating at the Alpine Visitors Center, high up in elevation, over 11,500 feet in elevation.

This was a really great center and the "heartbeat" of the park, for the main reason that if you aren't careful, you can really feel the effects of "Acute Mountain Sickness" or high altitude sickness. Going from zero degrees in elevation to over 5,280 feet and higher very suddenly, like taking a flight into a high elevation destination, can cause some people, even very fit ones to have problems, if you overdo it. The owner of our condo told us about his nephew, a VERY fit young man, who came to town for a visit, and thought he was going to jump into the fitness craze of hiking and biking with no problems, and ended up in the hospital emergency room because he got VERY sick. Symptoms are a result of not enough oxygen getting into the lungs at high altitudes and moving from a low altitude to a high one very quickly, usually over 8,000 feet. Symptoms of the condition may range from mild to severe, and do not always occur immediately — in some cases, symptoms may not begin until you have been at a high altitude for more than 24 hours. Here are some common symptoms of altitude sickness and some steps you can take to prevent them: In most people, altitude sickness symptoms are usually mild and include--headaches which begin between 2-12 hours after reaching high altitude, dizziness, breathlessness, nausea and vomiting, disinterest in eating, trouble falling or staying asleep, coughing and persistent fatigue or weakness. Most cases will improve during this time, but it may help if you:

Signs at the park say if you can't catch your breath after resting, experience severe pain of any kind that interferes with your enjoyment of your surroundings, or you are concerned about how you are feeling, to notify the park ranger. Before coming to this altitude, we really didn't know anything about the possible effects of the altitudes. Sparky had a headache since getting on the plane, but it took two full days for the headache to go away, even with medication. She now thinks that probably was a result of the quick altitude change. And by the way, the amount of oxygen is the same at no matter what altitude you are, 21%, but the oxygen molecules are spread out a lot more because of the decrease in air pressure, so you are getting 30-40% less oxygen into your lungs than at sea level. AHA! Something you always wanted to know and couldn't wait to ask. :-)

Back to the trail and the center....The Trail Ridge Road to the top of the park is the highest continuous paved road in North America, reaching 12, 183 feet. Every fall, the road closes for SEVEN months of "hibernation". It is totally "green"--no utility lines, no phone lines, no power except for a diesel generator. A dam below the VC collects snow melt and sewage is hauled away daily. The winters are harsh and long here....Snow can fall any time, even in the summer, which sometimes necessitates closing Trail Ridge Road. It takes 6 weeks to reopen the road, plows have to push through drifts sometimes as tall as 35 FEET. This sign stays up and doesn't come down in the summer! 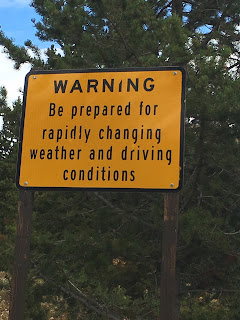 Because the alpine tundra climate is so harsh, the treeline is about 11,400 feet. Above 11,000 feet, there are "banner" trees which are formed from relentless ice winds of up to 150 miles per hour at the mountain tops, so the trees form growth on only one side, making them look like a banner blowing in the wind. The trees cannot grow where the average daily temperature is below 50 degrees at this place in the park. Br-r-r-r-r..... Trees grow so slowly here that a tree trunk which is a few inches in diameter, may be as much as several HUNDRED years old! 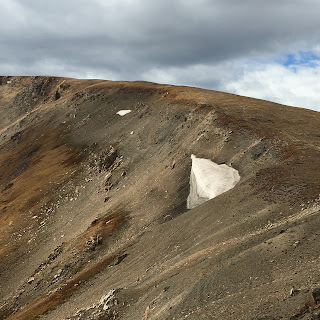 Sparky and Eldo learned a LOT from the visitors center...lots of cool exhibits about the flora and fauna of the alpine tundra...Some were on the animals that survive the bitter cold and have adapted--marmots, ptarmigans--birds that change completely in color from brown to white in the winters, and some exhibits were about the identification of tundra plants and flowers. One of the tundra flowers--a species of grandiflora which is one of the largest blooming flowers up here--2-4", grows leaves, stems and roots for up to 20 years or more. When it finally has enough energy to bloom, it blooms once, sets seeds and dies. It's definitely a harsh environment!
And here is a view near the highest point in the park..... 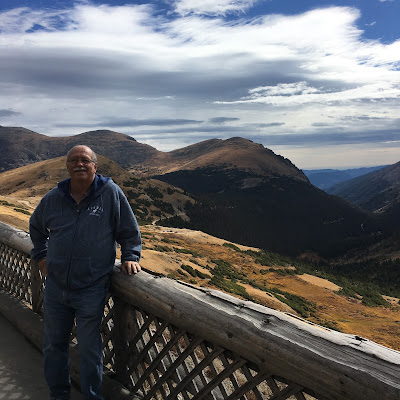 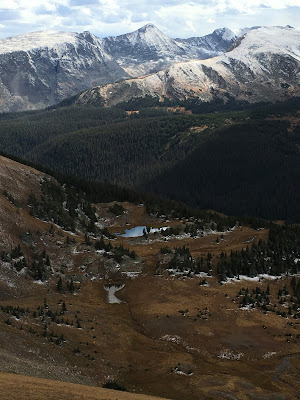 All these photos were taken with the new iPhone 6S, which has a 12 megapixel camera in it now. Pretty darn good, don't you think? Sparky loves it. She tried taking photos with the little Canon point and shoot as well, but the iPhone photos just blew them away.....

The mountains and their majesty were just breathtaking...literally! We have never seen mountains this high, nor experienced RMNP ever before. We definitely plan to come back next summer. But we will ease ourselves into the altitude change a little more gently next time.

To come---tales from Breckenridge, a wonderful little town...Bye for now.... 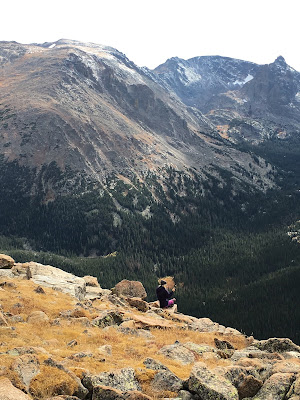 Posted by Jeannie and Eldy at 7:40 PM