A Great Getaway to the Rocky Mountains! The First Day

Sparky has been suffering mightily with the heat and humidity this summer and into fall. So Eldo decided it's time for another road trip! We've been thinking about finding a place that's relatively cool during the hottest Florida summer month--August. Heck, they are all hot! (From April to October!) complains Sparky. Enough! says Eldo. We will research a spot and I think I've got one--How about Colorado? says E. Temperatures are chilly right now, he adds. Chilly???? asks Sparky. Let's go!

Eldy researched and researched and researched. Not only does he scour the internet for a place to stay that's reasonable--the price of a motel room for one night, usually, and a better rate than that for longer stays, he researches for HOURS and HOURS on the best flight, the best car rental option, etc. etc. So we found ourselves heading to the Rockies in Colorado, specifically, Breckenridge, CO, after Eldy worked out a heckuva deal. That man should find deals for a living! Most people would give up after a little bit of searching and settle for the cost. NOT Eldy!

Temperatures were averaging in the high fifties to low sixties during the last week of September, so that's when we went. Sparky got all excited--HIKING! BIKING! Whoopeeeeeeee! (Easy girl, says E. this is high altitude hiking country--9,000-12,000 feet) You have to be careful about altitude adjustment and altitude sickness. More about that later.... 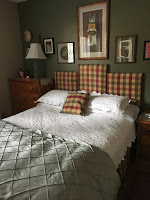 Here's the condo he found--a mile and a half from downtown Breckenridge. There's free bus shuttle service all over town, but Sparky actually walked one way one day after breakfast, UP the hill all the way, 1.5 miles back to the condo. And that's at about 9,000 feet high. The price for four nights' stay was less than the cost of a motel room stay in the area. Two bedrooms, two baths...updated kitchen and just really really nice...even a gas fireplace! We used every night for our main source of heating, rather than use baseboard heat as the temperatures got down into the 30's at night! Sparky slept with the windows open under a heap of blankets with no baseboard heating on.  (Why, I have no idea! wonders E.) Actually, he understands. We like it cold. (But not THAT cold, counters E.) 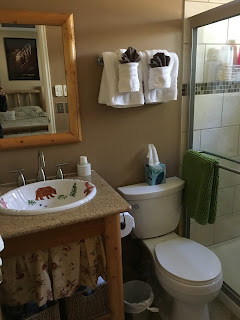 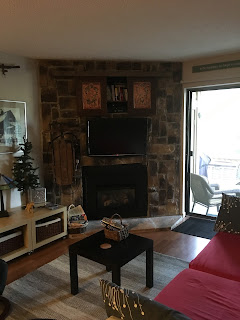 And there was a really nice large deck out back, one of the biggest in the condo section, with a pretty view of pines out back and plenty of distance between this condo building and the next one. A beautiful red fox, who is evidently fed by local residents, comes around in the evenings for handouts. Sparky and Eldo were on the patio, when he showed up, not knowing he was on the tame side. When he started coming for the deck, with no sign of retreat, we headed inside. And there he sat at the door for a few minutes. Cool, but not cool in a way.... 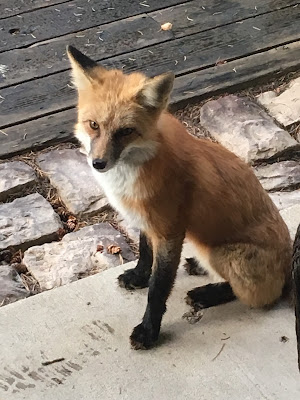 First day: We went exploring to Rocky Mountain National Park on the west entrance, Grand Lake. It was a little over a two hour trip from Breckenridge to the park on highway 40. We had never been to this national park before, so we took our time exploring. We drove all the way to the Alpine Visitor's Center, which is at the highest point of the park, 11,000-12,000 feet depending on where you stand while you are there. Sparky saw a hill she just HAD to climb. (With her, it's like if she sees steps, she has to climb them, explains E. Like lighthouses...she always has to climb the steps if it's open to the public.) Never mind that this hill, the Alpine Ridge trail gains 200 feet in high elevation in a matter of .3 of a mile. That's why people affectionately call it "Huffer Hill". You can hear everybody wheezing and huffing and puffing on their way up. Sparky, no exception. Remember, this was only her second day at this elevation. She had a mild headache as soon as we got here to Breckenridge. But--off she went! Here's the view from part way up the path, looking down...courtesy of Sparky's new iPhone 6S. AMAZING! The photo below is from the SECOND walk of the hike, two days later from the first one. It's the best shot of the trip, Sparky thinks, after they had had snow at the top of the mountains. A bone chilling 38 degrees at this shot and time of day. Sparky saw a young mother, toting a BABY up this hill, with NO HAT and very little protection against the elements other than a baby sling. Sparky was so angry, she almost called the mother out on this, but kept going, as sometimes she can be overbearing and embarrassing with her opinions. The wind chill alone probably made the temperature in the twenties this day. 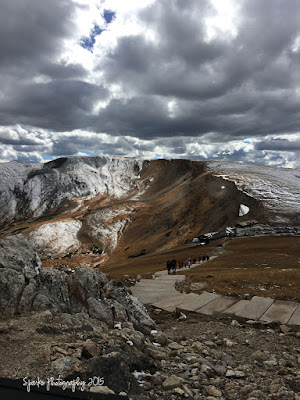 On this trail, which was completely redone in 2010 because of extensive damage to the tundra from tourist traffic, you can see lots of beautiful plants in spring and summer: alpine forget-me-not, alpine clover, rock primrose, moss campion, and many other flowers. And even in September, you can see heart pounding, awesome views of the surrounding mountain ranges, appropriately named the Never Summer Mountains, composed of SEVENTEEN peaks!

Here's Sparky at the sign showing she did accomplish the heart pounding -right out of her chest -walk, with MANY stops along the way. 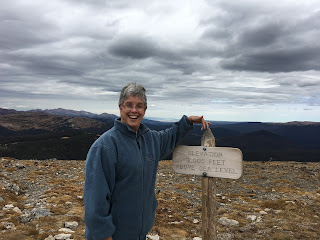 The visitors' center was really nice and very informative. Sparky and Eldo learned a lot about the alpine tundra habitat this high in the mountains. Sparky learned so much she's going to devote a second blog posting about the Alpine Visitors Center.

Tired, we headed back to our home in the sky back in Breckenridge...More to come!

Posted by Jeannie and Eldy at 6:39 PM