Sparky never tires of seeing wildlife and nature...we are so lucky to have beautiful birds who regularly visit the golf course behind our house. Every day we see ibis, plenty of cranes, and an occasional roseate spoonbill flying overhead. We remember making a special trip to the Jasper-Pulaski Wildlife Area in Medaryville, IN when we lived back in Indiana, to see the flock of sandhill cranes who were regularly migrating back and forth from the northern parts of the U.S. down to the southern states twice a year, in the spring and again in the fall. Jasper Pulaski Wildlife Refuge is directly in line with the migration flyway of the Eastern group of sandhill cranes who fly from the northern states to winter in the southern states, Florida being one of the top destinations just like it is for people! We got up extra early one morning, driving a couple of hours from where we were staying in Indiana at the time, to try and see them take off at dawn to feed in other marshy areas. Dawn and dusk are the best times to see them coming in and flying out from the Goose Pasture area. There are tens of thousands of cranes who visit that area each year, peaking around the middle to late November. In one day, if you are lucky, you might see as many as 30,000 at one time! The day we went, we saw maybe a couple hundred or so, and it was kind of disappointing as they were so far away in the meadow, too. 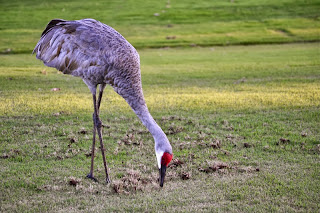 The sandhill cranes that are in our backyard are here all year round because of the nice weather. Granted, we only see pairs, but these on the golf course let you come right up to them and get very close. They just go about their business of eating and tearing up the greens looking for bugs! That area around the crane's feet is in the middle of the greens and he did all that damage. Looks like a golfer who tried a whole bunch of times to hit the ball and missed, and then didn't fix all his divots. Bet the golf maintenance guys have a time with fixing all these birds' divots! 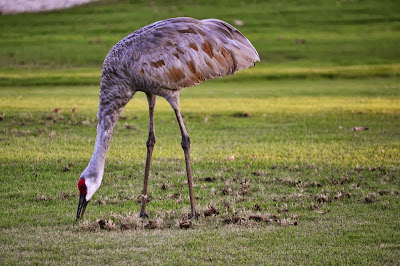 Sparky loves to watch them do their thing and listen to their sounds they make when they talk to each other....It's a very gentle, special sound, almost a cooing rapid clucking sound when they are not threatened and feel comfortable in your presence..... 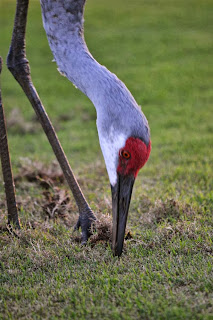 After watching them for awhile, and talking to them..Sparky said, "Hey, guys...why don't you give me a little wing action, please?"  So they did! 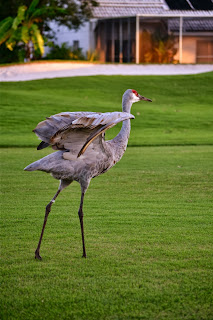 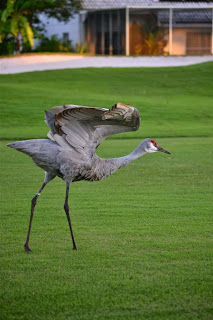 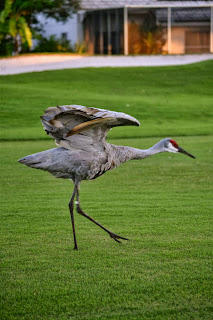 And soon after that, they decided they'd been accommodating enough and it was time to go. But first, gotta check the wind direction for flight path... 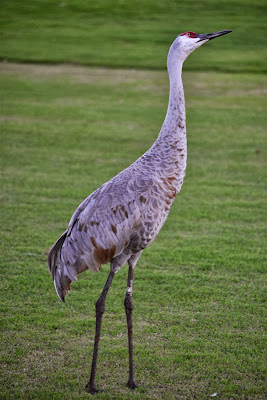 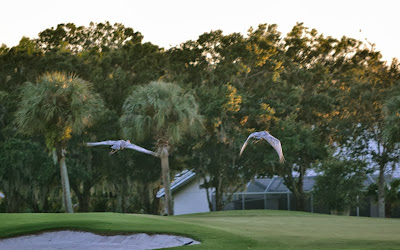 Posted by Jeannie and Eldy at 8:22 PM