If you visit Mesa, Arizona, there is SO MUCH to do here, it's impossible to give you all the lowdown with just a post or two and only staying two weeks. One of the best recommendations we can give you is to drive the scenic Apache Trail, a distance of about 40 miles.

The Apache Indians originally used the trail to navigate through the Superstition Mountains. It became a stagecoach route in the early 1900's, and now runs through the mountains and the Tonto National Forest. The trail/drive starts in Apache Junction and ends at the Theodore Roosevelt Dam. We have never been able to drive all the way through due to road closures and we have tried three times. The most we have been able to drive in one direction, was about 17 miles, having to turn around at Tortilla Flat, a tiny little outpost. At Tortilla Flat today, the road was flooded just beyond the little town, so no driving any further was possible. 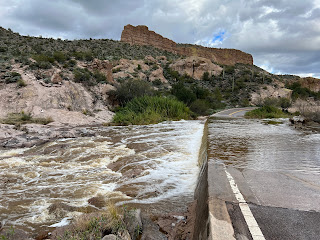 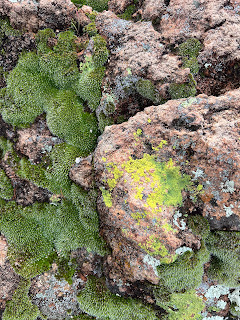 The road is very winding, and there are a lot of steep switchbacks. All the more fun in a big road hogging dually. RV's are NOT recommended past Tortilla Flats and we wouldn't even recommend taking an RV on the steep, narrow, winding mountainous road passages on the way, either. This wasn't the road, (photo below with the tan road) but maybe a ATV trail? Because of a fair amount of rain which is unusual for the area this time of year, the rocks and boulders were covered with beautiful colors of lichens and mosses. The area was a LOT greener and more beautiful than past years on this visit. 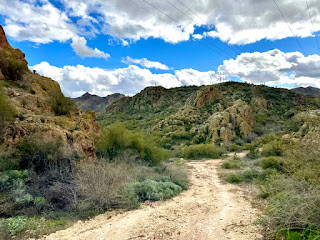 The drive along the way is SPECTACULAR! Here are some sample views.....

There are LOTS of scenic stops along the road, so you could make a day of it or just a few hours of your afternoon. The first stop you might want to see if the Goldfield Ghost Town. It was closed to due Covid last year, but appears to be open now. It looks interesting, but we didn't stop. We thought it might be a little too touristy, but for a reconstructed 1890's ghost town, it does look pretty cool. There is an old gold mine there, Old West scheduled gun fights, a history museum, a gold panning opportunity, and more stuff to do than that. It's free to enter the town, you just pay for some of the attractions.

The second stop is Lost Dutchman State Park. Sparky will blog about that in the next blog. Briefly, it's a 320 acre park, with great wilderness trails and it's popular. Seven dollars entry fee gets you into the park and get ready to hike away!

Third stop---Canyon Lake, one of three man made lakes along the trail. It has a large marina, an RV park and campgrounds. There are red rock cliffs surrounding the lake, making for a beautiful backdrop. supposedly, bighorn sheep and bald eagles make their home here. Keep your eyes peeled for them! You can book a ticket on the Dolly Steamboat to tour the lake if you like. 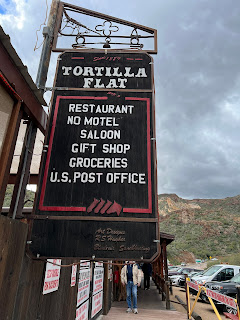 Fourth Stop--You will drive by the Superstition Mountains on the right on your way to a reproduction (?) town by the name of Tortilla Flat, population 6. You pass through a couple of one lane bridges on your way, but they are tall enough for most, at 14 ft. 0 in. And then, you get to town. 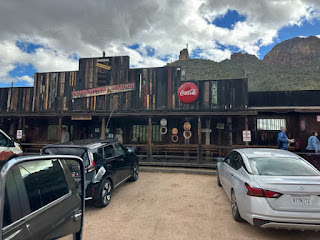 Tortilla Flat is one of the last vestiges of the Old West. When it thrived as a stagecoach stop, it was where travelers and workers stopped on their way to the Roosevelt Dam construction site. the population at that time was about 125 people. It had a little school, a church, a livery stable, a general store and of course, a saloon, the Superstition Saloon. It has since transitioned into a folksy, charming, humorous little place with LOTS of history behind it. It and a couple other little shops and stores have also been rebuilt after fires and floods over the years. The inside of the saloon is decorated with dollar bills, completely covering the ceiling, walls and everywhere there is a space to fit one, several times over. 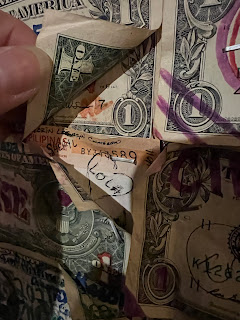 Nobody knows how much money is plastered all over the walls, but it's been a tradition and still continues. If you want to have your moniker on a dollar bill, sign it and ask the wait staff to put it up for you. The tradition started when prospectors (thar's GOLD in them Superstition hills and lost gold mines!) would leave their last buck for a drink.They'd pin up their card and dollar bill behind the bar to reserve a drink after their shift. They'd return, pull down their dollar and buy a round. After awhile, tourists picked up on the idea, the tradition flourished and VOILA! The bills are from all over the world. 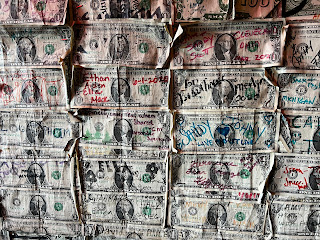 The saloon is famous for its chili, great burgers and fresh home cooked food. They serve prickly pear lemonade there, too, along with prickly pear salsas. (Prickly pear cactus is VERY abundant and a food source for many people in the southwest). We really enjoyed our meal there at the end of our drive. Eldo had a HUGE burger, and Sparky had street tacos that were fantastic! 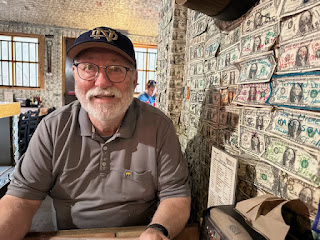 You get a folksy newspaper, Tortilla Flat Telegraph, with lots of local history, comic strip and tongue-in-cheek information with your meal and afterwards, there's a general store and an ice cream shop for some great dessert and treats. And, there is the toilet seat photo op which is to to be missed, but we missed it. And sorry, no photos, darn it. But maybe that's for the best. There are three toilet seats, old wooden ones hanging outside of the saloon. Stick your head through one (EWWWWWWW!)  and get a memorable photo! We passed.....Second option, get someone to take your photo in the bathroom, haha. 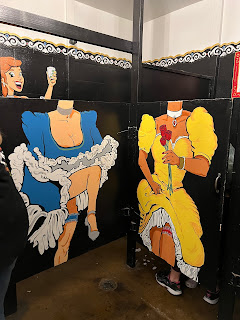 We thoroughly enjoyed our drive today, up through the Superstition Mountains. We will definitely return to check out Lost Dutchman State Park. Stay tuned, Sparky is gonna check out some trails! 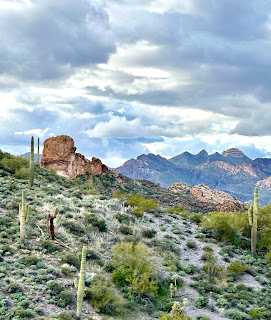 Posted by Jeannie and Eldy at 8:46 PM