1. Regular sized marshmallows
2.M&M minis in red and green holiday colors
3. Twizzlers
4. A tube of black icing
5. Some white frosting (canned is fine, the recipe said
6. Hershey's kisses
7. Pick out a few Reese's Pieces in orange
8. Sterilize a Phillips screwdriver shaft with boiling water. You're gonna poke holes in your marshmallows
9. Candy canes.
OK, here we go.....Break the curved part off the candy cane so you have a straight piece, save the leftovers for eating later. Dip the screwdriver in very hot water and then poke a hole through 3 marshmallows. Stick the candy cane through the three marshmallows but not all the way through the third one (the head). Take your white frosting (Sparky's was buttercream and it was yellow, wrong choice-- and dab it on the marshmallow so you can stick on your red and green M&M's for buttons, and dab a spot on the top of his head to stick on a Hershey's kiss for a hat. Take the black tube icing and dot two eyes. Cut an orange Reese's piece in half and use one half of it for a nose by dabbing some more icing to hold it on the snowman's face. Pull apart your Twizzlers and use single strands to wrap his scarf and tie a knot. Tada! 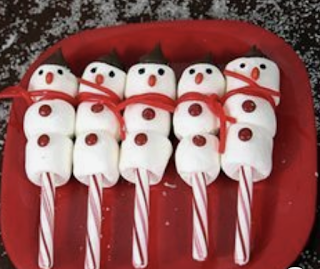 WHOA! Abrupt halt. STOP! Problem #1. After breaking the candy cane curves off, (Sparky should have bought straight candy canes. They do make those, right?) Our hands were very sticky. Then we started working with the marshmallows. They stuck to our hands like crazy.The hot screwdriver worked like a charm, but Sparky had to keep running over to the stove to dip it in the hot water. A screwdriver? Geez, why not a wooden skewer or something a little easier?...Don't ask...Sparky just follows directions. (SHE DOES?????? asks an incredulous Eldo.) Very funny, haha.
OK, we get the HUGE marshmallows skewered. Problem #2. They barely fit onto the candy cane stick. Sparky bought the biggest, most voluminous marshmallows because there were NO middle, regular sized ones, only the minis, and she knew that wouldn't work, but she thought the giant ones would. Nope. The little Hershey's kiss hat looked ridiculous. So then we decided to cut the whopper marshmallows in half. HA! That was ok, they just got a little squished but onward we went. (Did she mention she HATES to cook? asks Eldo.) Well, this is a CRAFT, not cooking, but hey....fun times, right?
Time to add the buttons. Dab a little frosting onto the middle marshmallow and stick an M&M button on it. Problem #3. Ever try to use a table knife to dab just a LITTLE frosting? It just smeared. Sparky was not in her own kitchen doing this, so she didn't think about toothpicks to apply frosting till much later. 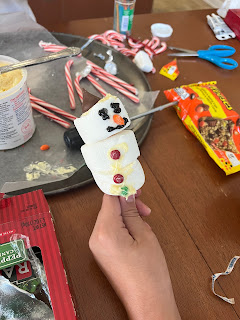 Next, the scarf. Problem #4. Twizzlers are supposed to just pull apart into strings so you can wrap around the marshmallows neck and TIE A KNOT. Sparky thought Twizzlers were Twizzlers. Well, they are not all the same. You have to buy the PULL APART kind, which is the CHERRY kind, not the strawberry kind and although Sparky had strawberry Twizzlers that looked like pull apart ropes, they were not. So she had to sit and cut the Twizzlers lengthwise with a knife which was really slow going. Problem #5. Then we tried to glue the thick ropey piece of Twizzler to the neck, but it promptly fell off. 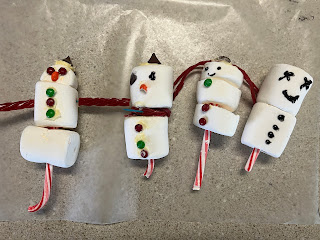 OK, now add the eyes. Problem #6. The icing in the little tube had some kind of reaction to the marshmallow and it immediately became a big, melty blob. It looked like the snowmen had mascara and eyeliner that ran badly and made them look like they had black eyes. Sigh....but grandson was having fun. 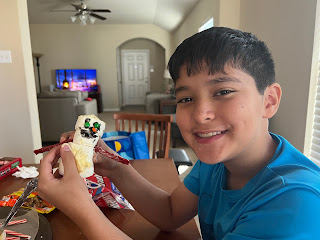 At that point, we abandoned trying to make them look like snowmen and went to town creating something a little different..... 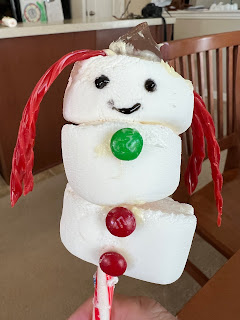 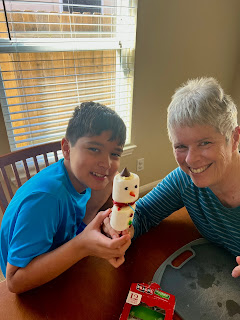 All in all, we had fun. We nibbled candy along the way, Sparky got to enjoy doing something with her grandson, and it was quality time spent together. Daughter said, "Mom, why didn't you make those roll out cookies you used to make instead?" You mean, the spice cookie ones where it takes 4 cups of flour you have to work in the dough till your arms fall off, chill the dough, then roll out to a certain thickness, then cut them out with the cookie cutters and the dough sticks to the cutters unless you remember to flour them, and then you bunch up the scraps and re-roll the dough again?...and then you make the homemade buttercream icing? You mean those? Oh, right...Another time, sweetie.... Grandma got tired today.......But there sure are a lot of cute food crafts out there....maybe Rice Krispie reindeer treats for next time.....???? 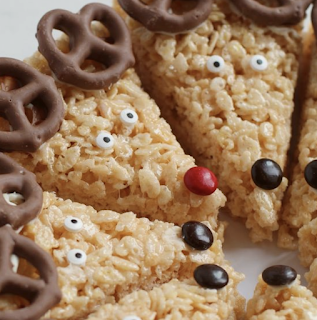