Sparky would love to say that the hitch up leaving Wells, Maine for two days at Trenton at Timberland Acres RV Park was wildly successful and non-eventful, which was 98% true, except for one thing.

We got to our two day stay at Timberland Acres RV park, ready to plug our RV into electric power and Eldo says, "Where's the surge protector?" He usually picks up the hefty surge protector and puts it away after Sparky has detached it from the electrical post and wound the big thick electric cord onto the cord reel inside the rig. In all fairness, sometimes Sparky picks up the surge protector and puts it in the bay. She had laid it on the ground next to the water pump, thinking either he will pick it up or she would pick it up later. He missed it, Sparky got distracted, she missed it, and we left the $400.00+ surge protector BACK at the previous campground. This is bad news, if you care at all about all the electronics in your rig. This day and age, with aging electrical wiring at older campgrounds, you are REALLY taking a chance by just directly plugging your RV electrical cord into the campground electrical outlet post. You can get power surges through the lines, or in our case, just a few days ago, low voltage problems either of which can cause damage to the electronics in the RV possibly or shut down service to the RV. And there's always a possibility that lightning in the area can strike close by and fry things inside your rig through surges or direct hits. It has happened plenty of times to RVers. So in the two times we have been out on the road full timing, we have ALWAYS had a surge protector in place at the campground post hookup.

Two campgrounds ago, our surge protector kept tripping and shutting our electric supply down. It turns out there was a bad breaker at the post. So it's great insurance. Thus, a great concern when we don't have it to plug in. Luckily, Sparky called the campground and they had it and will hold it for us. Whew! Someone could have easily decided to keep it and say nothing. Should we drive back to the campground which was about 300 miles away and go get it right away? Should we wait a whole week til we return to that same campground and retrieve it then? We did neither. We were just too nervous about not having that electrical protection on the line.

Off we went to a nearby town of Holden, Maine to a Jayco dealer and they had a surge protector that was at a much better price, with a multitude of new features AND an app that lets you see the monitoring of the electric lines coming into the rig and how many amps you are using. It also monitors the park electrical supply and will shut off power to your RV if problems are detected.  Here is what we got: 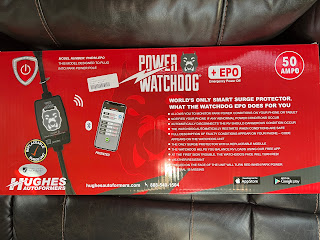 Here is a sample readout on the app: 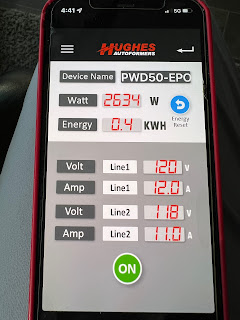 When Eldo makes his coffee in the morning, he can see the amps jump up...that coffee pot uses 12 AMPS. That's BIG electrical usage. (But worth it! claims Eldo.) The coffee pot uses almost as much as a running AC in the rig! You don't have to keep an eye on your amp usage at campground if you have 50 amp service at your site, no problem. Plenty of juice to run things. But-sometimes the circuitry in the RV will trip a circuit breaker if two main appliances are in use at the same time even with 50 amp power supply. If you are on 30 amp service, which we have had to use upon occasion because a 50 amp site was not available, then you really have to be knowledgeable about what appliances use how many amps and what you have running at any given time. They add up fast! Campgrounds will sometimes give you a list sort of like this one, so you don't "blow up" your breakers! (The second set of numbers are the amps for the appliance.) This is just a very short list. 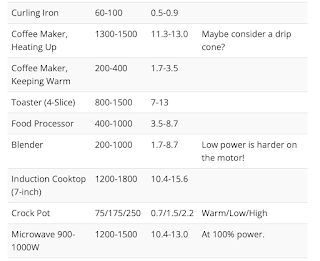 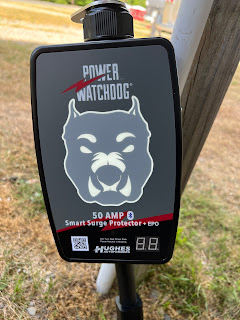 What's cool about this surge protector besides giving Eldo more facts and figures he ever wanted to know about electrical power in the rig, is that it has a white bulldog face on the post if everything is ok. Plug it in, turn the switches on inside the box. White face? A-OK. If it turns red, it then displays codes on the protector box and Eldo can look them up on his app and know exactly what's wrong with the electricity so we can report a specific problem to the campground. One time we had a campground maintenance guy tell us  that our old surge protector was going bad. So Sparky went and tested the surge protector on three other unoccupied sites to prove there was nothing wrong with the surge protector. It's a bad breaker in your campground box, buddy.

AND one more great thing. If lightning ever strikes a surge protector or lightning surges through the power lines and your surge protector at a campground, usually it's toast. You have to buy an entire new one. Big bucks. Not the Power Watchdog protector. It has a circuitry module board inside and you can replace it for about 30-40 dollars.  We are back online with the new surge protector in place. We will save the old one which still works, as a back up. 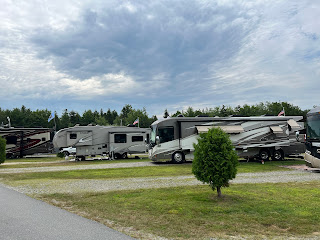 We spent two days at a new-to-us campground near Bar Harbor, because we couldn't get into the Narrows Too Campground or add any more days on the end of our stay at the Narrows (which is a free stay with our campground membership). There are only a very few allotted sites for members so even though the park can seem to be empty, they are not allowed to place a Thousand Trails member in any other site that could be available. So far we have not had a problem getting sites with our booking window of 180 days out, but we have a hard time understanding why, is space is available, that we can't stay longer. Can't fuss too much about that, because by staying in membership parks all summer long up here in Maine, our estimates are we have saved at least $5,000 in camping fees by using our Thousand Trails membership. We will deal with the shortcomings of the program just to be able to be near the ocean and Acadia National Park all summer long. This is Sparky's last chance to ride the carriage roads and hike at Acadia!
We stayed at the Timberland Acres RV Park...It was a reasonable 63.00 a night, for two nights, which is above our budget, but still quite a bargain to be so close to Acadia National Park in the peak summer month of August. Nice campground, nice pull through sites, although the pull throughs are out in the open, with no trees or shade of any kind. It's hot up here right now...high 80's, low 90's...and humid! Ugh...But not as hot as many parts of the lower U.S. They have lots of seasonal people staying at this park, but with over 300 sites, it's bigger than it looks when you pull in and they had room for us. 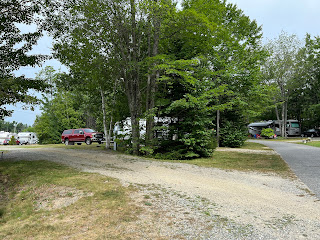 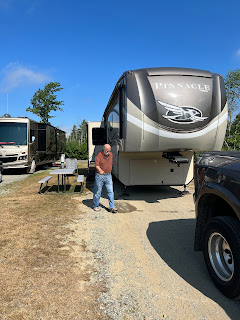 Easy to maneuver around with a big rig. Sites are fairly close together, but so long in length, you can position your RV so it's not right next to your neighbor's window. We are so used to being assigned certain spots, we didn't ask for a different one, but there are nicer ones with more shade there.

And after two days, we headed 6 miles down the road to our last day in the Bar Harbor area at Narrows Too campground in Trenton. By the way, AT&T service on our phones is TERRIBLE! Dropped calls, cutting out badly. T-Mobile mifi is better for internet, but as far as trying to have regular conversations or texts with family on our AT&T phones, it's really problematic at this particular location in Trenton, ME.

As we have said before, you can rent a big kayak at the Narrows Too Campground, but the tidal charts restrict heavily when and what time you can go so you don't end out on the mud flats! Sparky wanted to go today, the 7th, but the next available time for kayak rental due to tide issues was not till Aug. 11th! Weird!

We tried a Lobster Roll (a Maine tourist diet staple!) from the Lunts Lobster Pound today which is right directly across from the campground. It was delicious! Lobster roll offerings are everywhere at local lobster pounds every corner you turn. (A lobster pound is usually a small take out or eat in restaurant that serve all things lobster, clams and seafood. Here's another little one just down the road from the park. We haven't tried this one yet. But yum, lobster rolls are really really good! (And Sparky is NOT a lobster fan, says E.) 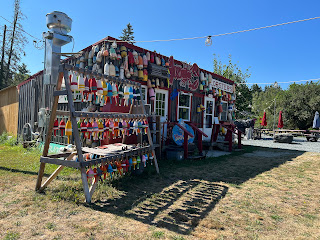 Another day, we ate at a great Mexican restaurant in Ellsworth, that we have found to be very good. Margaritas Mexican Restaurant in downtown Ellsworth, a short drive from the park. We highly recommend that one, too! Cool interior decor.... 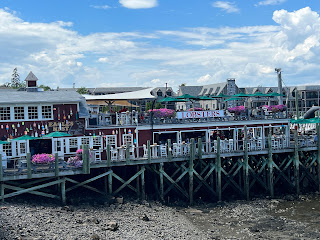 On a particularly hot Sunday, Sparky decided to ride the free Island Explorer bus system, sponsored by L.L. Bean Company. The bus comes regularly to the campground, takes you the Village Green Center in the heart of Bar Harbor a 30 minute ride and from there you can pick up other buses to explore Acadia and Mount Desert Island. Good deal! So Sparky rode the bus into Bar Harbor and spent a couple of hours browsing and checking out the town, then headed back on the Island Explorer to our campground. Bar Harbor has LOTS of fun little tourist shops, and LOTS of ice cream shops, of course. This store's corner display had everything blueberries, even a "Blueberries for Sal" tee shirt. Great children's story, by the way.... 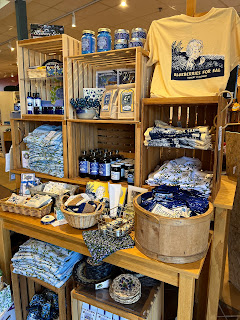 Be prepared for sticker shock on some things, maine-ly food. (Haha, see what she did there?) Sparky got an average sized milkshake, and it was ten bucks! Downtown Bar Harbor has expanded shops at the wharf, adding restaurants, more tourist booking attractions and more lodging. It's really beautiful there. You can even walk out on a sand bar  from the wharf when the tide is out and cross over to an island. It was too hot today to do that, so Sparky didn't. BUT--watch out and be aware of the tides! Nobody is going to tell you when the tide comes in or out, so it's your responsibility to know when. Hmmmm...Sparky thinks it would be FUN to get stranded. But--is that 50.00 or 150.00 on the sign? Guess that makes it less fun....haha. 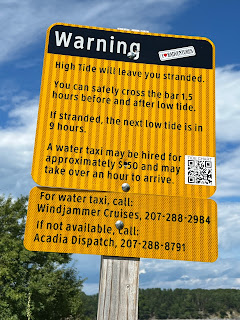 We will be here five days, then head back to Wells Thousand Trails Campground at Moody Beach for three more weeks, then we start heading west towards the midwest at the end of the month. Hope we didn't bore you too much with electrical stuff! But it's all a part of RVing especially as a full timer! See you down the road......

Posted by Jeannie and Eldy at 4:10 PM