We are at T******* RV Resort.....heh, heh, heh..."Mootchdocking" with family in Indiana for a few days...We have water and electric and a super deluxe shower house! With a BATHTUB! AND SUPER HOT WATER! (That's Eldy's son's house), haha.  Sparky has been waiting MONTHS to have a hot, hot tub bath and soak in Epson salts for all her aches and pains, and boy, does the old body feel better getting to take a couple of them a few days in a row. Lots of people are shower people. Sparky is a bonafide true TUBBER and has been all her life. 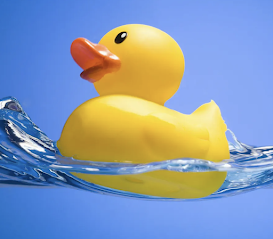 We are in a holding pattern to get to Lippert (the slide component/chassis/other stuff) to get our balky slide fixed. They do have mobile RV tech service for their products, but it's super expensive. So we will have to take the rig in for repairs and wait on it. Hopefully, it will be a one day job so we don't have to find a hotel to spend the night. Sigh....

In the meantime, Sparky is back to doing a little landscaping, and itching to get back on the zero turn lawnmower, but it's been too rainy to help out. Sparky likes using the weed whacker almost as much, so she is doing some of that and pulling weeds for exercise. Eldy's son has woods behind his house and LOTS of birds flying by. A robin is  sitting on a nest in a forsythia bush and flies away some times. Sparky caught the nest while mama bird was out on her rounds and got this photo. 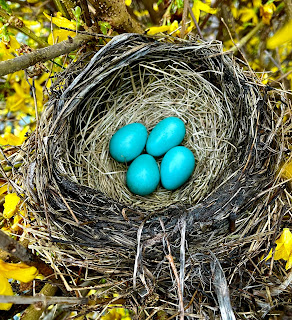 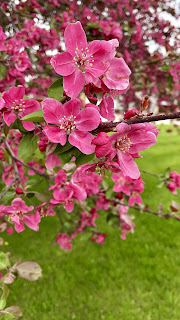 Since she has ridden some of the Pumpkinvine Bike Trail from the OTHER side of Elkhart, and a spur trail or two. A lot of the spur trails are through ample sidewalks but residential and industrial areas, so a totally different experience and not as pretty till you get to Abshire Park in Goshen, heading northeast (Sparky had to ask Eldo for the direction, haha) and get back on the true Pumpkinvine Trail that is forest and farmlands. Lots of beautiful trees blooming in spring in Indiana right now, ornamental pears (the white flowered trees) and flowering quince--the deep reddish pink tree in the photo. GORGEOUS!

If you ride the Pumpkinvine from end to end, it is currently 17 miles one way from Abshire Park, Goshen, to the trailhead in Shipshewanna, downtown off Depot Street. The trail head USED to be in a parking lot just down the street from the elementary school but a little over a mile has been added to take you right to the heart of downtown Shipshewanna. Sparky did the 34 miles from one end to the other couple of days ago, and it was a fantastic ride....perfect temperatures in the high fifties to low sixties, sunny day....and wonderful to see the Amish in their Sunday black and white best, walking together in families, or riding their bikes back home from services. The wildflowers are outstanding this time of year along the trail. Hundreds, maybe thousands of trilliums line the trail, last week there were none to be seen! And if you are lucky, the bison might be out grazing. Bison???? Yep, there is a small herd right outside one of the trailer factories between Goshen and Middlebury. Never would think you would see bison grazing in Amish country in Indiana, would you? 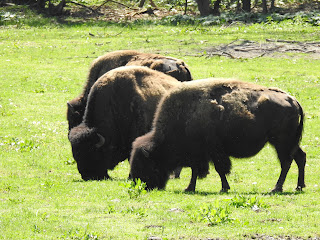 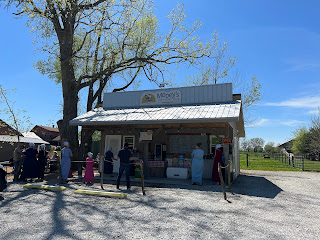 And, if you are riding between Goshen and Middlebury, you can stop off for a delicious ice cream treat at Mooey's. There is a sign advertising the ice cream shop right on the trail, shortly after you have crossed over from the temporary end of the trail past Middlebury, and taken the .7 mile jog onto the county roads to pick up the trail again. Sparky has always wondered about the shop and finally stopped. It's fairly new and opened in 2020. It was terrific! Besides wonderful flavors of ice cream being offered, it's the Amish neighborhood popular stop as well, so you will see lots of Amish or Mennonite folks standing around, waiting for ice cream, and horse drawn buggies or carts hitched to the hitching posts. It's a farm with an ice cream stand! Great cheeseburgers, too.

Back to another part of the trail, the Maple Leaf Greenway through Elkhart. There are some interesting sights even in a residential area. Some cool artwork on the Goshen Water Treatment plant.... 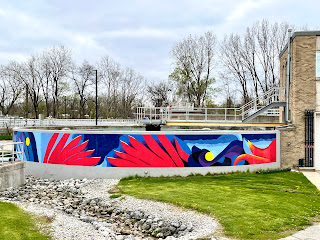 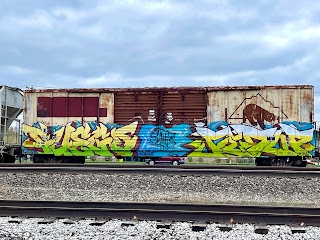 If you visit Elkhart, you will hear the sounds of trains and their horns all over town. No matter where you are. That's because Elkhart is the second largest train yard in the nation! It used to be the largest. You might have trouble crossing train tracks without having to wait on a train in the city and surrounding areas. For a LONG time. Trains sometimes block the tracks and sit for hours, many trains blocking many different track locations because of train yard logistics. There have been instances of trains blocking the tracks for more than 20 hours. What to do if that happens if you don't know the streets to get around the train tracks? 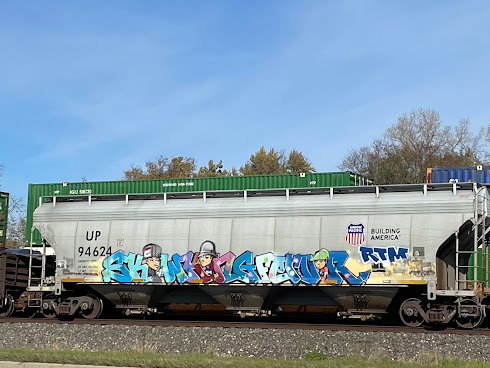 Study the graffiti, the protests and messages, on the side of the rail cars maybe. Just kidding. But Sparky thinks some of the train graffiti is beautiful. Some of it is crudely drawn, others seem to have been done by professionals. She knows, it's vandalism, it's dangerous that they do it and illegal, maybe it's gang related stuff, but she still thinks it's cool. It's hard to read, anyway, but the color usage and the imaginative way the letters and messages are portrayed, is a form of art, in her humble opinion. Let's face it, train cars are ugly! Having said that, Sparky went and did a little research on train graffiti, and after reading a bit, she is tempering her feelings about it based on her ignorance. 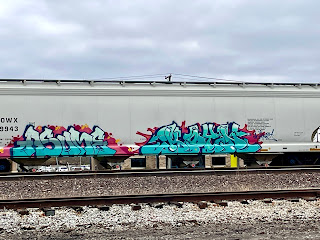 Sparky found out that train graffiti sometimes covers up important information such as who owns the freight car, how much it can carry, dimensions, safety information and maintenance data. If the graffiti covers that, railroad workers and shippers lose important information, deliveries get slowed down, maybe an accident occurs. Some railroad companies try a special paint by Sherwin-Williams, called Anti Graffiti Coating, which repels paint, spray can paint, and permanent markers and makes graffiti easier to wash off. By the looks of LOADS of freight cars with most of them covered in graffiti on the lower levels, the railroads are losing the battle or it's too expensive to repaint the trains.

Sparky always thought that these "fly by night" artists were using spray cans from the local hardware store. Probably not. There's  a whole industry devoted to graffiti supplies. Just do an internet search on that, you should get over 20 million hits. Supply stores sell everything graffiti related-among other things- duffel bags designed to hold LOTS of spray cans and special tips for the cans to create a variety of fills and lines. Sounds like cake decorating!

On to graduation weekend! Eldy's granddaughter, Cate, graduated from college this past weekend. So off we went to Illinois to celebrate her success. 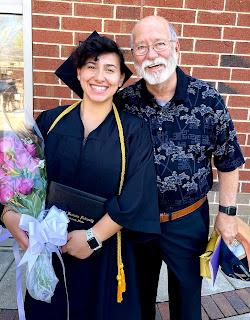 It's always wonderful to see your grandchildren grow up and successfully complete a stage in life--with honors, no less! 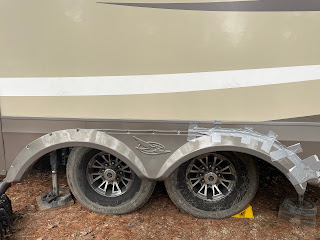 The rest of the visit in Elkhart was spent visiting with family and fixing a few things on the rig--like our busted fender on the RV. We managed to find a replacement fender and got the old damaged one off (from the tire blowout last fall) without too much of a problem except for the residue left behind from Sparky's overzealous duct tape job. Looks like a tough job! Good old duct tape-- it sure held the fender on for awhile. Gonna try Goo Gone, a light heat gun (crafter one) and a plastic credit card. We will let you know how that works out! 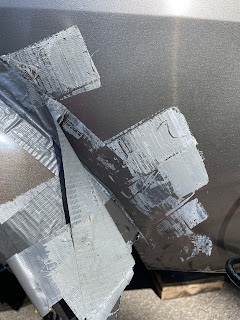 Well, I'll be darned. It worked out pretty well! Sparky ended up using a hair dryer instead, an old credit card and the Goo Gone adhesive removal product. She would like to warn anybody that uses Goo Gone that it did affect the paint a bit...it left a little hazy finish on the panel. You barely see it unless you look close. We're hoping that some wax and a bit of polishing will get rid of that. 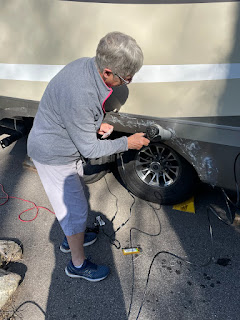 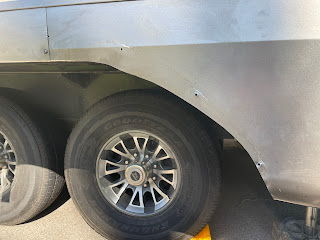 We put the new fender on with the help of Eldy's son,
Brian. There were some foam pieces that were on the back side of the old fender, sort of like bumper pads, that the screw went through. They were ripped and torn, so Sparky whipped out some black adhesive craft foam, spliced three long strips together, then cut them into little rectangle pieces to sit behind the screws. We think they are intended to buffer the movement between the fender and the side of the rig at the screw joints, as we are bouncing down the road. Lastly, we put silicone caulk in the seam between the rig and the fender to reduce wind getting in between the panel space and the fender, and it's done! Tada! 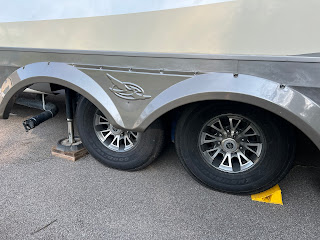 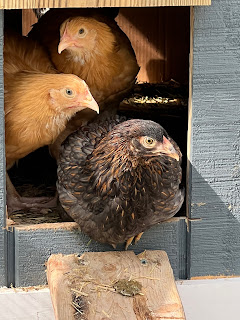 After a peaceful week with family and visiting with the chickens Brian is raising in an amazing coop he built, we headed back to Twin Mills. As much as we love staying at Camp T*******, we don't want to overextend our stay and we don't have sewer hookups, so it's time to let the family have some breathing room and prepare for heading to Lippert in Elkhart, IN for slide diagnostics and possible repairs. We will see family again in October.....
Hopefully, the awful heat that is plaguing some parts of the country now before summer even gets here, is not going to be how the summer will be in Maine where we are heading in a couple of weeks! Our main worry for now is that we have heard there is a diesel shortage on the east coast, and the price of fuel is over 6.00 a gallon! We debated back and forth about staying in the midwest for the summer, but there are fewer membership parks here, and the temps will be HOT, so we think we are going to go ahead with our plans to get to Maine. We will have to be super cautious about watching our fuel tank, as it is a small one on the truck. Big truck, small fuel tank, 36 gallons for our big dually, go figure. Guess Fords come with bigger fuel tanks, but it's still going to be an arm and a leg regardless of whether you have a Ford or a Dodge Ram for filling up. See you down the road!
Posted by Jeannie and Eldy at 12:07 PM