A Long Journey to Kentucky 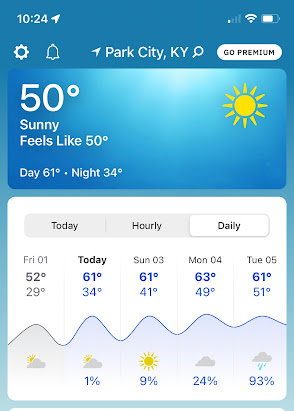 Rvers like to know how other RVers travel from destination to destination. So here we go....from Lake Conroe, TX to Mammoth Cave, KY, our distance covered this week was about 1,037 miles. We did it in three days to avoid getting caught in severe weather storms this down south. Here's how we went:  From Lake Conroe to FM830, then Texas 75,  to FM3083, then 336 Loop, to Texas 105, then 69 south,  then I-10 East. We spent the night at Cajun Palms, (site 37) in Louisiana. We drove through Baton Rouge, crossed the bridge over the mighty Mississippi, picked up I-12 East, then I-65 north. Our second night we stayed at Gunter Hill, COE park (site 68 back in) near Montgomery, AL. Back on I-65 the next morning. Traffic was totally shut down on I-65 due to bridge work so we were rerouted to 31 for awhile until we could pick up I-65 again in Decatur, AL. Then on to Park City, home of Mammoth Cave National Park.

We traveled over the amazing Atchafalaya River Basin Bridge, with which is over 18 miles long, and the third longest bridge in the US. Pretty amazing architectural feat building this bridge over swampland, with the river basin in-between the bridge sections, isn't it? Wonder if the bridge ever floods? 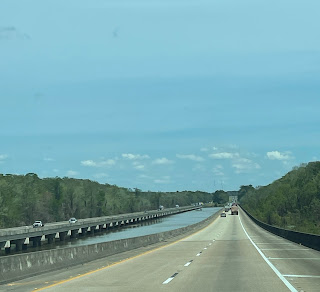 We liked this particular route because there are more decently rated parks traveling this route. We really like Cajun Palms RV resort. It's our second time passing through at this park but we could easily stay for more time. Not cheap, about 66.00 a night, but what a nice park! Wide spacious sites, beautiful pool area which wasn't opening for a few days yet. 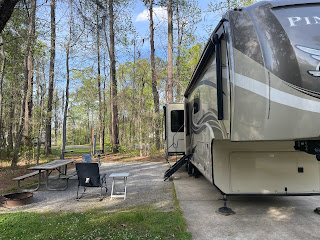 Our second night was at Gunter Hill, a Corps of Engineer Park, near Montgomery, AL, a park we have stayed at many times. The sites are HUGE...Sparky found a new trail she had not seen before that was in a different section of the park. 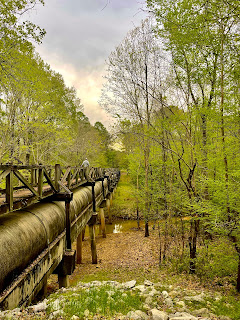 As it is late March and the weather has been very abnormally chilly here in Alabama, the spring flowers are not up yet. But Sparky did find beautiful, wild Atamasco lilies blooming. 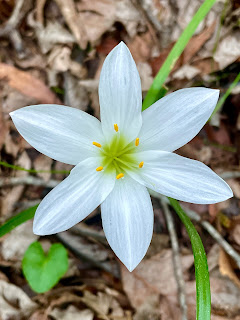 This is the park where a rogue limb took out BOTH our awnings out last year. So when we heard there was a big storm brewing and going to hit the area with high winds, we decided to leave the next day and put in a big driving day of over 400 miles to get further away from the bad winds and possibilities of tornadoes. But we managed to get a dinner at Jim 'n' Nick's...a really great BBQ place with the most amazing sweet little dinner biscuits in Prattsville, AL, a nearby town, before we left the next morning. Sparky bought some extra biscuits to freeze, they are THAT good! 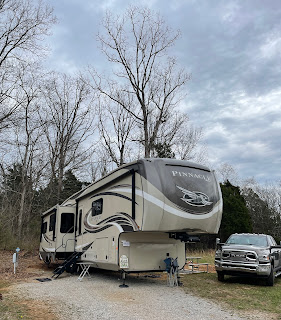 And we made it to Thousand Trails Diamond Caverns RV and Golf Resort. It's really not as swanky as it sounds. The RV park is quite small, showing its age, and there are quite a few annuals/seasonals in many of the sites, so it's not easy to get a site without planning way ahead of time. Sites are not very level, but we found one that an annual person had just left their site which was decent, and moved back home. So we snagged it! Sparky is excited about hiking inside Mammoth Cave National Park, and biking the very strenuous rocky gravel bike/hike trail, which is 7 miles one way from the RV campground to the park office. We have done cave tours in the past, so we will skip those this time. Hope the weather improves. It's going to be quite chilly this week with lots of clouds. See you soon on a few of those biking/hiking excursions!