How to Find Moose Near Moosehead Lake in Maine

You have to have a strategy...We have been only been marginally successful in previous visits to Maine to see moose. Mainely, (pardon the pun, haha) because we have been there usually in July or later. It's hot, the moose are not around the roads as much as they have taken to the ponds and are trying to stay cool in the waters of marshes, lakes and other mosquito laden areas during that time of summer. The last time we went moose hunting in Greenville, we looked down a logging road one early evening and saw a mother and her baby walking down the logging road. That was after multiple  trips every evening for several days, up and down logging roads, scanning swamps and watering holes, just the pair, that was it. 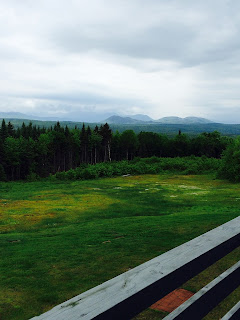 But this year, we were in Maine the first week of June, and the BEST time for seeing moose is late spring and very early summer, just after the calves are born--May thru June, the locals said. HOT DOG! We just might have a chance to see some. So, we drove over to Greenville, Maine, and stayed at a local motel for one night. Accommodations are different in Greenville...Not as fancy as Bar Harbor, a little older perhaps. Rates are great this time of year...Less than 100.00.

We stayed at Kineo View Motor Lodge, which we highly recommend as a reasonable place to stay while moose hunting. The lodge has fantastic views of the nearby mountains. However, the price goes up mid June for the short tourist season.

Here's our moose hunting strategy if you are heading to Greenville, Maine....Stop at the visitor's center on the way into the town of Greenville. They have some literature and a location list of where are the best spots for viewing moose. There used to be a great spot in Shirley, just down the road, where the Department of Transportation would have salt blocks for the roads for winter. People would drive up at dusk or dawn and park their cars along the road by the marsh by the dozens where the chances of seeing moose were excellent--except we did that several times on our last visit, both dawn and dusk, and never saw any. We were told at the visitor's center, that the department is not storing salt or using something different for winter roads now, so the moose no longer frequent the Shirley D.O.T. location, at least not much at all. We checked one night, just to see, and saw nothing. 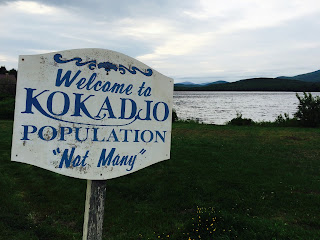 The next best viewing spot is a few miles north of Greenville. Head out on the only highway out of town, north, (Lily Bay Road) and watch for entries to logging roads and watch for moose along the road intersections, north of Lily Bay State Park, all the way to Kokadjo, a tiny town further up the road, a distance of about 27 miles.

The first night we headed out---JACKPOT! Almost immediately after Lily Road State Park, we saw our first moose, a young one! She was on the left side of the road and just decided to cross the road in front of us and over to the other side. We were only going about 25 miles and hour, constantly scanning the roadside and logging road paths, and BOOM! there she was. We stopped right in the middle of the road to watch her cross. (Nobody was coming, Eldo kept watching.) We're going to say she, because this time of year, the males should be just starting to develop a new set of antlers. No knobs on this one. She didn't see us at first, she was just moseying along. Then she turned and noticed us. If you can enlarge the photo, you can see the "deer", er, "moose-in-the-headlights" look. :-) 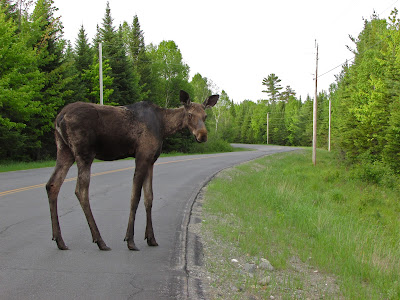 A truck came barreling down the road, probably a local who sees moose all the time, so this young one trotted off. We hadn't gone but a few miles further and we saw THREE moose in the brush, eating shoots off the trees. One moved out into the open. We managed to catch her eating out in the open. 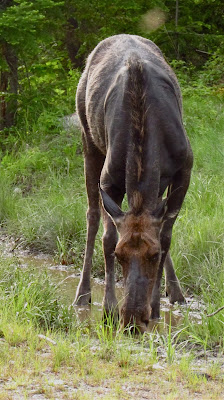 And then two came out of the brush and started trotting along the side of the road.....We think this was a mother and her young one. 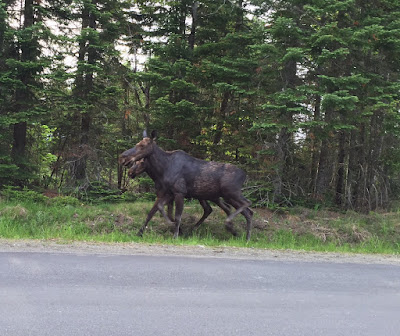 WOW! This was GREAT! We were truly pumped to have seen FIVE moose so far! All females... We had one more early morning ride we could go for. Sparky cringed at the thought of getting up at dawn, so she didn't! We actually went out about an hour AFTER the sun rose, Sparky just had a good feeling that we were going to see some more moose. Especially after checking into our room the night before, and seeing this sign on the door: 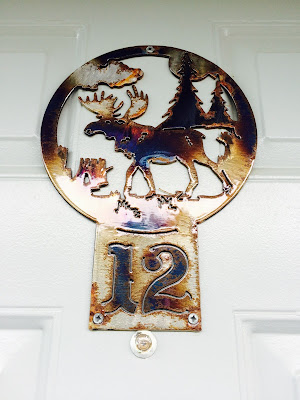 There was a different enameled (?) crafted sign on each door of the motel. It was an omen! Did we see more moose the next morning? Yup! Two more! And one was a BULL moose! Yahoo! Not the best photo, he was bogeying along the side of the road. 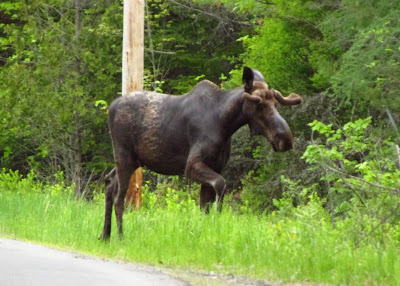 We saw our last moose near a logging camp/site entry.....We drove by, and Sparky saw what she thought was a statue...A moose statue. You know how you sort of see something, you think you see something, but you say to yourself, naw, that's not what I think it was--WAIT---STOP THE CAR, ELDO!  It's a REAL moose! That girl was standing so stock still, not moving a muscle, that Sparky thought it was a moose statue at the logging camp!  Eldo stopped, and Sparky caught a photo, just as a giant logging truck came and turned into the driveway...She took off.... 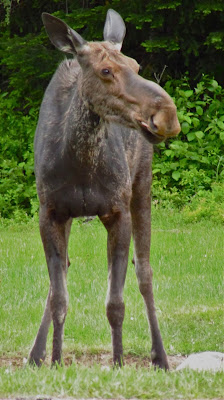 A total of SEVEN moose on our very short visit (a day and a half) to Greenville this week...We were so happy and thrilled that we got to see so many! This time of year, the end of May and the first week of June were just the perfect time. BUT--you never know....where they are going to be, or what their traveling patterns are like. Someone else could go the same time next year, and see nothing....We never saw them in the water or near the water, they were all standing shortly off the side of the roads or in open intersecting road areas. So we wish anyone hunting moose the best of luck! We hope your luck is as good as ours was!
Posted by Jeannie and Eldy at 7:47 PM