So How's Sparky's Diet and Type 2 Diabetes Coming Along?

To clarify right off the bat...Sparky erred in the diabetes diagnosis. She has type 2, not type 1  diabetes. She went back and reviewed the comments and caught the mistake in the blog.

Just in case you are wondering....Sparky feels the need to be accountable to her family AND herself, so by going public and talking about how things are going, maybe that will help someone else! So far, by picking up exercise and riding her bike more, (15 miles at least three times a week), cutting out regular Coke every morning, and starting to watch portions and carbs, Sparky has lost ten pounds. (And she doesn't eat a handful of peanut M & M's every day any more either, adds a helpful E.) How are the glucose readings going? Not the best that they can be...According to some information Sparky has gleaned from lots and lots of reading...SUGGESTED guidelines for acceptable glucose readings should be:
Fasting level (first thing upon waking up after not eating for 8-12 hours since the night before)
80-120
1 hour after a meal:  <160
2 hours after a meal: <140
3 hours after a meal: <120
Bedtime:  120-150

Sparky is not sure whether this is for people just trying to get their numbers down and who aren't on medication yet (that's her), or if this is for people who are on some kind of diabetes medication. She will find this out at her next doctor's appointment. But for now, she is using these guidelines to keep a food diary and testing her sugar 4 times a day for the probationary period, looking for patterns and spikes in food ingested. Sparky has another three months till she goes back to the doctor to find out what her A1C level is and whether it's stabilized, lowered, or she's in big trouble. For anybody curious and new to diabetes information, your A1C level is a blood test that gives the doctor an idea of an average of glucose levels for the past three months. You don't fast for this particular test. When Sparky found out she had diabetes, the criteria was, said her doctor, anyone who is 6.5 or higher on their A1C test is Type 2 diabetic. THAT was Sparky's wakeup call. She was 6.5...She had read that usually a second test is run within a certain amount of time of the first one, and if the second one came out with 6.5 or higher, that was the official diagnosis. NOPE! says the doctor...You're there, you're diabetic.

Sparky has learned a few things...

1) She has to deal with the "Dawn Phenomena"....that is where your blood sugar rises in the wee hours of the morning even though nothing has been eaten. Everybody's blood sugar rises around 4-5 AM even if they are NOT diabetic. But in people with Type 2 diabetes, it jumps up more. Sparky's sugar is quite a bit above the fasting morning level, anywhere from 120-140...The reason for the blood sugar rise is people with diabetes don't have normal insulin responses to adjust for this, so they might see their blood sugar go up. Her body is making less insulin and more glucagon (a hormone that increases blood glucose) than it needs. Suggestions to combat this have been to get a little more exercise in the evening, or to eat a little protein snack right before going to bed. Sparky has tried the snack route, and sometimes it helps, and sometimes it doesn't. The hard part is figuring out the best snack. Sparky doesn't like eating after dinner, she NEVER snacks after dinner and hasn't for years. (WAIT A MINUTE! says E., wanting to clarify. WHAT ABOUT OUR ICE CREAM SNACK a couple of times a week?????) Uh, well, uh....yes, we do have occasionally, a little teeny tiny serving of Hagen Daz ice cream now and then. (WAIT A MINUTE!....interjects E. Don't you mean the big size tubs and not the little ones?) AHEM! Whose story is this, anyway? grins Sparky. As she ways saying, you know those little serving cups they sell at the grocery? That's USUALLY what we have if we want some ice cream. And actually, that HAS had a favorable effect on blood sugar the next morning. Guess that little bit (OK, a LOT) of creamery fat has helped. So ice cream is good sometimes, in small doses...Sparky has also tried nuts, cottage cheese, and a cheese stick to get that morning sugar level down (But not all together, haha.)

2.) Things that Sparky thought would make her blood sugar jump through the roof, haven't. Like having a meal at the Cheesecake Factory---big green salad, Vietnamese summer rolls (thin wraps with asparagus, rice, mushrooms, carrots and shrimp served with peanut sauce and teriyaki sauce) AND a slice of strawberry cheesecake for dessert. Barely a jump....

3) Eating leftover pizza for breakfast is a bad idea, a big jump in blood sugar....Eating pizza is bad  most of the time, although accompanied with a big green salad first helps. Sparky used to eat a half of a pizza, no problem. Now, it's two pieces, tops. Hey...baby steps, right? Sparky is NOT giving up pizza....And yes, she knows there are much healthier pizza options out there...whole wheat crust, totally veggie...well, not going that route for now, although we have done veggie pizzas before....Sparky is making changes, whole grain bread for sandwiches...cutting out half the bread on the sandwich....substituting water for fruit juices, making smoothies with spinach and almond milk and other good stuff, eating much smaller portions. Clam chowder, shrimp cocktail and white bread...that makes Sparky's sugar rise quite a bit. Sparky thinks it's the potatoes in the soup, the saltine crackers she just has to eat with the soup, and the cocktail sauce. Probably all the carbs and hidden sugars in the sauces...sigh....

4) Sparky has discovered that you can't make generalizations about a diet when you are working to get your blood sugar down. What works for some people is not going to work for others. For some, corn might be a trigger to higher blood sugar numbers, for others, it won't be. And there's hidden sugar everywhere! Ketchup, hamburger buns, sandwich bread.....processed foods (which Sparky is trying very hard to stay away from)...Surprising where you find sugar. Sparky saw on a nutrition label that there are 3 grams of sugar in Publix grocery's cottage cheese! Why in the world does cottage cheese need sugar!?? Sparky is reading food labels really closely. Is Sparky doing sugar free everything? No, because she doesn't normally eat much sugar anywhere in her regular diet, at least not any more...no coffee with sugar, no sugar sweetened beverages, no more carrot nut muffins...sigh...Sparky thought she was eating a decent breakfast with one carrot nut muffin--lots of vitamin A in those! But too much fat and carbs. Now, about ice cream, she's putting her foot down on that. Not going sugar free ice cream. Let's tackle the really bad stuff first! Sparky was eating too much candy and drinking too much pop. So that's a given...it's OUT!

5) Mexican food jacks up Sparky's sugar...she thinks it's the corn tortillas and the chips before the meal...(Her favorite meal is shrimp tacos with mango salsa) Sparky's sugar levels appear to be sensitive to corn. She is still learning what other restaurant meals are triggers. We'll have to keep testing different restaurants, she thinks...  (GROAN......) Guess who that was? :-)

You have to find a diet that works for YOU! Sparky talked to the nutritionist at her doctor's office, and it was like talking to a person speaking a foreign language. She wanted Sparky to try nut butters, tempe, bulgar, quinoa (Sparky tried that---no thank you!) and kept giving her recipes...(Oh, that was a mistake! laughs E.) Sparky kept telling her she hated to cook, but the lady wasn't listening very well. Sparky thinks the nutritionist was a vegan, nothing wrong with that, but as Sparky was formerly a meat, potatoes, and pasta gal from the midwest, we couldn't get on the same page and speak the same language! Sigh.....Sparky knows what to do to do better....If we're going to eat out...grilled stuff...salads with vinegrette dressing, but even that can have a fair amount of sugar in it....Cooking with olive oil...(if and when she cooks, grins E.)  Lean meats, less beef, more fish (ugh), smoothies with veggies and fruit...fresh fruit....lots of water....not very many diet drinks...She's on the right track, she thinks...We'll see what another month brings...(You can't tell Sparky very much on what to eat, she's a very picky eater!) Yes, that's true...sigh....But she is trying!

Sparky found this magazine which she really liked....Some great information, some USEABLE recipes, (don't hold your breath says a resigned Eldo)...and healthy living tips for anybody, not just for those who are dealing with diabetes.... 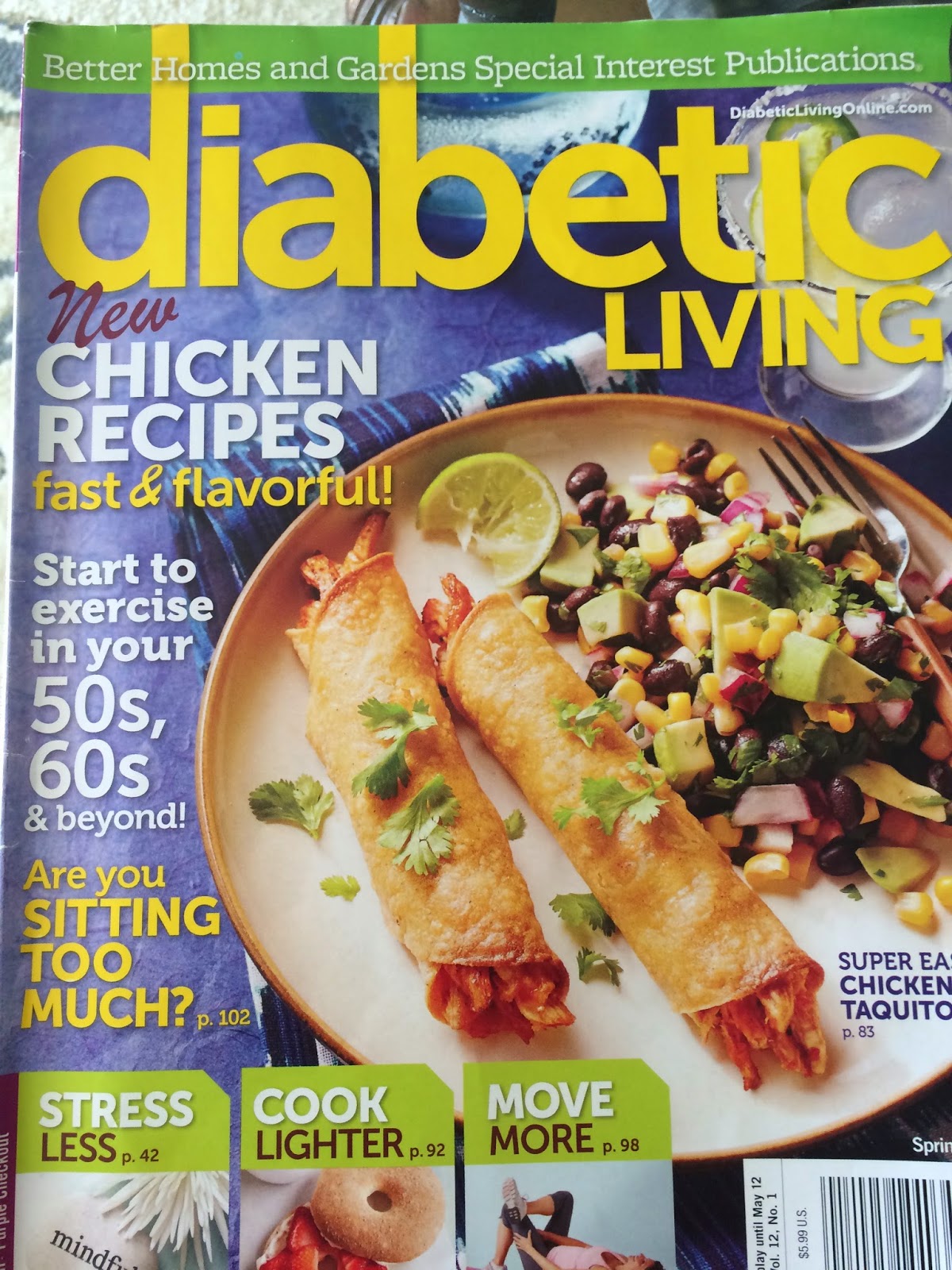 Oh....one more thing...You can buy an A1C test (2 tests in the kit) at Walmart for about 25 dollars. Sparky tested herself after two months, and she is at 5.7 according to the test, so she is encouraged to see that the weight loss and trying to watch her diet seems to be helping. But--the doctor's office is the official test, so next month will be the decision....Meds or no meds....Sparky is really hoping not to have to take medication and will try harder to lose a few more pounds and try harder on the diet aspect....She will report back on this subject at her Introduction to Medicare appointment in July.

UPDATE....Sparky went in for a recheck on her sugar levels, and her doctor is VERY happy with her results so far...Sparky's A1C level is 6.2, NOT what the Walmart test said, but the doctor was still ok with that. She said if Sparky can stay under 6.2 and fine tune her diet a little more, no meds will be needed. HOORAY! But it just goes to show, that you can't always rely on the little lab tests sold in stores and for something like this, you really need to be checking in with your doctor on a regular basis.  Sparky still needs an eye exam to make sure nothing funky is going on with her eyes with the high sugar diagnosis....Okay...NOW she can say, until next time......

Posted by Jeannie and Eldy at 8:00 AM