Gather Round All Ye Fair Maidens and Gentlemen!

It's the Medieval Fair in Sarasota, one of winter's highlights not to be missed, according to everything you read in the local papers....For three weekends in November, people were encouraged to come out and drink ale or mead, dress like a peasant, and participate in all kinds of medieval activities and see how the peasants and nobles entertained each other back in the day....No torture involved....But live jousting! Sparky was intrigued from the descriptions.

Sparky had never been to a Medieval Fair before, so she went to check it out. Eldo declined as he had other things to do....It was fun! But it was a hot day....So Sparky didn't last as long as she would have liked. This couple was appropriately (?) dressed for the weather. There were TONS of kilts worn by the guys all over the "village". 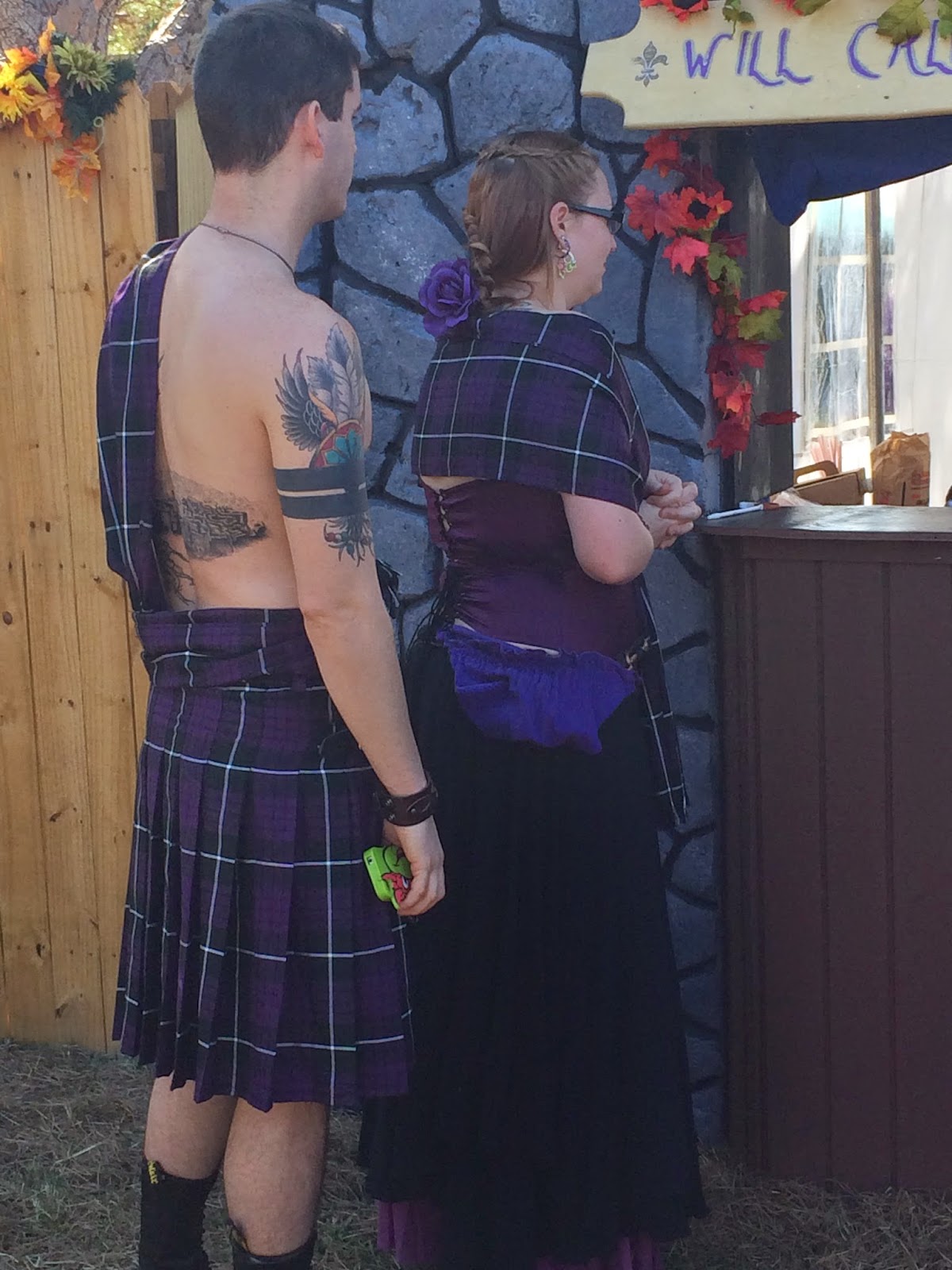 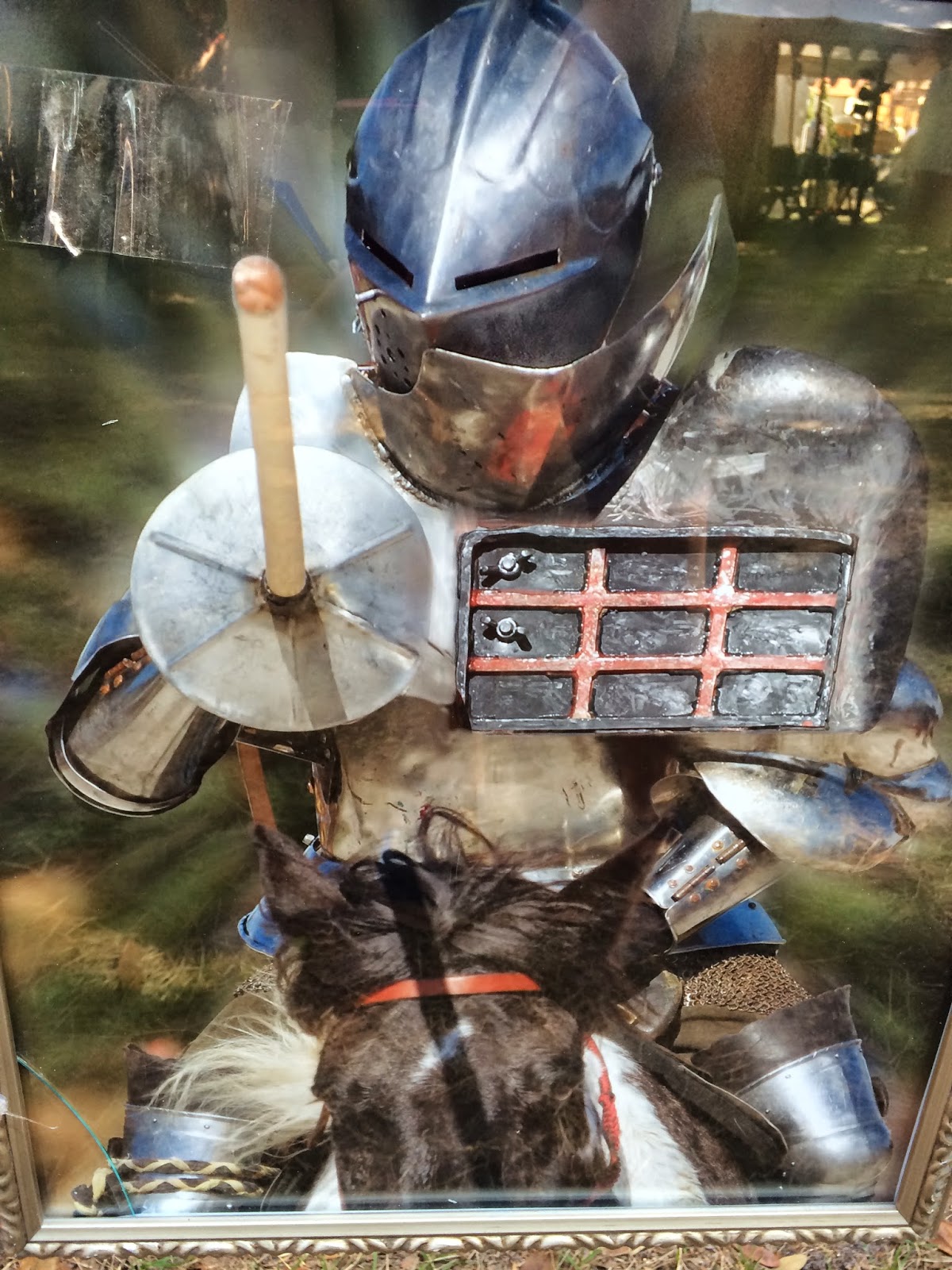 On to the festivities!  The Knights of Mayehm, a group of modern day Lancelots and Galahads performed a variety of staged acts to sports performances. Wearing 130 pounds of armor, they charged at each other with hemlock lances wearing helmets with 1/4" slots for vision. Yikes! Sparky didn't get any photos of the "battle", but she had fun watching the pre joust performances and heckling of the audience by some of the knights. 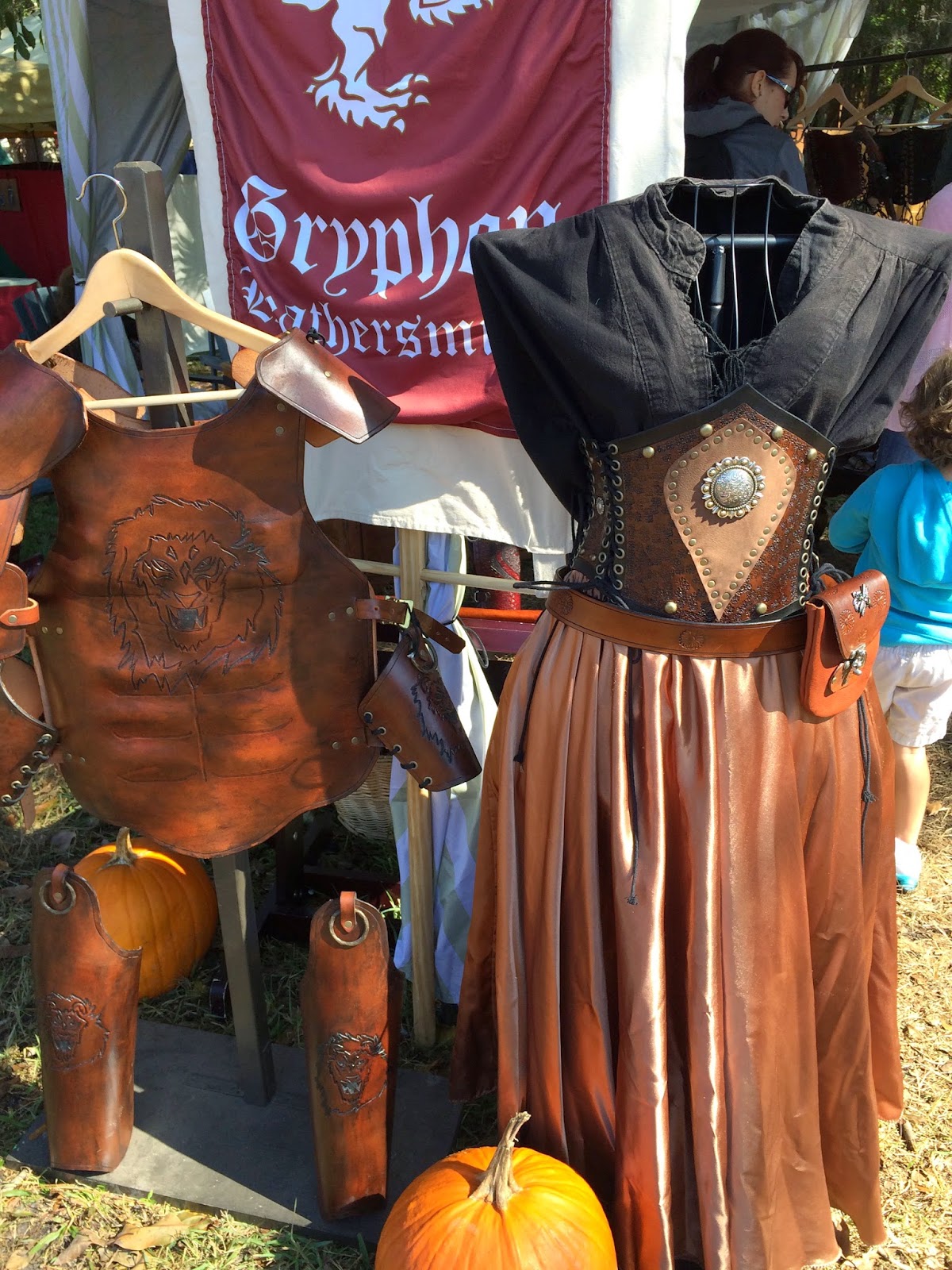 If you wanted to see the only traveling carillon in the United States, it was here at the fair--a showman/organist wearing a scary looking mask (which reminded Sparky of Phantom of the Opera) playing awesome bells totaling 4 TONS, it was called "Cast in Bronze".... The music was played by Frank DellaPenna, a nationally recognized performer of the carillon. The music was AMAZING! If you've never seen a carillon player before, he uses his fists to touch the "pedal" like keys and the most amazing sounds come from the bells. Lake Wales in Florida has the Bok Tower Botanical Gardens, another place to hear beautiful carillon music.... 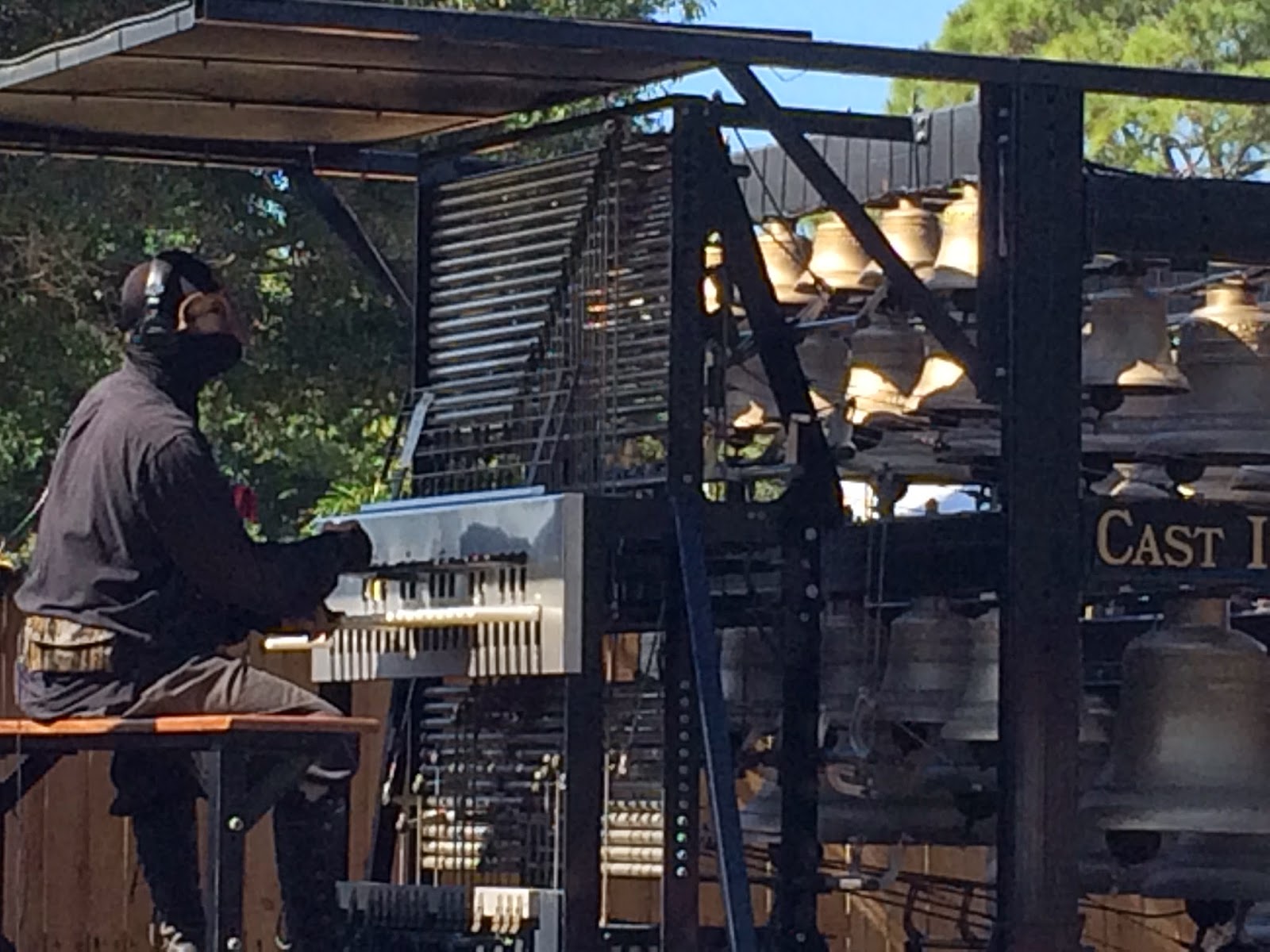 If you wanted to hear some ribald humor, the Washing Well Wenches were here to entertain....Sparky missed the show but heard it was hilarious! Guess you had to watch out if you were sitting in the front row. 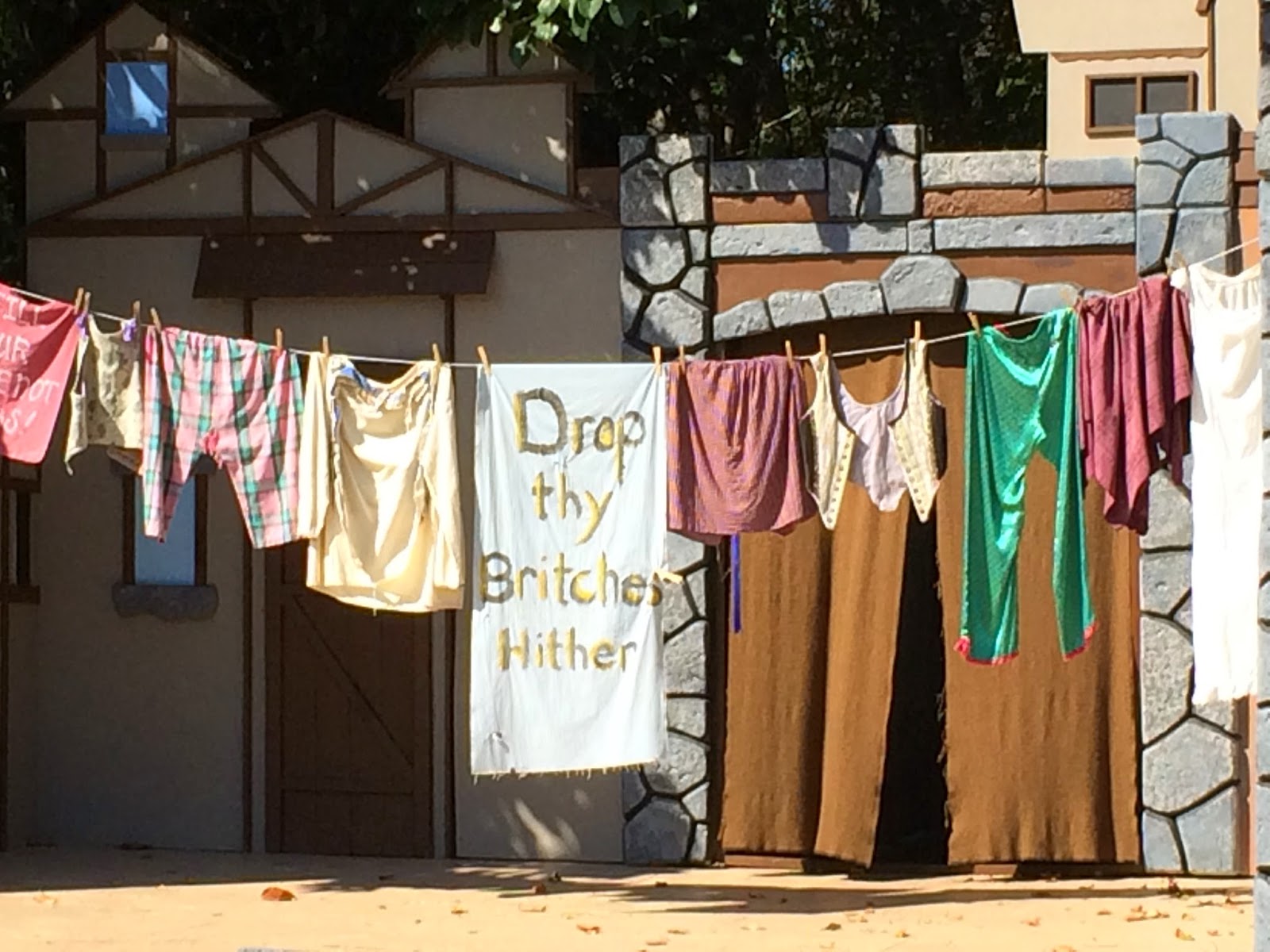 There was a human combat chess match....It looked like great fun! 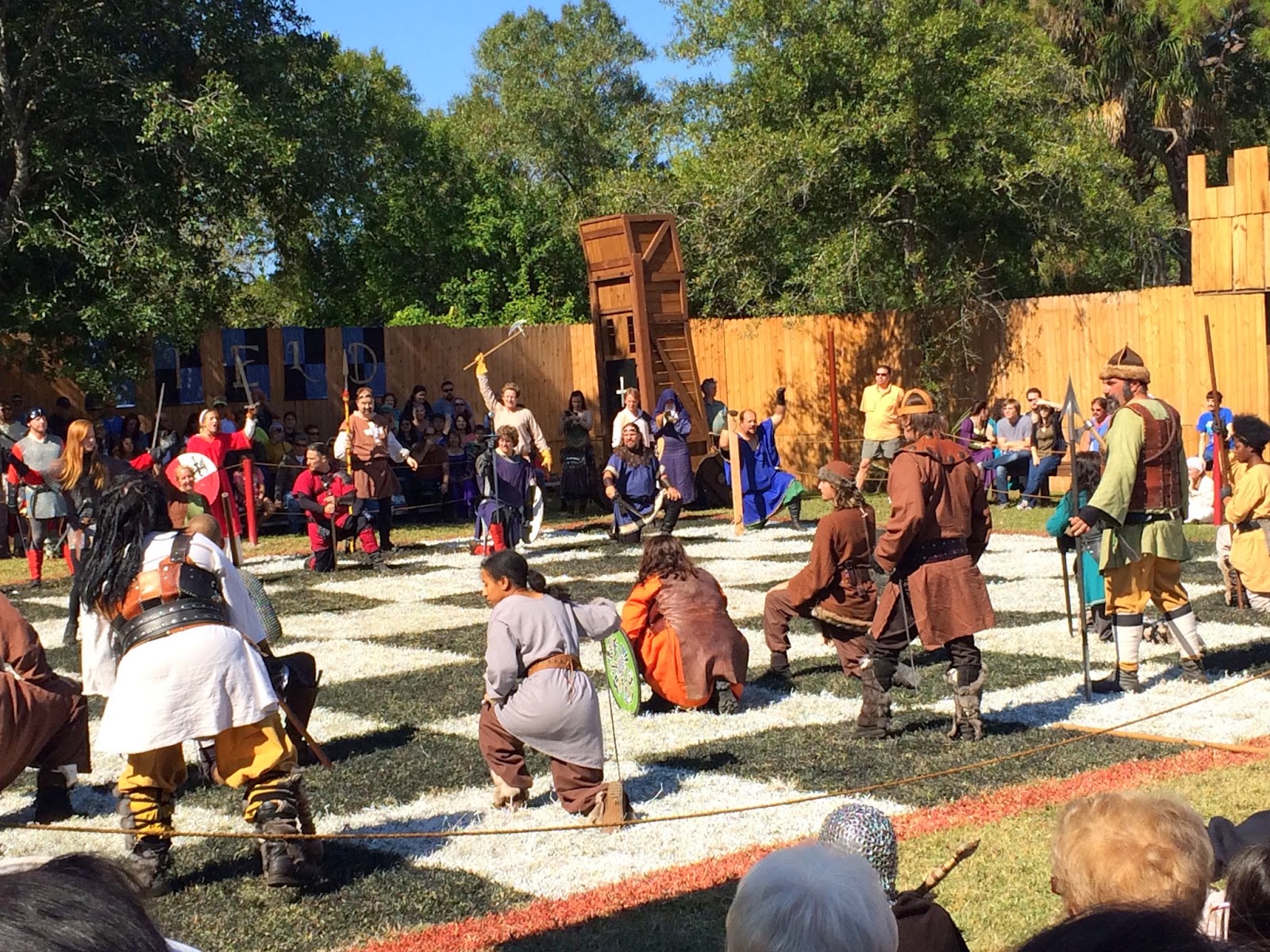 There was great entertainment besides the carillon player....Cu Dubh, (Koo-doo), a bagpipe and tribal drum band that played on Turkish war drums and Highland bagpipes, and a group called Acrobellum--composed of tumblers, acrobats, dancers and fire performers. There was a daredevil act called "Wheel of Death"...But Sparky didn't see that. Everything was family friendly and lots of families were out enjoying this bit of medieval times this day. Lots of food as well, humongous turkey drumsticks were the order of the day.

Sparky will definitely head back next year to see more of the groups she missed....And go earlier to avoid the heat! We'll be back soon with more 2014 highlights....Stay tuned!

Posted by Jeannie and Eldy at 7:00 PM