Our first day out of the cabin, we did some exploring....We wanted to see the town of Cherokee, home of the Eastern band of the Cherokee Indians, town population of about 2100. Not a big town, but BIG in the sense of the cultural history of the Cherokee. The area is rich in history, song, dance, native regalia and of course stories--the stories of how things came to be, fascinating stories.......The city offers the Harrah's Cherokee Casino, an 18 hole Sequoiah National Golf Course,  a large arts and crafts cooperative called the Qualla Center, along with the town being the gateway to the Great Smoky Mountains National Park, with over 800 miles of terrific hiking trails. There's a LOT to see and do here in Cherokee. The Visitor's Center is staffed by members of the Cherokee tribe.

One of the first things that caught Sparky's eye were the bilingual signs everywhere, in English and the Cherokee language. And then, she saw the bears.....they were all over town. Sparky wanted to see REAL bears, and that never happened this week, but that's ok, these Cherokee bear sculptures done by native artists, were very cool....There were quite a few up and down the main street from the visitor's center, which had this cool decorated van parked there. It was very interesting to learn about the Cherokee Bears... 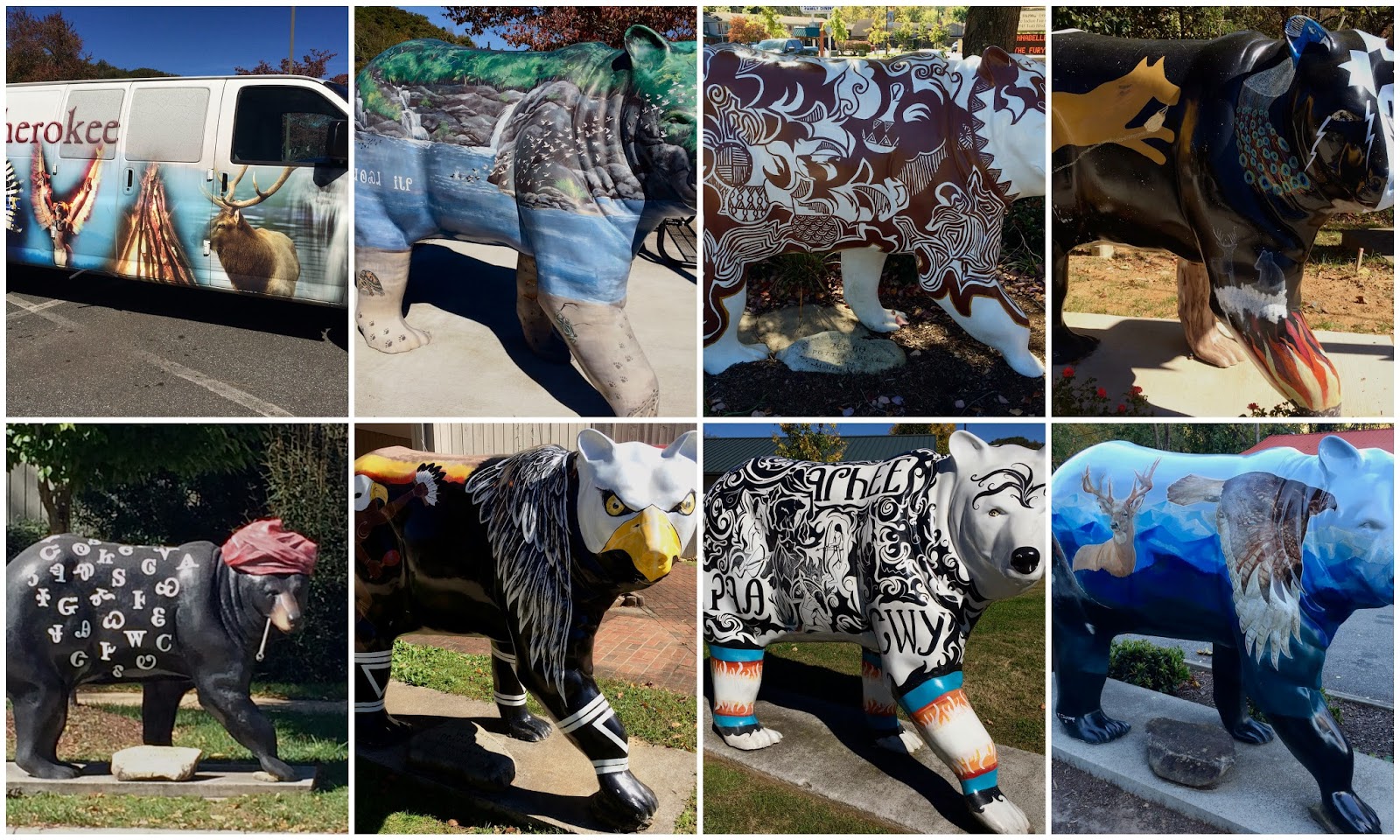 The brown bear with all the symbol markings is called the Pottery bear. The bear with the red hat is the Sequoah Bear, who represents the Cherokee leader named Sequoyah, who was a Cherokee silversmith. He completely created a Cherokee syllabary, which made reading and writing in Cherokee possible. This was the only time in recorded history that someone designed a system that was effective in creating a group of literate people from previous illiteracy and Sequoyah was the man responsible. The Cherokee quickly adopted this system and became more literate than their European counterparts in the area! The black and white bear with the turquoise stripes celebrates this syllabary. He's called the Language Bear. There are approximately nineteen bears located throughout Cherokee, NC....You can find out more about the bears at the visitor center. 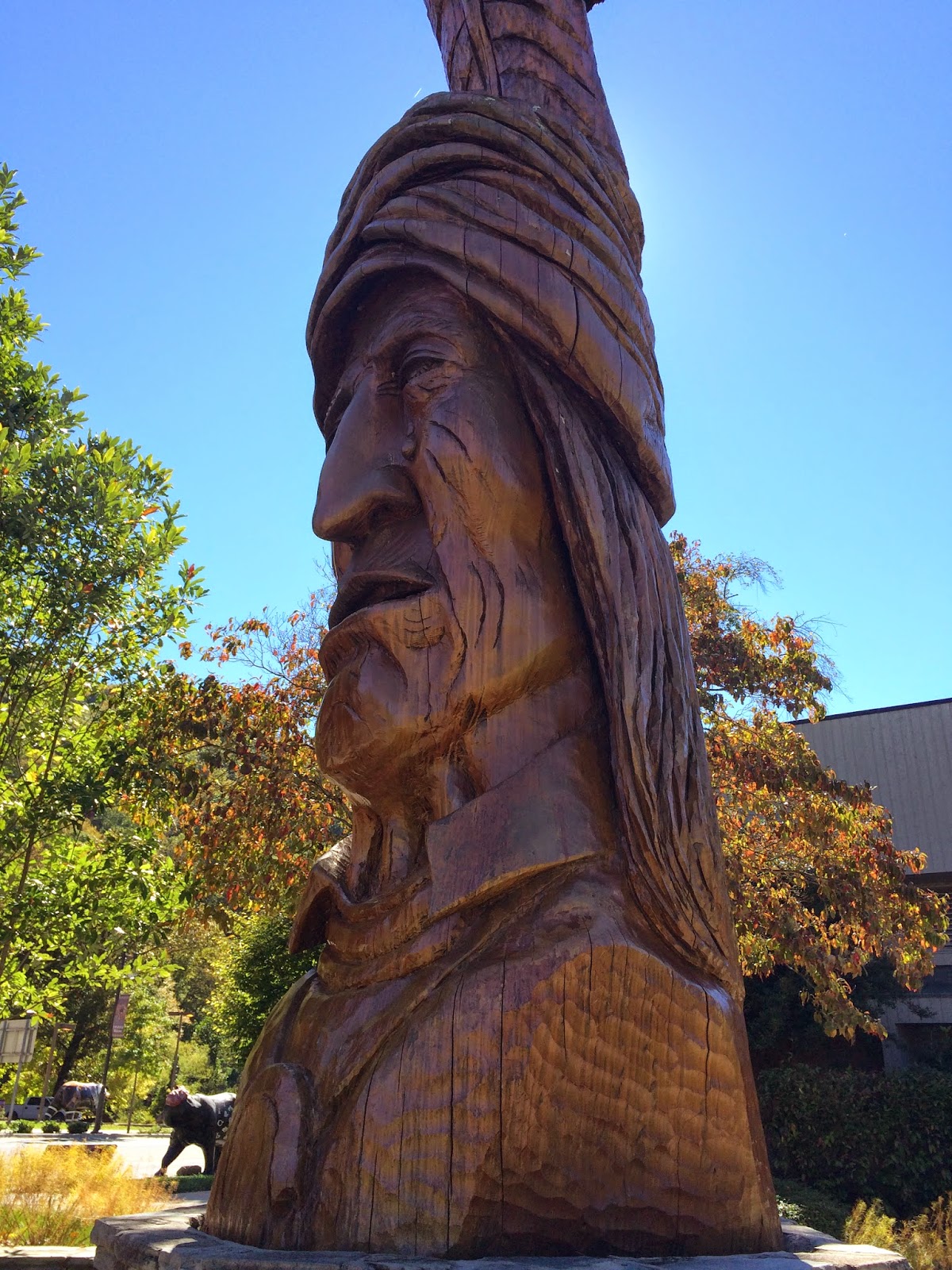 There's a wonderful Museum of the Cherokee Indian in town....Sparky went and saw that this week...
You need a Kleenex to walk through the museum-- the stories of the treatment our native Americans is appalling and upsetting, and not covered very well in American history. A very dark time in the history of our country, and Sparky learned a LOT about what happened in the course of events that led to the Trail of Tears, the eviction and march of the Indians to the west.

The Qualla Arts Cooperative was just beautiful....Cherokee arts and crafts (right up Sparky's alley, explains E.), finger woven scarves and belts, wood and stone carvings, dramatic masks, and beautifully woven baskets of all shapes and sizes. NOTHING made in China, it's all authentic. It's one of the oldest and leading Native American arts cooperatives in the United States. The showroom and gallery are free and open to the public.

Cherokee has two big events that are open most of the year. One is the Oconaluftee Indian Village which depicts life in the 1760's for the Cherokee. It's open from May 1 thru early October, and this year it closed October 18th, so we didn't get to see it. Performances there called "A Time of War" demonstrate the struggles between the Cherokee and European settlers. Bet that would be interesting! Another special event is called "Unto These Hills". It's an outdoor drama that depicts 11,000 years of Cherokee history. It was also closed for the year.

We walked around town...got a bite to eat at the local Burger King...And saw this guy in there...Now that's something you don't see every day in your local town Burger King! 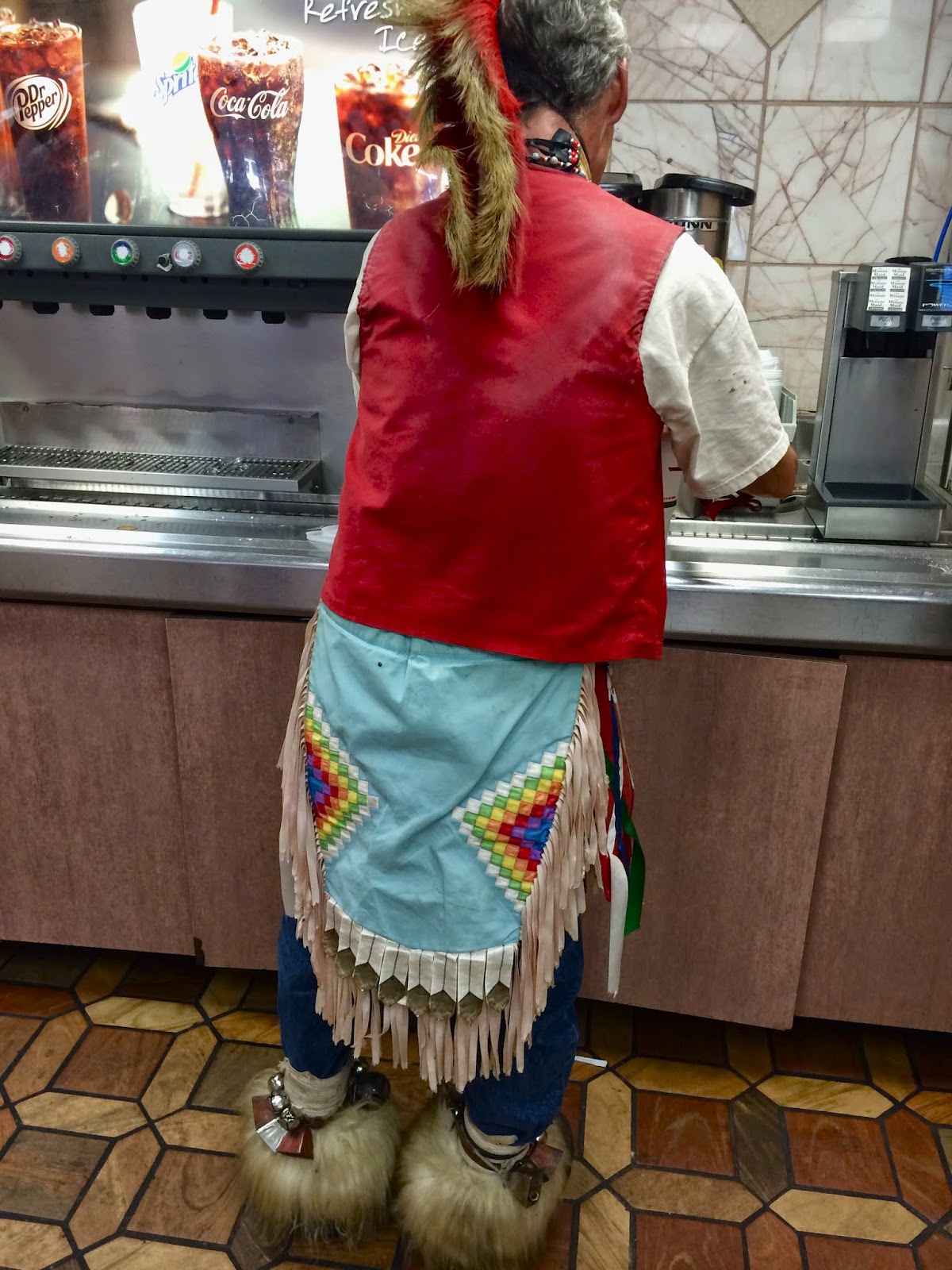 Cherokee does their best to bring native American stories, dance and regalia to the public if the public doesn't choose to go visit some of the sites. They have story tellers and dancers on the main street in several different mini stage locations ready to regale you with stories and lore. There are also many native, touristy shops along the main drag. We didn't go into any of them, that just wasn't our interest while we were there.

As we continued out of town, we headed to the Great Smokey Mountains National Park to explore the park, something we did almost every day we were there..Sparky quickly picked up some GREAT books at the visitor's center...Hiking books, waterfall books and more....More about our NC travels next time...See you on some beautiful trails and waterfall sites!

Email ThisBlogThis!Share to TwitterShare to FacebookShare to Pinterest
Labels: bear sculptures, Cherokee, Museum of the Cherokee, NC, Oconaluftee Indian Village, Unto These Hills