The Best Family Reunion EVER!

Once we got back from Virginia and the mountains, we had a little time to catch our breaths and to get ready for our (Sparky's) family reunion in Traverse City, MI. It's not easy to get a big family to agree on where to go, what time of year, and what activities do they want to be available, but somehow, we all managed to find and agree on Windjammer Resort on the Lake just outside Traverse City (ten miles southeast) for the first week in August this year. The campground/resort is located on the 450 acre Spider Lake just outside the city.

We had a total of 16 family members attend. Sparky was REALLY looking forward to seeing her daughter from Houston and her little grandson, but due to a major delay and engine problems on Kerry's flight, and her little two year old deciding he'd had enough after sitting for almost 3 hours in the plane on the ground at the gate, Kerry was not able to complete her flight,  and had to stay home.

However, once everybody got there, the fun began! But first, a little about the resort, which was really a campground.....There are 9 cabins at Windjammer. Some are VERY rustic, original, and still furnished with very old furnishings from many years ago. Some are modernized and quite pretty. The common area has three log cabins built in 2001, four original cabins and a two story cottage. Two of my brothers and their families stayed in the the largest cabin, up on a hill overlooking all the others. It's a big, log cabin house built in 2009 and was just gorgeous. This cabin, however, does not have a very good view of the lake, you can barely see it from the deck. The other cabins are organized in a sort of semi circle, which was really great for seeing where family members are if they are out and about. This arrangement was great for communicating with each other and gathering in the evenings on the different decks of the cabins. 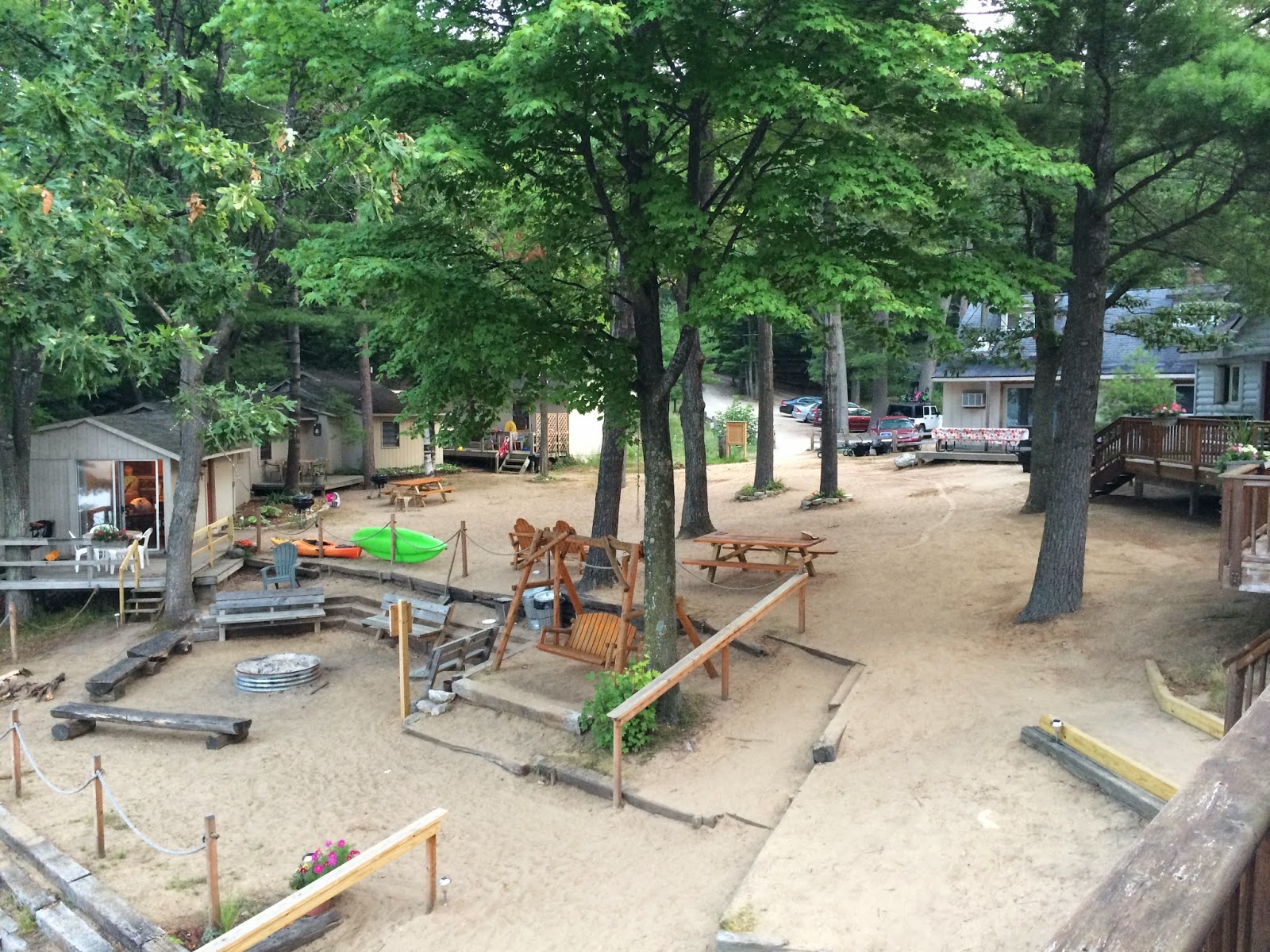 So much better than staying in a hotel, where you don't know when anybody is coming or going, or what anybody is doing. Sparky loved looking out over our deck, seeing her sister across the way, having her morning coffee, or the cousins next door out eating a snack on the deck and knowing she could stop by any time and chat. It was great for communicating with each other, and having some great conversations with family members that you ordinarily wouldn't do easily if you were staying in hotel rooms.

The biggest log cabin, #9, set up on a hill (with only two bedrooms) were oddly appointed. Each bedroom had one queen and one double bed with a corner hot tub in each bedroom and a shower stall. For such a nice large cabin, you would think there would be a little more privacy for couples wanting to stay there and a little more space allotted instead of trying to equip the bedrooms to fit as many people as possible in each bedroom. But it's all about maximizing people capacity, for sure. 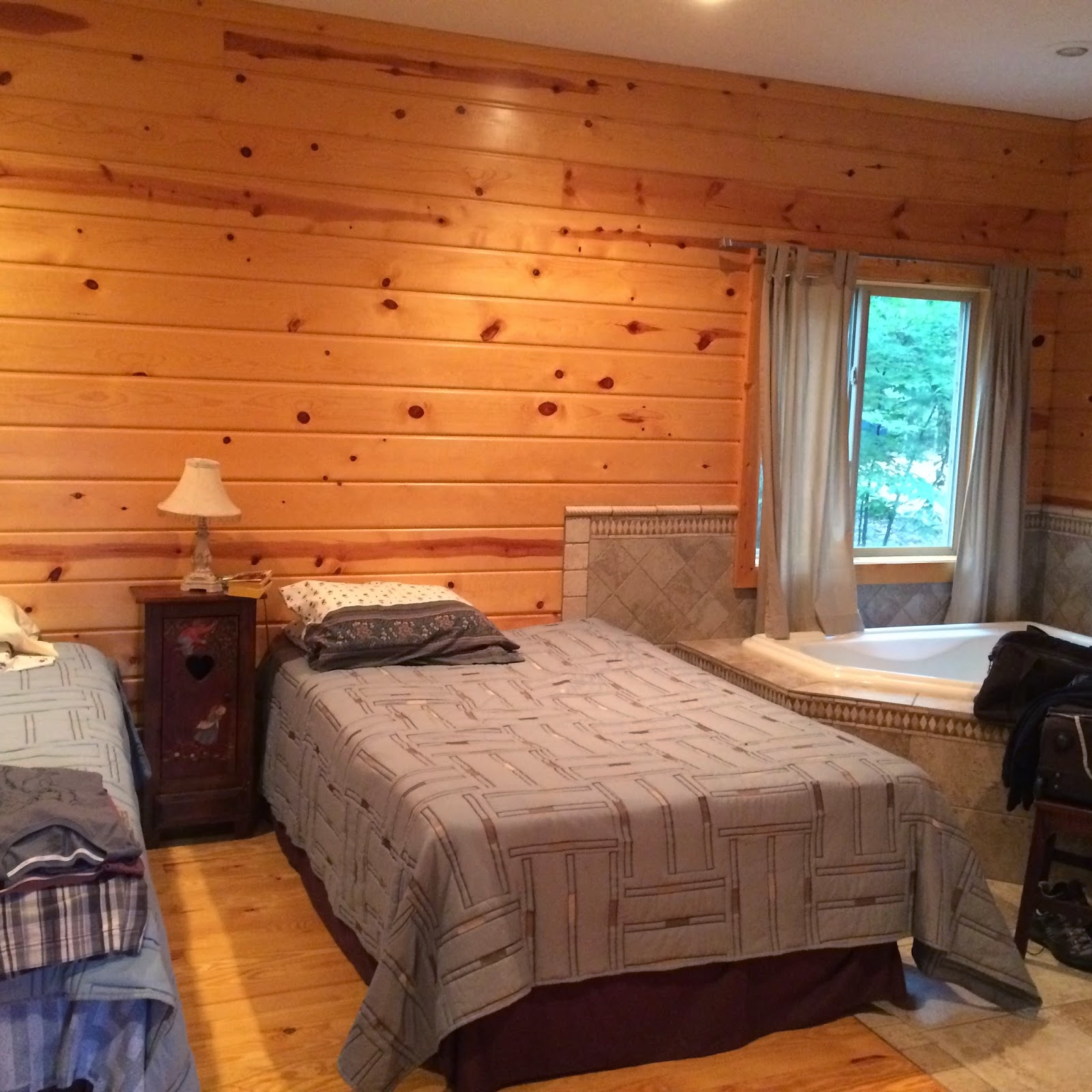 This cabin had a beautiful great room area, a nice long kitchen counter with cedar bar stools, and a dining table area for eating that seats 6. The living room had a hide a bed in the couch. 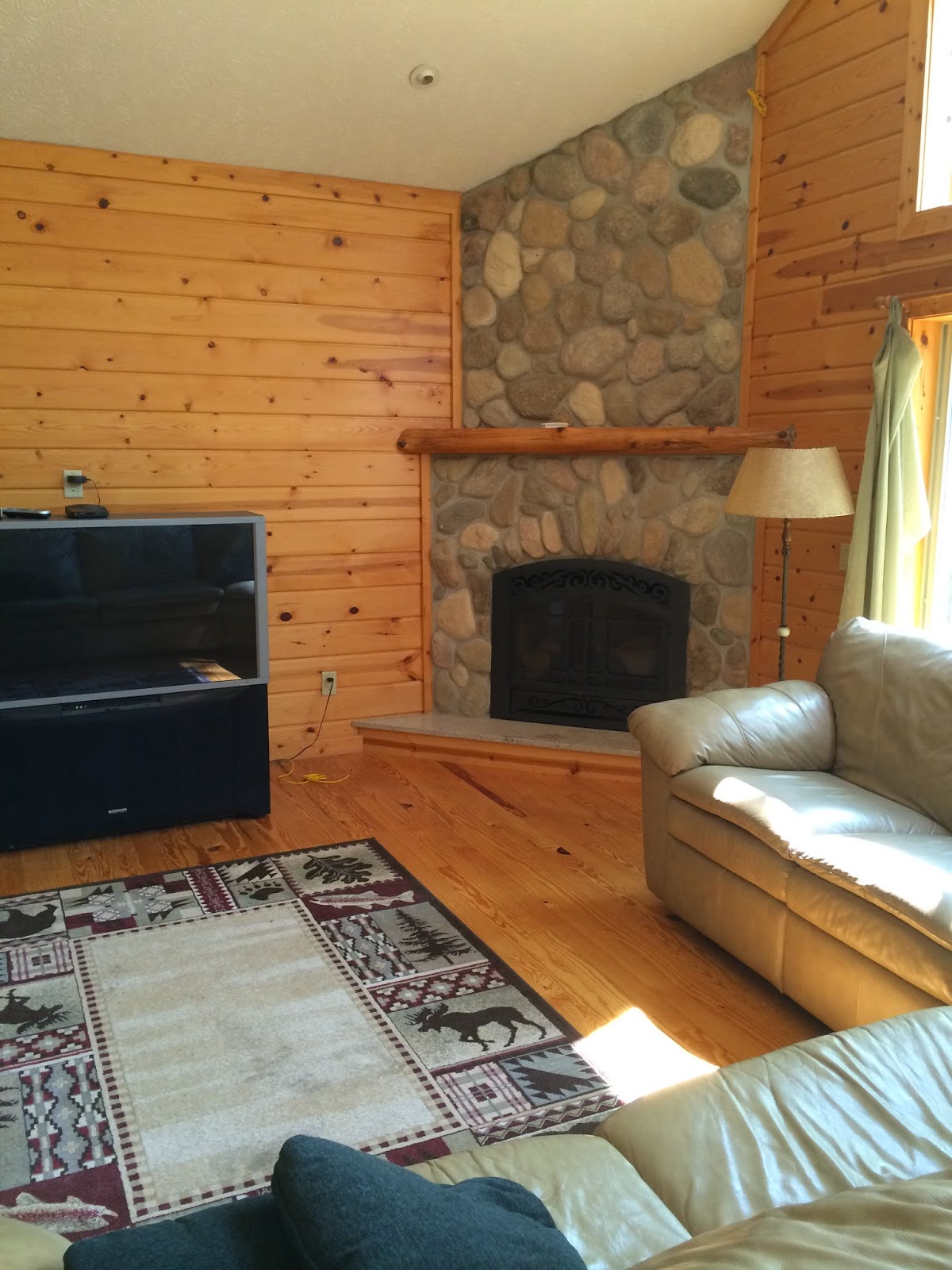 We congregated a lot on the big cabin deck. 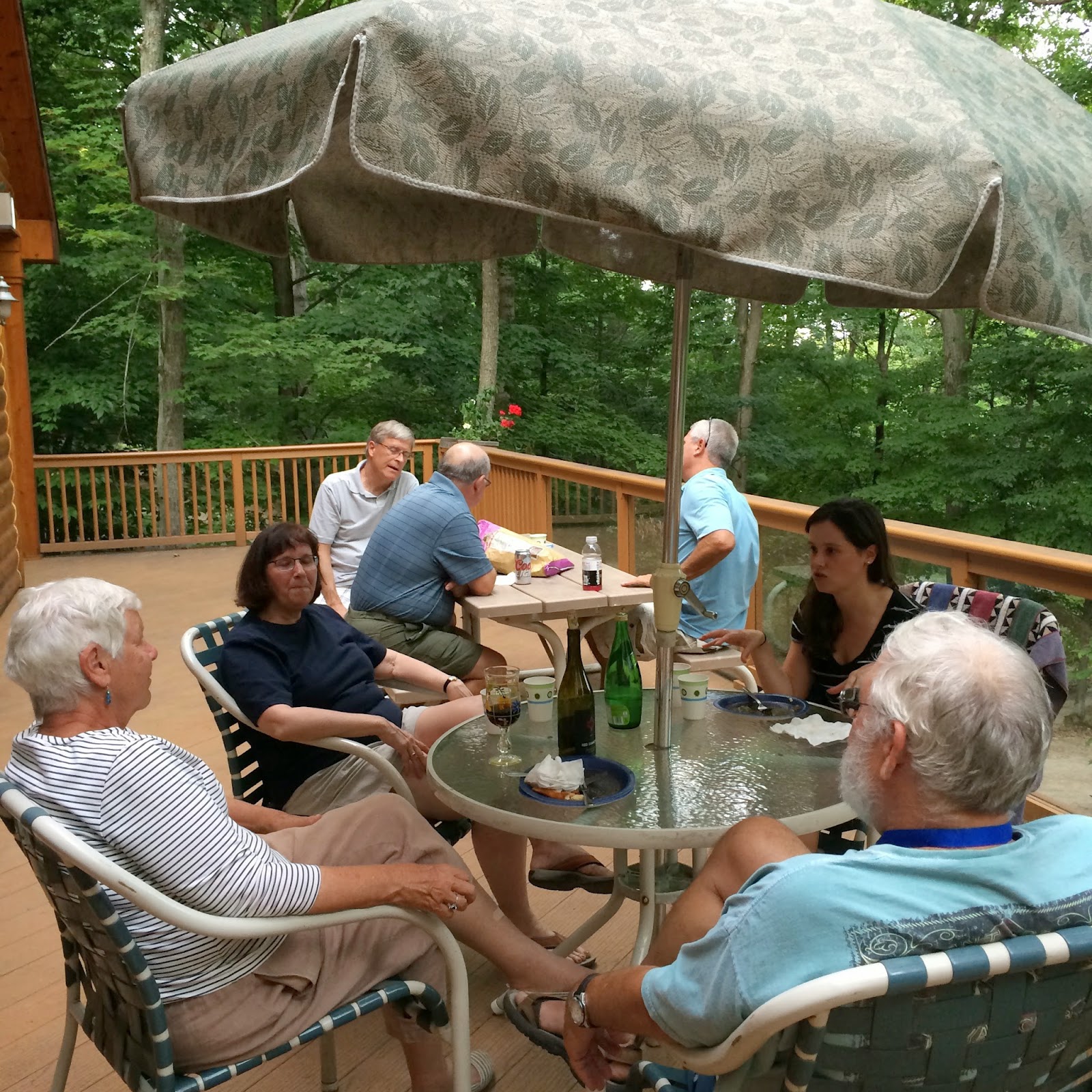 It was also AIR CONDITIONED, which most of the cabins DIDN'T have. We got lucky with the weather on that one. In the high seventies low eighties during the day, it cooled down to the fifties at night. No rain, and even more amazing NO MOSQUITOES to speak of. Not all week! Whew! More amenities for the large cabin---gas fireplace, gas grill, washer and dryer.  $1780 for the week.

On to some of the other cabins available...We stayed in cabin #8, which sleeps 4-6 people and has one nice bathroom. It had the best view of any of the cabins, with an upper deck overlooking the lake. The managers of the campground reside in the separate, ground level cabin below.  Our cabin had one queen bed which completely filled the bedroom along with one chest of drawers, and the bedroom patio door exited straight out to the stair steps. There's one double bed sofa bed in the great room. Had Sparky's daughter been there, she would have had to sleep on it. It was in terrible shape. The foam in the cushions no longer supported the weight of anybody sitting on the sofa during the day, and once you sat down, it was difficult to get back up! We doubt that sofa bed would be suitable for anybody to sleep on as bad a condition as it was in. The other bedroom with the bunk beds was TINY! Again, the twin bunks completely filled the little bedroom and one chest of drawers took care of the rest of the space. There was room for only one adult in the room at a time.

The microwave was very old and the door was badly cracked in one corner. The gas stove was an old one, and you could smell the fumes from the burning pilot light. The refrigerator light kept going out even after an effort to fix it. Despite some of the cabin's limitations, the knotty pine paneling and the bamboo wood floors with a very spacious open, great room/kitchen plan made for a wonderful atmosphere. It was a beautiful cabin despite needing some new furniture and appliances. No AC, a couple of small fans are provided. We were not having much luck getting the cool night air to cool down the cabin, so the manager went out and bought another fan, a nice big box fan to help keep us cool. We really appreciated that!  We sat out on the deck every morning and every night. The wrap around deck also had a picnic table so Sparky sat and crafted a few times during the week.      $1280 a week, $200 nightly.

Some additional things about Windjammer Resort....They don't provide sheets and towels. You have to bring your own! Guess most people drive in from not too far away. Sparky's sister drove up from the Detroit area and filled one car with beddings and linens so we could have some. Thanks, sis! They DO provide plenty of kitchen utensils and pots and pans.

The managers of the campground were absolutely wonderful....Keith and Theresa. Whatever we needed, they promptly tried to provide or fix. They were just great to deal with. They have a lot to deal with with many groups coming into a campground, some with unreasonable expectations. They manage, not own the campground, so they are limited in what they can do.

The common areas of the campground were just wonderful....A deck overlooking Spider Lake, two big porch swings, a common fire pit area and one big sandbox of a lot, which the little kids absolutely loved.

The entire campgrounds are all sand, so you are in a losing battle all week with sand coming into the cabins. No problem, with all wood floors, easy clean up!

There is a beach, but it's very tiny....wide enough for one row of deck chairs, and your feet are just about in the water. 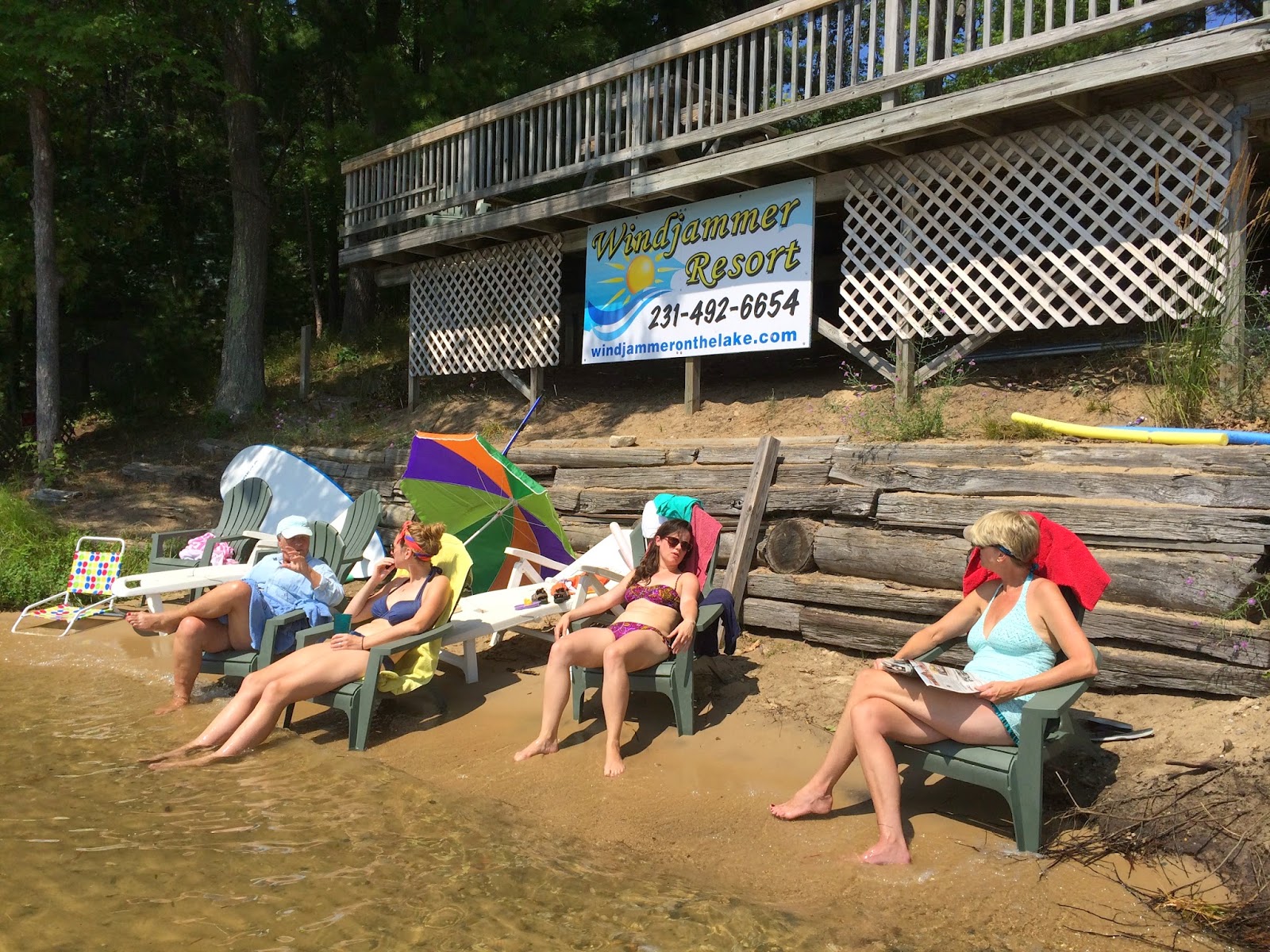 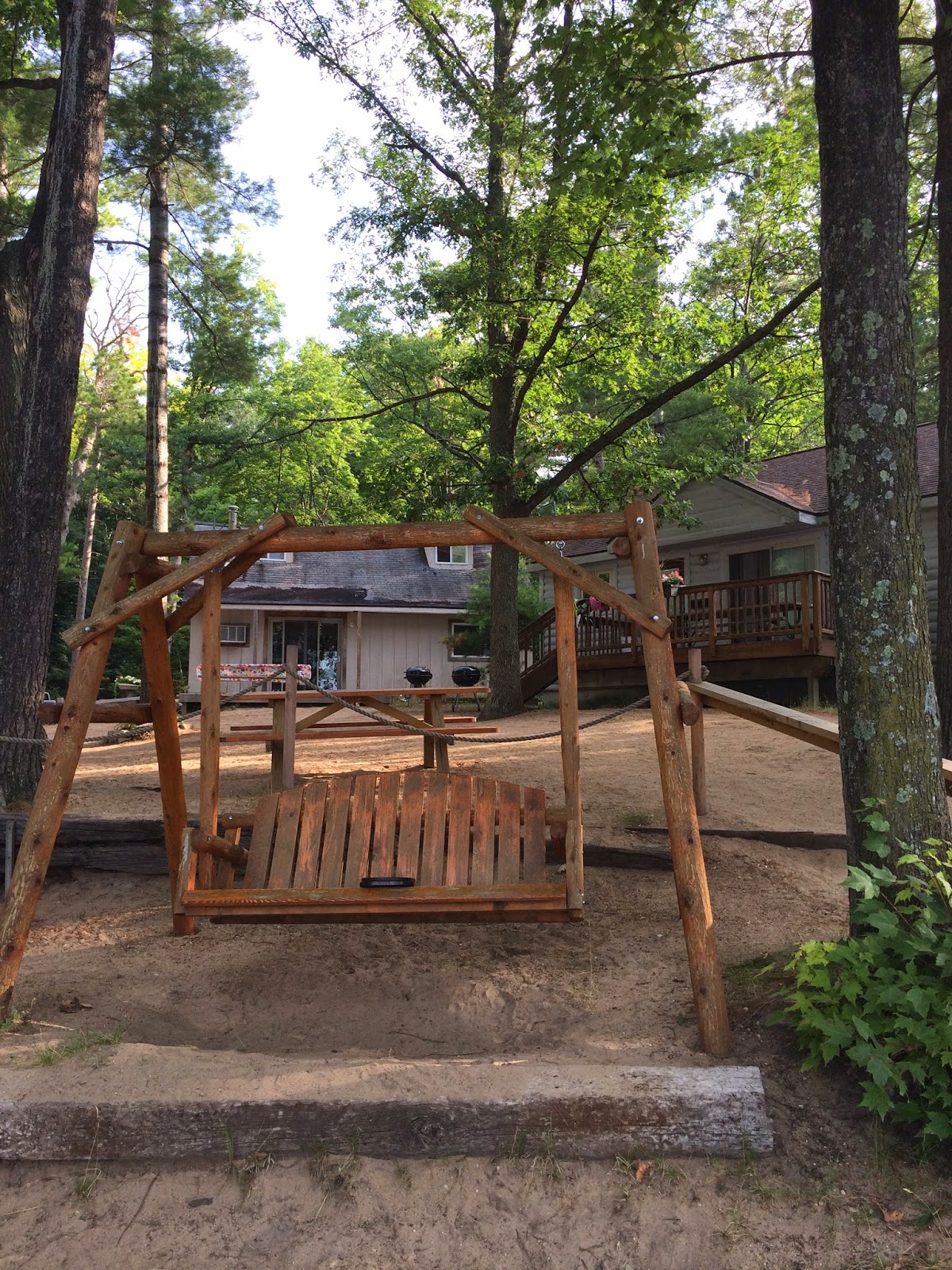 It's a clean sandy shallow bottom, so a great place for toddlers. There were LOTS of water toys---a pedal boat, FIVE kayaks and two rowboats. Sparky actually got out one morning to row for a little workout. But the rest of the time, Sparky got out and kayaked almost every day....There's a boat dock and two floating platforms which we used, too. The common areas where you can sit and picnic with family were just beautiful. Nice and shady...loved the two wooden swings and two gathering areas, one being the lower deck. 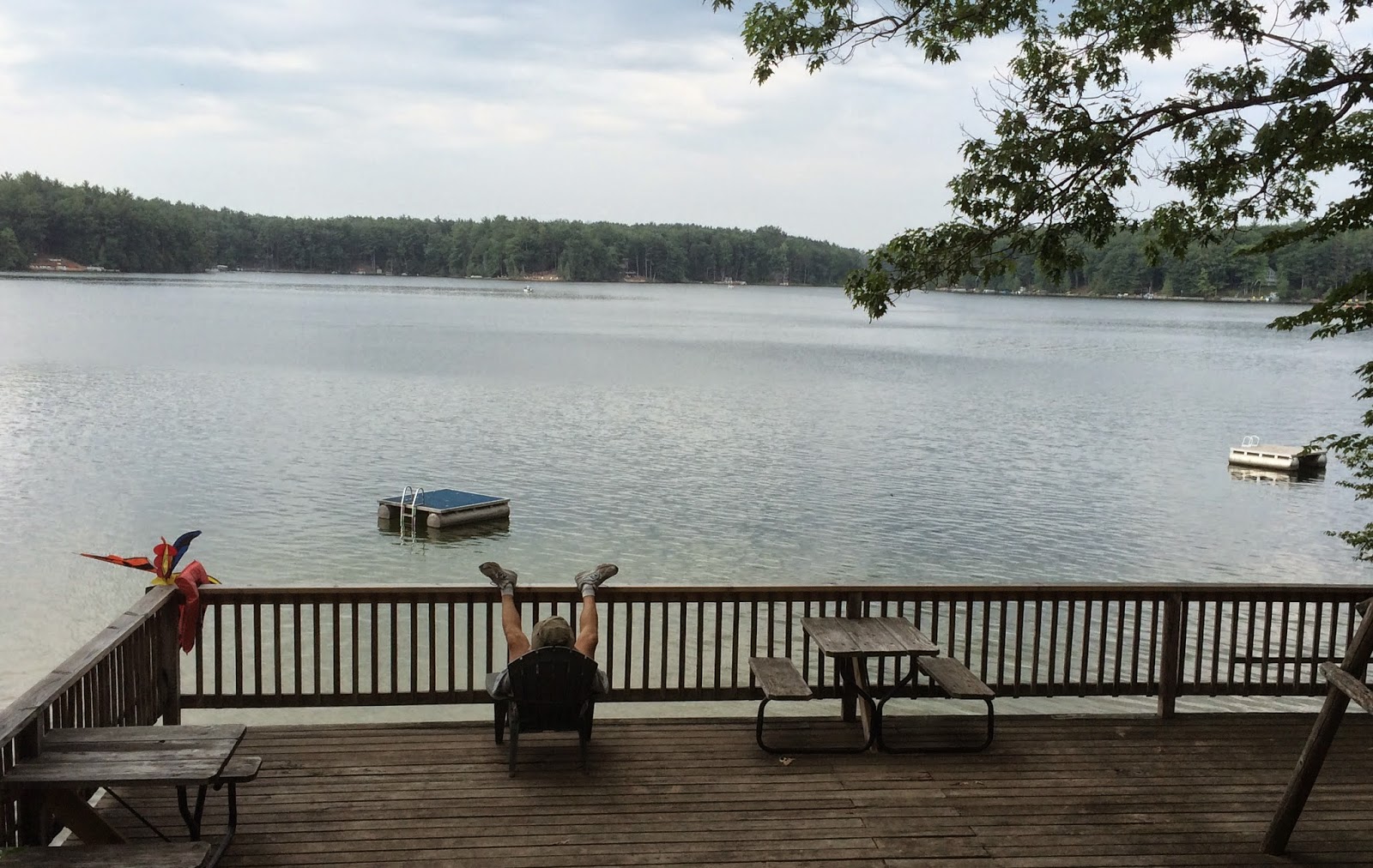 Overall, the campground resort was a terrific place for families....The only drawback, really, is that you share your cabin with seven other cabins in the common area, so you need to come with a good attitude---barking dogs, noisy children, and late night campfires and loud conversations are all possibilities here. Because our family took up several of the cabins, we didn't have to worry about that! (We didn't have any barking dogs and we all pooped out by 10:00 PM) Peak season is June through Labor Day, and mostly weekly rentals are available during that time unless there's availability. In that case, they have a three day minimum rental. They are open all year round. Nice breeze off the lake most days....plenty of shade to sit and read...The lake was wonderful and fun to explore. We saw LOTS of wildlife...More about that next time....We loved it.....