Sparky wishes she could say that she saw them come out...We headed over for a third time to Coquina Beach where there are at least six marked turtle nests. The last time we were there, all six nests were dormant but the signs were still up, so we knew they hadn't hatched yet. This morning, about two weeks later, we were over to the beach early early, before sunrise. Three of the nests had already been hatched. The signs had come down, we knew the babies had come and gone....They usually come out at night, so our chances of seeing them in the early dawn were slim to none.

Somehow, a guy over in Vero Beach happened to be on hand when some baby leatherback turtles started scratching above their heads. He saw the sand moving, trained his camera on the spot, and he caught the very first wave of babies. Here they come! You've gotta watch this, as it's just about impossible to be on hand for an amazing event such as this, and he captured it from start to finish...Thank you, Rick Bryant for sharing with your friends whom in turn, shared it on Facebook and it made its way here. ..Here's the link:
https://www.facebook.com/photo.php?v=564407943626810&set=vb.100001728280142&type=2&theater

If that link doesn't work, you can go to my timeline page and see it there....I've watched it several times now, and it is just a wonderful thing to see....Jeannie Sparks

What else is new with Sparky and Eldo? Not too much...we've been going to estate sales AGAIN, and looking for bargains...Sparky saw a pair of "lawyer" bookcases yesterday, for 80.00. The bookcases had the lift up glass windows that slide back so you can get at your books and knickknacks, or stuff, and thought a pair of those would be great for fabric storage in the craft room. Back we went today, thinking we'd catch them at half off, or marked down a bit, but Sparky missed the sale by minutes. SOLD! to another person. Phooey! Oh, well...another bargain might come up again one of these days....Saw a huge jigsaw puzzle that was all about the different kinds of palm trees. Sparky hates jigsaw puzzles, too much concentration required on those 500-1,000 puzzle pieces . so she passed it by, but not before taking just a couple of photos of the box front to learn about some of the palms that are here in Florida. Eldy says he saw somewhere that there are over 2500 species of palm trees and just about all of them can be grown in Florida! 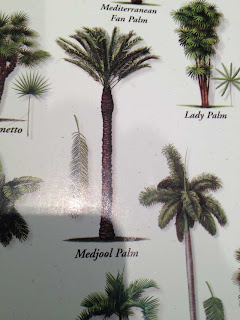 A trip to Hobby Lobby to stock up on fall greens and fall flowers to make wreaths....Finished my daughter's copycat hat from Etsy. Here it is on the original model. She was selling this hat on Etsy for 90.00 but it's no longer available, so I thought I'd try my hand at recreating it for Kerry. 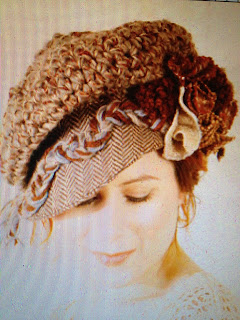 And here's my version. It's barely on my head as my head is too big for it.

Turned out pretty cute, but it will look a lot cuter on her! Hope it fits! And that's all folks, for now.....