Actually, Sparky is back already, still trying to catch up on the blog...Almost there...When Sparky's daughter returned home from her deployment, it was time for Sparky to relinquish Kelly's car and return it to her daughter, after getting to use it for a year. So-o-o-o-o, road trip here we come! Eldy had his own road trip to Indiana at the same time to see his granddaughter play golf in a tournament, so we were heading in different directions for a change....

A great ride to Virginia....Interstate 95 most of the way...Nice road, nice drive....Sparky took her time, stopping at various junctions for a rest and to see what's what....This was at a gas stop in northern Florida....They advertised Florida orange juice and gators, a large stuffed one and live babies in a tank. Of course Sparky had to stop! "LIVE GATORS!" 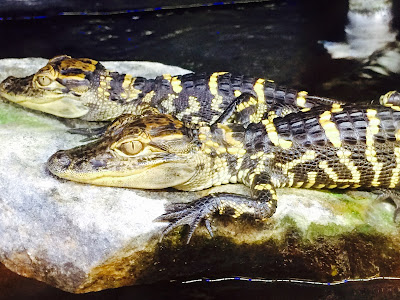 Nice welcome centers...here's South Carolina's welcome center...Sparky picked up a few brochures like she always does, and a road map. Just in case.....They really do have beautiful welcome centers along I-95. 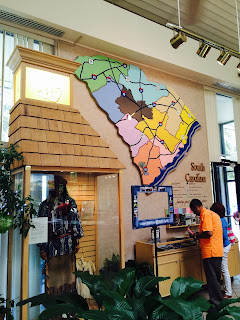 Sparky started seeing corny signs for "SOB"--South of the Border....A tourist attraction that has been around since 1949. It's really kind of cheesy and headed towards the fate of many popular tourist roadside attractions that were the heyday in the fifties--downhill, but the website continues to do a great job of promoting it, and so do all the billboards along I-95. Sparky thinks there must have been a least 50 billboards heading toward the border of South Carolina and North Carolina. The billboards were really corny....

How about this one?

So of course, Sparky had to stop....After all, South of the Border is on America's Roadside America's list of must see's.....It's a huge place, but almost nobody was there mid morning the day Sparky stopped. It looked very dated, but fun! 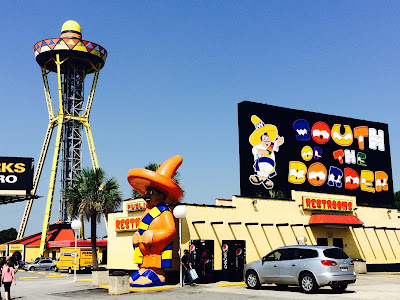 The 97-foot Pedro, which stands adjacent to the Mexico Shop East and the Sombrero Restaurant, has 4 miles of wiring and weighs 77 tons. He stands 18 feet deep in solid clay. You can drive your car through the legs of the “Big Man”, as some may call it.

There's an interesting story behind South of the Border and how it grew over the years, if you click on the link above....It's a little town within a town, and friends say it even has a nice campground on the premises as well, called Camp Pedro--100 sites, with 30 and 50 amp hookups. There's a reptile lagoon, an amusement park, a motel, and a sombrero observation tower 200 feet high. There's shopping on the grounds, too. There's a Myrtle Beach shop designed to get you ready for the shores, a leather shop, a Hats Around the World shop, and an antique shop!  Guess it's still going great after all these years! But it was time for Sparky to hop back in the car and get going again....

Sparky split the trip of 900 miles into two days. No Paul Dahl driving for her! (An inside joke for RVer's about an RVer who has since obtained legendary fame as a guy who LOVES to drive very long distances in his RV.) Fellow RVers call it Paul Dahl syndrome,  or something similar, if you drive a high number of highway miles in a day. She stopped in Walterboro, S.C. for the night, a place she picked because it had a nature preserve with boardwalks within just a few miles of I-95.  Walterboro is in the northeast corner of the state, getting close to North Carolina. Sparky pulled in early enough to check into a motel, and then checked out the preserve for a little hike before it got dark.

Walterboro Wildlife Sanctuary is within 3 minutes of I-95. It's located within the ACE Basin, the East Coast's largest estuarine preserve and has 842 acres. It has hiking, biking, and canoe trails. The literature says is might be the only "braided creek" swamp highlighting low country nature that is available for the public. Sparky is not quite sure what a braided swamp means, but guesses that there are "feeders" leading into and out of the swamp area. It has 3 miles of hiking and biking trails. They seemed nice. The boardwalks were cool and went for quite a ways. There were many of them intersecting and crossing in different places. This would be a wonderful walk in the fall! 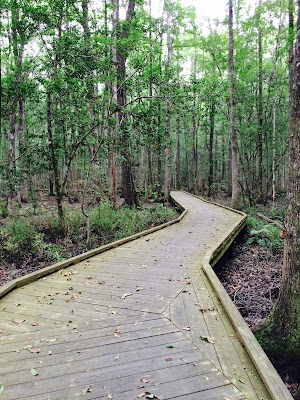 The day Sparky visited, it was a little disappointing...The swamp was completely dried up in the section she hiked...It was very buggy and almost depressing the day of the visit. The website description makes you think this is a fairly modern and up to date sanctuary, opened in 2013, with lots of future plans for it coming up. However, the atmosphere was depressing. The preserve features appeared as though they weren't being well maintained. Sparky saw downed tree limb debris on the boardwalks, a hole in one of the planked paths, and foliage overrunning some of the walking and biking paths. Of course, it was a dreary day, too, and that just makes everything seem old and dirty. And, it's a swamp for heaven's sake! Black bottomland swampland. Of course it's going to be buggy! Sparky forgot bug spray. Ugh!  As far as nature, Sparky didn't see anything but she did hear some interesting bird calls.

The next morning, Sparky was off driving once again...getting closer to her destination and her daughter! Next time, see you in Virginia!
Posted by Jeannie and Eldy at 8:00 AM